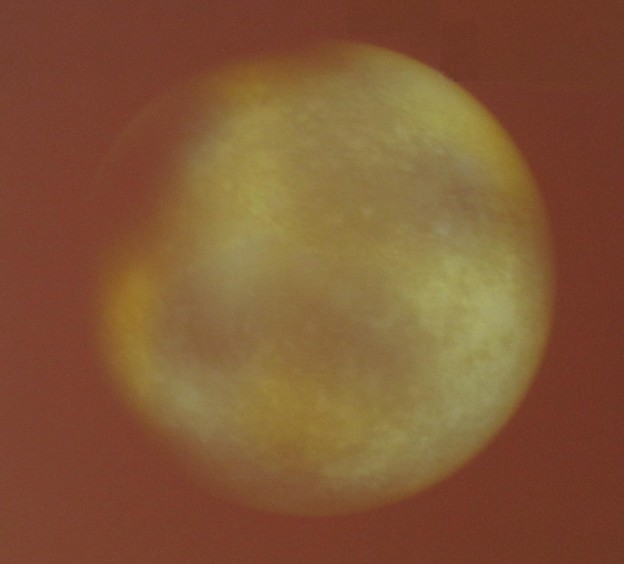 This entry is a summary of talks presented at the Interiors session July 24th, 2013, during the Pluto Science Conference in Laurel, MD being held this week July 22-26, 2013.

Christophe Sotin (JPL) began the session with a talk entitled “Processes involved in the evolution of Pluto’s interior Structure.” He started his talk with a comparison of model of the interiors of Ceres, Callisto, Enceladus, Pluto (McCord & Sotin, 2005; McKinnon & Mueller, 1986; and Simonelli & Reynolds 1989). More recent models propose the existence of a liquid layer between an icy surface and a rocky core (Hussman et al 2006). This layer of liquid changes the way heat is transferred to the ice crust. If liquid methane could form at the base of the ice layer, forming a “sub surface ocean”, it would react with water and form stable methane clathrates. The presence and thickness of the “clathrate layer” affects the thickness of the ice crust above it. 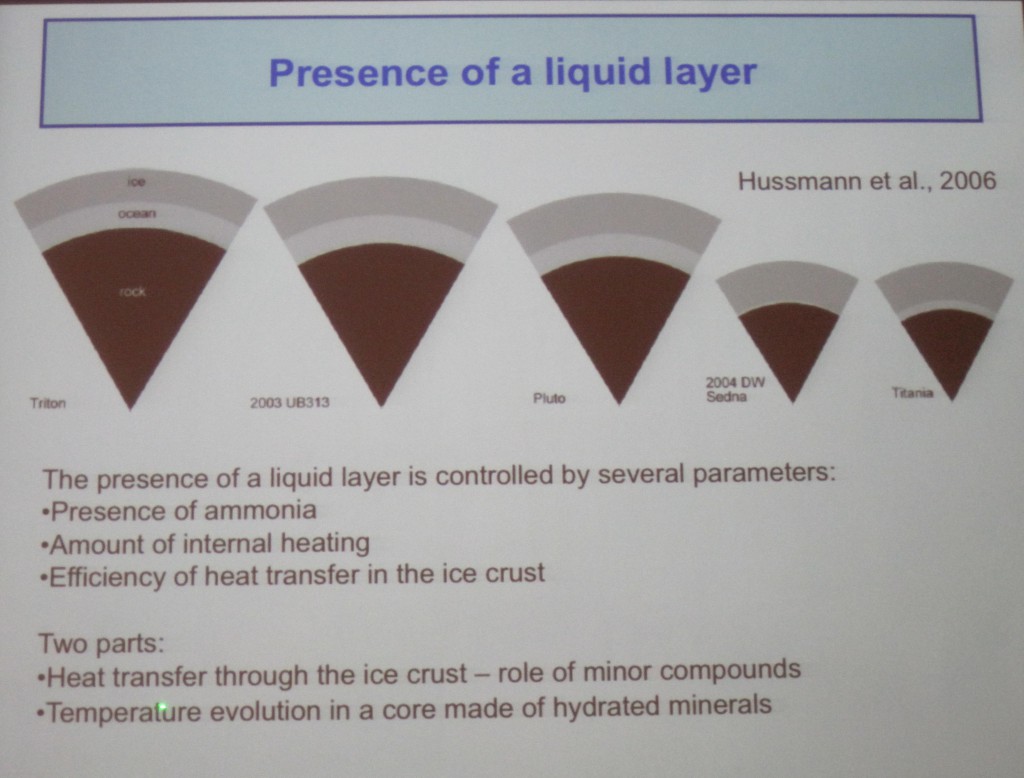 Conclusions. In their interior models, minor components (e.g. NH3) play important roles in both the characteristics (e.g. thickness) and dynamics of the ice crust. They need laboratory experiments to study the relative stability of the clathrate hydrates.  Hydrated silicates (e.g. antigorite) are likely to be the make-up of the Pluto core.  It will undergo dehydration some 100 Myrs to Gyrs after accretion. Convection within the core. The presence of a subsurface ocean depends on the presence of minor components.

The term clathrate is used to describe a structure that consisting of a lattice that traps or contains molecules.

Francis Nimmo (UC Santa Cruz) followed to provide some suggestions of surface observational evidence to probe the “Interiors of Pluto and Charon.”

Shape is Important. Shape tells us whether a body responds like a fluid. If the body behaves like a fluid (i.e., behaves hydrostatically), you can compute the moment of inertia. This, in turn can tells us something about the interior (i.e., is it differentiated or not). There is a caveat that differentiation can also occur due to radioactive decay. Differentiation happens when ice melts, so it tells us about thermal evolution. 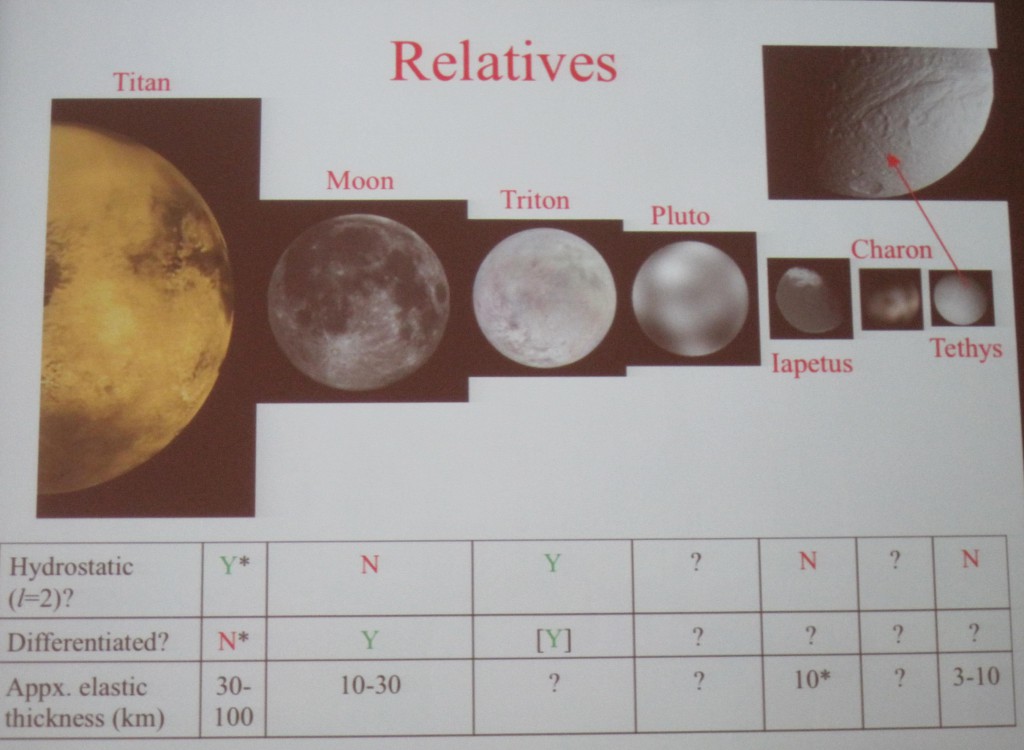 Comparative study of other bodies in the outer solar system and what we know about their interiors.

Evolution of Shapes. Early on, Pluto & Charon are rotating quickly, and are distorted. Pluto and Charon change shapes in the first few to 100 Myr if fluid or elastic, respectively, as their spin rate slows down and Charon moves outward. The spin rates influence their shapes.

What leads to Oceans? A conductive (no convection) ice shell is required to make an ocean (Desch et al 2009). This shell basically lets the heat out from the core. This heating then melts the bottom of the ice shell creating an ocean. The presence of an ocean changes the stress history. In the creation of an ocean, you are replacing low-density ice with higher density water and this introduces compression stresses. If you see things like the Tyre crater on Jupiter’s moon Europa, a multi-ring impact that implies there was an ocean. Whether or not an ocean is present has important astrobiology & geophysics consequences. If you introduce an ocean, you never have a fossil bulge. If you do not have an ocean, you could get a fossil bulge.

A fossil bulge is a bulge that froze into shape before the satellite synchronized its rotation.

Martin Paetzold (Universitat zu Koln, Germany) spoke about “Mass Determination of Pluto and Charon from NH’s REX Radio Science Observation.” During the fly-by, Pluto will perturb the New Horizons spacecraft velocity just slightly and this will be recorded as a tiny Doppler shift of the X-band (8.4 GHz) radio carrier frequency. This information will be used to measure the mass, or more specifically, the product GM (universal gravity constant times the mass), of Pluto.  There are two different ways to obtain this data during the New Horizons mission: (1) Using two-way ranging a week before the encounter and week after the encounter, and (2) During the encounter, the REX uplink instrument (operating at 7.1 GHz) will have a series of measurements during the days around closest approach. They hope to obtain 0.15% accuracy for the first method and 0.04% for the second method. The best results utilize both methods potentially deriving an estimate of Pluto & Charon masses with an accuracy of 0.01%. They are currently looking at the small forces file, which is the measure of the attitude performance during thruster firing.

James Roberts (JHU/APL) spoke about “Tidal Constraints on the Interiors of Pluto and Charon.” Thermal evolution of Pluto & Charon is a key question for scientists to answer. But thermal models are dependent on interior structure. At present we do not know whether Pluto or Charon are homogeneous (i.e. same material throughout) or differentiated (split into a core and crust, or maybe core, subsurface ocean and crust). Typical methods used to probe interiors are Kepler’s 3rd Law, Bulk density, Moment of Inertia, Gravity, Magnetism, Radar, Seismology, Tides. For New Horizons, as the fly-by is not that close, Gravity is not a viable method; the lack of a magnetometer aboard rules out Magnetism, and Seismology requires the spacecraft to land, also not possible. He described their approach  that will use Shape Modeling to measure a Tidal Bulge. Both Pluto and Charon may each raise a tidal bulge on the other. He cautioned that we may not be able to determined the existence of an ocean using a shape model.

Steve Desch (Arizona State University) spoke on “Using Charon’s Density to Constrain Models of the Formation of the Pluto System.” The unique Pluto-Charon system has been modeled as arising from the impact of two large Kuiper Belt Objects (KBOs). This had been presented on July 23rd by Robin Canup. Steve Desch’s model takes two differentiated KBO bodies (but they must have a thick crust) in a disk and collides them. Parts from the bodies’ inner core, plus some ice, forms Pluto and the outer icy mantles form Charon & the other moons. He addressed that the initial differentiated KBOs with r=600-1200 km could exist (Desch et al 2009, Rubin et al 2013). The outcomes of this model create a dense Charon (density= 1.63 g/cm3) because Charon would have been formed from the outer regions of the initial KBOs, and those objects are characterized with thick crusts.  This is the alternative model that was not preferred by Robin Canup in her talk yesterday. This remains an active area of study.

Wrapping up this 3rd day of a dynamic conference we learned that we still have a lot more questions about the formation and the interior or Pluto, Charon or any of these icy bodies in the Outer Solar System. New Horizons will indeed bring an revolutionary dataset to allow to direct investigation of surface features, overall shapes, masses, and orbital dynamics, all which will constrain models of what these bodies are made of and how they formed.