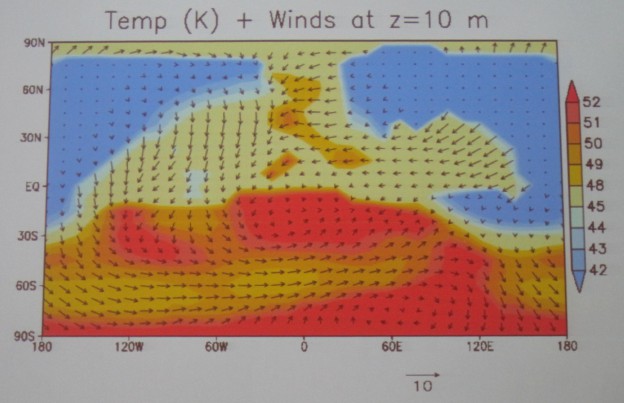 Talk summaries from the Pluto Science Conference held July 22-26, 2013 in Laurel, MD continues. This blog entry is about atmosphere presentations on July 26th.

She presented her model, based on the MIT (Massachusetts Institute of Technology) GCM that was originally designed as an ocean model. She turned it upside down to make it an atmosphere model. It has multiple layers, CH4 mixing ratio at 1%, CO mixing ratio at 0.05%, includes atmosphere models (Strobel et al 1996) and runs for a 15 year Earth integration rate (she notes that is probably not enough time to have the atmosphere equilibrate). She sets frost layers on the surface as a parameter, and explored different surface pressures (8 16, 24 microbars). She uses the Ecliptic North convention. One output from this model are curves of temperature vs. altitude, called a temperature profile. She reported the presence of a frost predicts a much colder atmosphere. Future work will be to investigate other ice distributions, put in a CH4 transport model, and improve surface model. 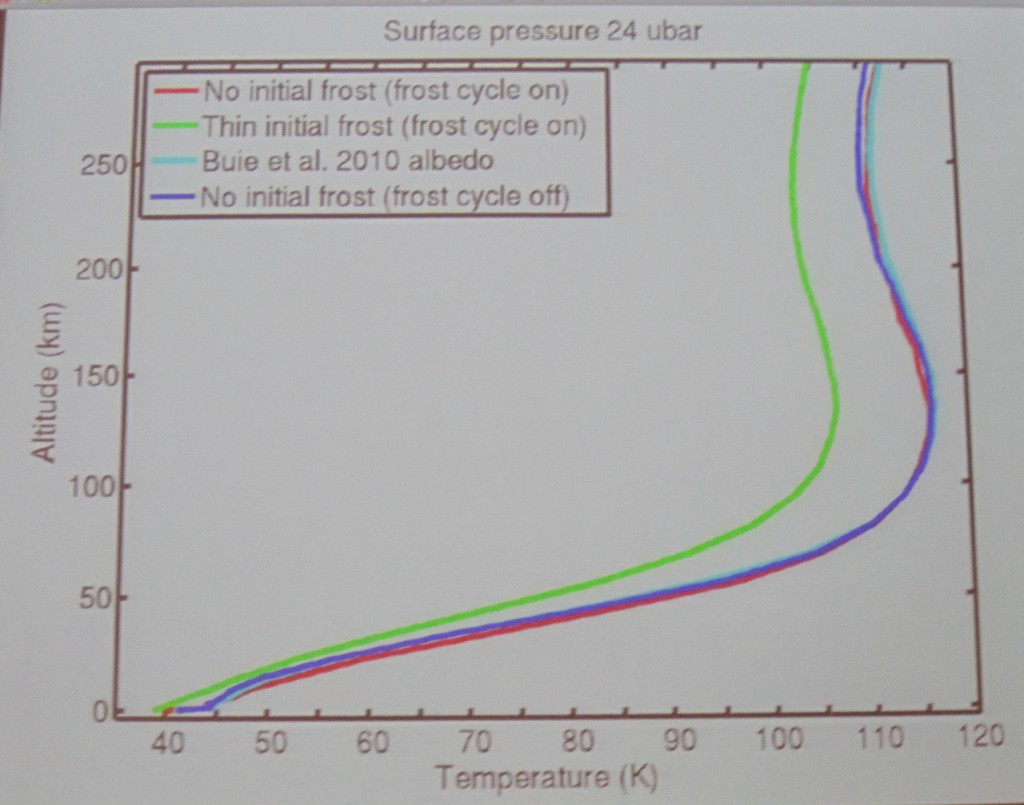 Example of a suite of temperature profile curves from the Pluto MIT GCM. Temperature in Kelvin is shown for a range of altitudes in kilometers. The MIT GCM has assumed a particular Pluto radius to set zero altitude.

Melanie Vangvichith (LMD, Paris) in her talk “A Complete 3D Global Climate Model (GCM) of the Atmosphere of Pluto” presented another general circulation model for Pluto, the LMD (Dynamic Meteorology Lab) GCM. For a thin atmosphere that is expected on Pluto, their model uses careful parametizations of the nitrogen condensation and sublimation surface-atmosphere processes, which they claim is key (Forget et al 1998). They also adopt a particular initial frost distribution, the distribution from Lellouch et al 2000.  Their model is run for 140 Earth years, starting with 1988 adopting initial conditions based on observations. Conclusions. When adopting a 20 MKS thermal inertia, the model is in agreement with occultation data to date, but this model does not predict a troposphere, just a “big stratosphere.” 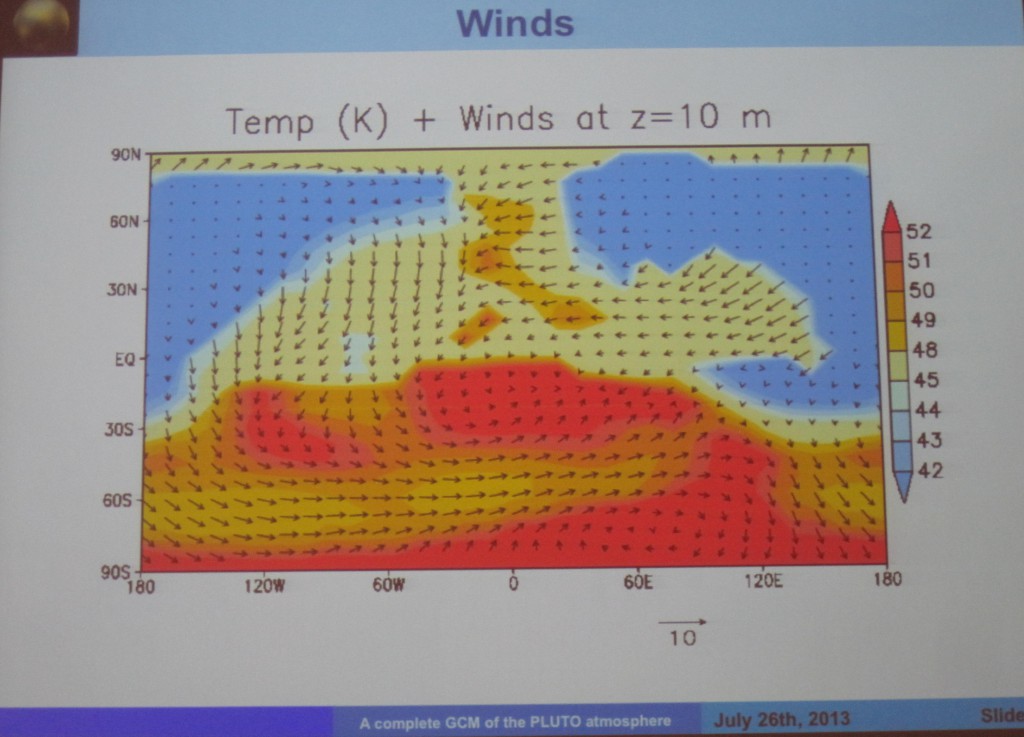 Example of a wind prediction from the Pluto LMD GCM. The temperatures (in K) are represented by the color and the arrows represent the wind direction and speed at particular height. This is mapped onto a lat/long grid using the right-hand-rule (i.e. matches the Marc Buie convention).

In the previous entry, I had commented on thermal inertia and its role in atmosphere dynamics. To recap here, thermal inertia is a measure of the ability of a material to conduct and store heat. In the context of planetary science, it is a measure of the subsurface’s ability to store heat during the day and reradiate it during the night. This has natural consequences for deriving what happens to processes that require an exchange of heat. A GCM uses thermal inertia of the surface as a key parameter. There is a currently big disconnect in the community over what Pluto’s thermal inertia is. In E. Lellouch’s talk on Jul 23 he reported that Spitzer & Herschel have measured Pluto’s thermal inertia as 20-30 MKS (Lellouch et al 2011). However, Pluto atmosphere pressure models needed to match occultation data by C. Olkin & L. Young require Pluto have a much higher thermal inertia >1000 MKS to explain their occultation measurements (this meeting). Thermal inertia is usually quoted in MKS units, where MKS is an abbreviation for “J K-1 m-2 s-1/2.”

Anthony Toigo  (JHU/APL) with his talk “The Atmosphere and Nitrogen Cycle on Pluto as Simulated by the PlutoWRF General Circulation Model” presented a third general circular model. Their GCM is based on the terrestrial model used for Weather Research and Forecasting (WRF). It has been adopted for Mars, Titan and Jupiter, and they have adopted it for Pluto.  They ran their model for two extremes of thermal inertia, as this is a current open question in the community. They are just attempting to see what effect this has on the predictions.  They also looked at the effect of the nitrogen cycle adjusting amount of nitrogen ice. Conclusions. The model is in agreement with the increase in pressure derived from observations, supports large volatile abundances, and shows a pole-to-pole transport. Future work for Pluto includes constraining the volatile cycle and looking at surface wind relations.

The three modelers sparked a lively debate at the Pluto Science Conference. Sometimes they agree and in many cases they diverge greatly. It was neat to see how different groups tackle the same physics problem. It came down to the details and initial assumptions. GCMs have become such powerful tools to describe dynamics (changes) in atmospheres, but because there are still so many assumptions about Pluto’s surface and atmosphere, it will only be until New Horizons provides measurements to start anchoring down these models.