This is the first of a three-blog series (part 2 here, part 3 here) of this little scientist’s first foray into microgravity research. I participated in a research flight provided by the Zero-G corporation. To read more about their company go to https://www.gozerog.com/.

Zero-G operates a Boeing 727-200F aircraft, “G-Force One,” specially modified for reduced gravity operations. They provide opportunities for research flights (people and equipment) and also opportunities for you to experience zero-G (people). For experiment/research flights, you can apply directly to Zero-G where they organize a flight once they have enough researchers to fill a flight, or apply to NASA through their Flight Opportunities program https://flightopportunities.nasa.gov/, when NASA organizes the flight-manifest and Zero-G provides the flight platform. University students have additional opportunities to get flights through NASA’s Microgravity University, http://microgravityuniversity.jsc.nasa.gov/, with annual proposal calls. Had I known this when I was at school, I totally would have been a veteran flyer by now! Aircraft doing parabolic flight profiles are not restricted to the USA or to NASA. One list is provided here http://en.wikipedia.org/wiki/Reduced_gravity_aircraft.

The day before the flight, the flight director and series of “coaches” provided by the Zero G Corporation, came around to each of the research groups to look at the payloads and ascertain safety items. Prior to our arriving at our departure airport (in our case, Titusville, FL, but the “G-Force One” does fly from many airports, see their website), each team had to complete a Research Package, which contains the usual information such as mass, volume, power (including specifying “kill switch” items) and particular requests for gravity (the pilots can fly the airplane to simulate Martian and Lunar gravity in addition to near zero-G).  A series of weekly telecons were held in the weeks leading up to the flight to discuss interface needs and potential interference issues with others sharing the flight.

We meet the other teams for the first time. There were 6 experiments aboard this flight along with a BBC crew for the show Stargazing Live. One of the BBC presenters, Dara Ó Briain, joined us on this flight. So Kimberly gets to be an (unnamed) extra on TV show!

The other research experiments included (1) CubeSat solar-sail deployment mechanism, (2) testing a new IMU (inertia measurement unit), (3) evaluating sedimentations under Martian gravity, (4) Australian company developing ways to brew, and pour beer in zero-gravity, and (5) a mystery payload as it was under a NDA (non-disclosure agreement) with Zero G. Our Box of Rock science experiment (BORE) plus the SWUIS (Southwest Universal Imaging System) operations experiment rounded us to a total of 7 unique experiments. It was very fun getting to know the other experimenters, many who were also first timers!

(left) Our two payloads in the hotel before driving out to the airport. (right) Easy to transport our suitcase-sized payloads to the airfield.

The Test Readiness Review (TRR) was held in a hangar near the plane. Each group had to show the Zero-G staff the exact payload and configuration and describe the experiment in more detail and call attention to unique configurations and requests. In our case, we were going to use both blue tooth and wireless communication to monitor our payloads during the flight, so this meant an interference test with the airplane would need to be scheduled later in the day. The reviewers were mainly concerned about safety, safety to ourselves, safety to fellow passengers and equipment nearby, and safety to the airplane. For example, we had filed down edges on our payload, but due to the free-floating nature of the experiment, they requested we “foam our edges.” As we had experienced flyers with us, we had brought foam pipe-insulation with us and, of course, the ever-essential duct tape.  However, we had to send a few members of our team over lunch to Home Depot to pick up some more. Duct tape and foam were the order of the day!

Assembling BORE for the TRR. No shortage of duct tape and foam.

Assembling SWUIS and showing the layout of the tethering cables.

After the TRR, we waited for our time to set up in the aircraft. Along the floor of the aircraft are designated hook points. All payloads need to be secured to the floor with straps. For those that are “free-floating” they need to be secured within a storage box, whose dimensions were given to use prior. In our case, we configured our two free floating payloads to the size of two suitcase volumes. With our team of six, we identified where wanted our “footholds” to help keep us in place. These footholds were manually installed by the Zero-G folks and torqued down. 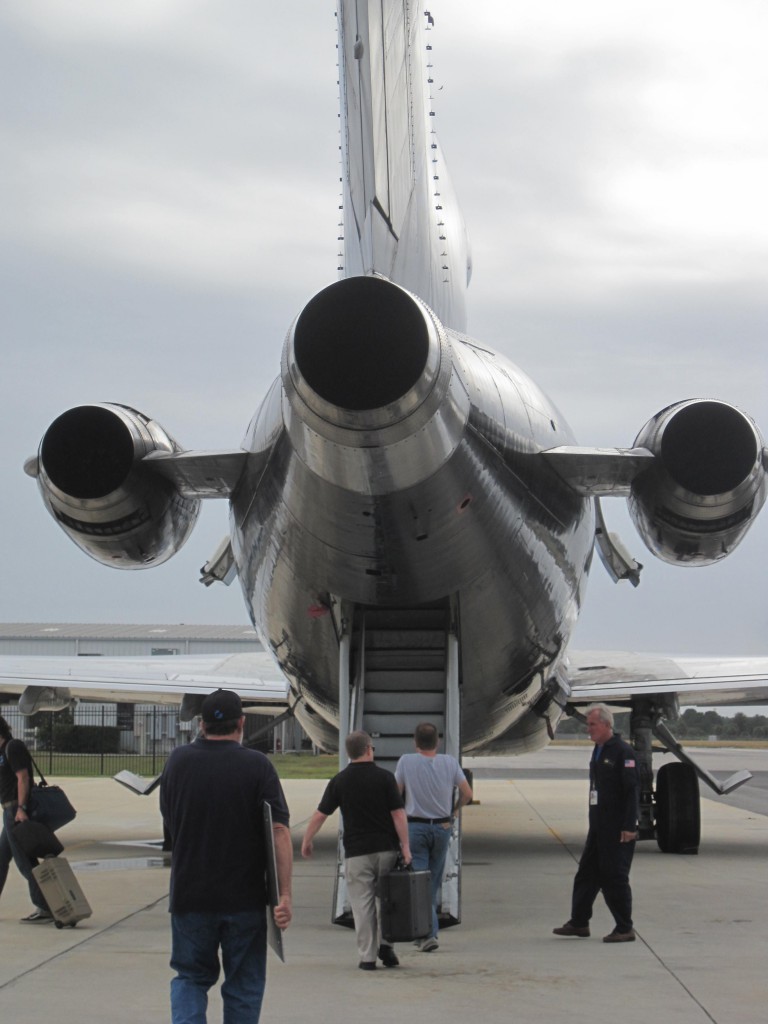 Loading up the plane via the back door to this Boeing 727. Not shown is that is another way to enter the aircraft via a large cargo bay door that can be opened on the side of the fuselage for larger payloads. For this flight, all the researcher’s experiments were all hand carried and broken down into smaller suitcase sized parts.

(left) Securing one of the other experiments to the floor of the aircraft. You can see the large cargo door opened to the left. It was a hot day in Titusville, FL so it made setting up a bit cooler to have air circulating. (middle) Using loads of Velcro to provide “temporary” binding for our free-floating experiments during the high-G times. (right) Setting up and installing the foot straps (red cords) to specific locations on the  floor.

During this setup we learned where each group would be physically situated on board and we could re-assess interference items not previously considered. Each experimenter group was assigned a 10 foot x10 foot area on the plane and were designated by the color of their socks. We were the “grey team” and had a spot about half-way down the aircraft near the exit windows.

After the configuration of all the mechanical hold-down areas, we did our powered tests and also checked for interference. All looked good. Anything we would bring the next day to board the flight had to fit in our flight suit. We next stowed our two suitcase payloads for takeoff and headed back to the hotel for a team briefing and light dinner.