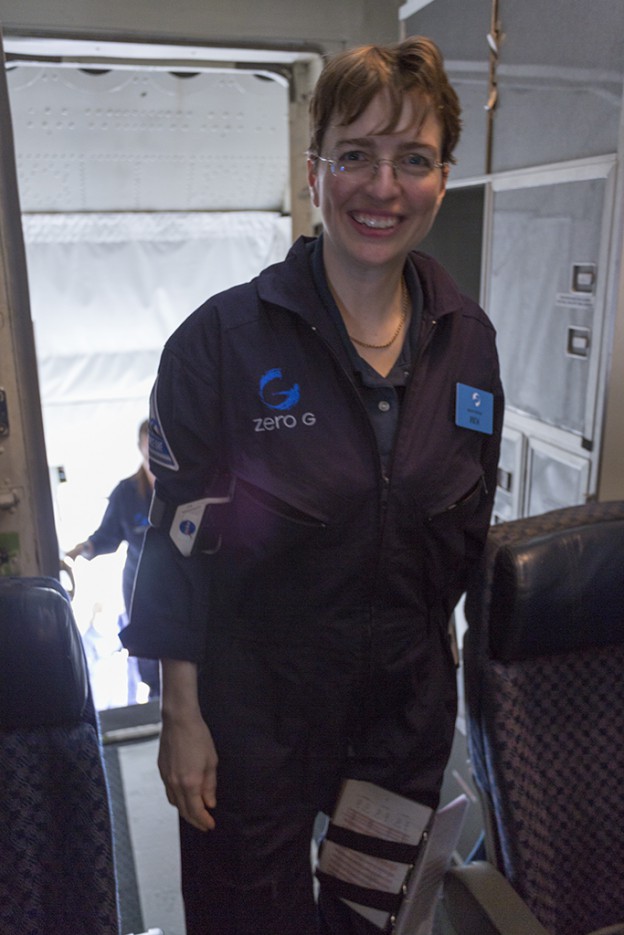 This is a second entry (part one here, part three here) of a three part blog series about my recent experience in microgravity. 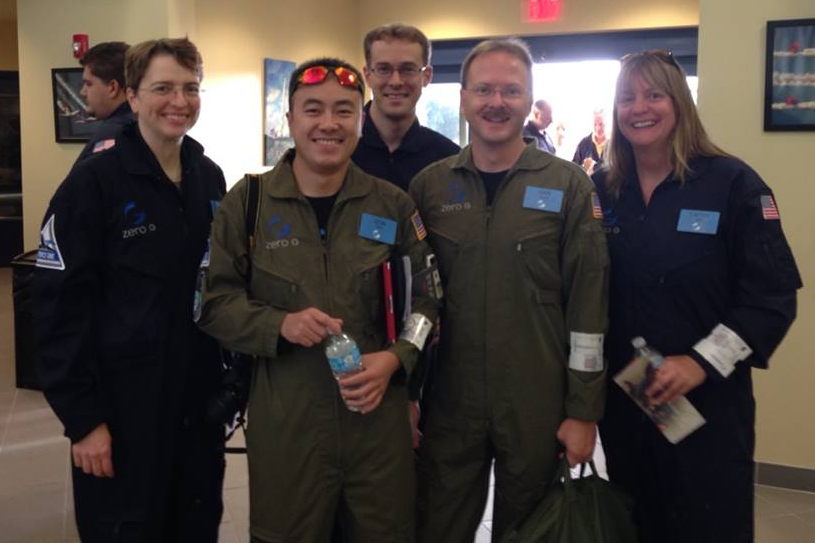 The team is outfitted in their flight suits ready to go! left –to-right Kimberly Ennico (me), Con Tsang, Eric Schindhelm, Dan Durda, and Cathy Olkin. The photo was taken by Alan Stern, another member of the team, rounding us to six flyers. Con & Cathy had flown once before. Dan & Alan had multiple flight histories. It was Eric & I to savor the first-time-flyer award. All my colleagues work at the Southwest Research Institute in Boulder, Colorado.

In writing this blog entry, I still giggle at recalling the moments before the flight. We actually had a TSA check before boarding the plane. Now, pretty much every person has a go-pro or a recorder strapped to some limb, all carefully secured in the pockets of his/her flight suit. So as each person went through security, all the pockets had to be emptied before the TSA wand-scan, and then all the devices got re-pocketed ready for the adventure.

So what were in my pockets? I had some spare duct-tape affixed to plastic (for easy removal) to do patch-taping (came in super handy), a Nexus tablet for one of the experiments (with velcro on its backside ass it needed to be velcroed to the floor), 6 AA fresh batteries (for me to putt in one of the payloads during the setup leg), two checklists (both velcroed to me), and an audio recorder (affixed to my arm with a iPod armband). Any items that did not have some sort of way to be strapped or velcroed down had to be lanyard to you (such as a camera). 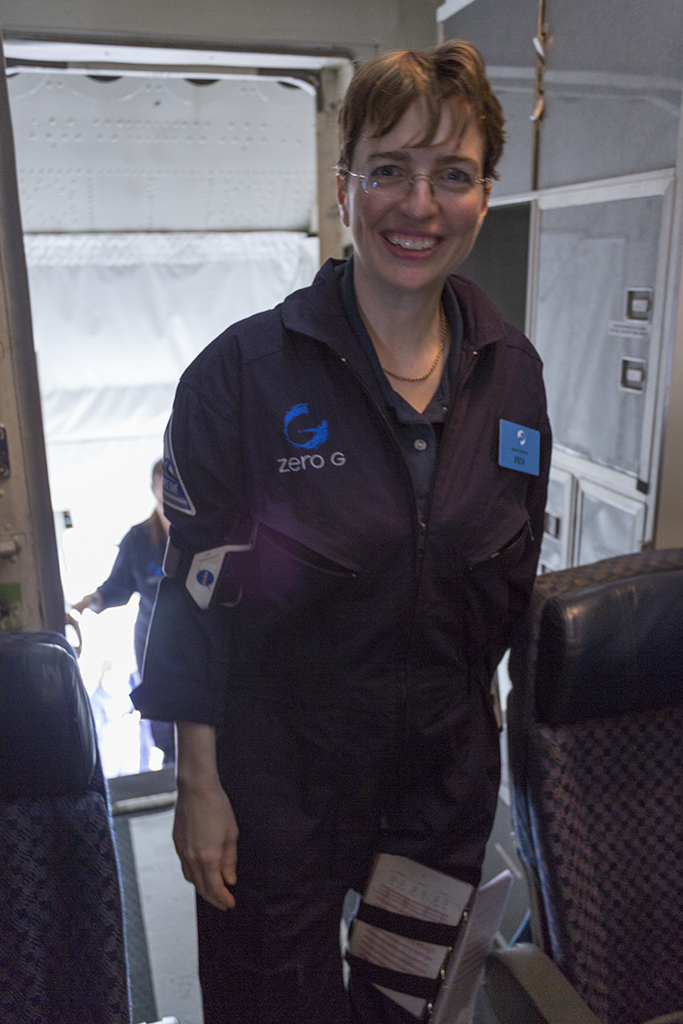 That’s me outfitted with documentation. I’m “walking documentation.” My right shoulder holds an audio recording device, my right thigh our checklists, and my left wrist (not shown) the list of tests vs. parabola. If you look closely my name badge is upside down, indicating I am a first-flyer.  (Photo by Dan Durda).

I was assigned seat 3C for takeoff (and yes, they actually gave us boarding passes!). There are a few rows of seats in the back which all fliers have to be buckled in for take up.  We boarded from the rear of the 727-200. There was an in-flight safety briefing (oxygen, life jacket, seatbelts). There is an emergency card, tailored for Zero-G, similar to what was provided for SOFIA. The plane is operated by Zero-G corporation, but registered under Amerijet. Its call sign was AJT213. The main body is empty with padded floors, walls and ceilings. There are specific areas to bolt down footstraps and equipment. For those items that cannot be bolted down, there are a series of Velcro strips we placed the day before. This turned out to be important as during the in between microgravity parabolas, you experience 1.2-2 G and holding free-floating equipment will immediate come crashing down. So this experiment which involve 5 separate free-floating equipment, having a “safe place to store.”

At approximately 9:16 am EST (local time), we taxied and the takeoff felt just like a normal plane. At about 10 minutes after takeoff, we were instructed we could begin our set-up. This set-up leg is about 15-30 minutes in length. From our practice sessions last week we knew that setting up SWUIS took about 15 minutes (with no glitches). BORE took a similar amount and they are dovetailed in such a way that we need to go in parallel but also stage certain setup first. So the checklist came in handy to remind us our “dance” for setup. We put in fresh batteries for our equipment and got it up and running in a we bit more than 15 minutes, after experiencing a momentary pause when a known interference issue might have reared its head, but it played nice that morning.  We had a pretty complex set-up, which I realized we should simplify on future flights and I made some oral notes into the audio-recorder.

We knew from the review the day before we would be experiencing 25 parabolas in total, performed in bunches of five with a flat 1-2 minutes of 1 G of “level” in between. The first “set” would be four Martian (1/3 G) and one zero-G. The second set would be one lunar (1/6 G) and 4 zero-G. And all the remaining parabolas would be zero-G. There was only one experiment on board who had requested the Martian gravity, all others needed zero-G. I gathered that the tourist flights get 15 parabolas also similarly put in 5-sets, and depending on the experiments on the flight, the number of Martian & lunar parabolas are tailored appropriately.

Besides the research teams, Zero-G assigns at least one “coach” per experiment group. He or she can help with the experiment logistics, and also provide assistance if one of the team comes down with motion sickness. To avoid motion sickness, I was strongly advised not to turn my head, or if I had to turn my head, to ensure I turned my entire upper torso and slowly, and this especially important during the high-G parts of the parabolas.

Let me divert from the experience to summarize what the plane is supposed to do to provide these “periods” of reduced gravity. This “reduced-gravity environment” is created as the plane flies on a parabolic path: the plane climbs rapidly at a 45 degree angle (“pull up”), traces a parabola (“pushover”), and then descends at a 45 degree angle (“pull out”). During the pull up and pull out segments, everything on board, then crew and experiments, experience accelerations of about 2 g (and boy did I feel this! This was actually more striking than the <1 g). During the parabola (pushover), net accelerations are supposed to drop as low as 1.5×10-2 g for about 15-20 seconds. For me, this was the largest take-away of the entire experience: those periods of zero-G went by very, very, very quickly. Also the period of 2G felt like they went by much slower, but essentially they were the of similar duration. I was very surprised, but when I decoded my voice recorder results and looked at the camera data taken by our two experiments (which were time stamps) those “pushover” events were indeed in “20 s duration time chunks.”

After  5 parabolas, the aircraft was leveled off to get us back to “old familiar” 1 G. This was a key time I learned to help re-position cables (and in many cases, people!) to get ready for the next series of five. We erred in our conops design to rotate things in threes, which did not work very well with the break after 5 parabolas. Having known now the importance of using those breaks, I would have designed the operations-experiment differently. The other science experiment was not affected by that issue.

After speaking with other folks, apparently, the “20s duration of zero-G” is driven by safety limits on the aircraft’s flight profile, to drop only a few thousand feet during the parabolas. Here’s where the suborbital rockets (one-use) and the emerging new reusable commercial suborbital platforms come in, as they promise 4-5 minutes of microgravity in a single flight. This longer duration of zero-G is highly attractive for some experiments. However, others may still want multiple zero-G test times in a short time and those are nicely provided by these aircraft doing parabolic flight profiles.

Our entire flight from nose-up to nose-down was only 2 hrs. The time between the start of parabola 1 and the end of parabola 25 was about 1 hr. It was quick.

After the flight I looked up the flight path on flightaware.com and we were doing some pretty neat aerobatics over the Gulf of Mexico. Our altitude ranged from 25,000 ft. to 20,000 ft. during the parabolic maneuvers.

My final blog summarizes my experiences of the flight and my evolving perspective on this type of platform for doing engineering, science and technology experiments.