Well,besides continuing to clean canister (with my warm oven), today we had ourfirst communications test (IT test). This test evaluates if our instrumentreceive the commands from our ground computer, and if it communicates throughthe right satellites. The procedure is very simple. The instruments are poweredup one by one and the network engineers check for the signals inside theaircraft and through the satellites. In our case, we use our ground computer tomonitor the signals by receiving something we call “engineering packet”, arecord of all the commands we send and receive from both aircraft and groundcomputers. During the test, I saw how all instruments were tuned on and workingfine, until finally our instrument was turned on but, we did not see any engineeringpacket (bummer!!!). I couldn’t help but wonder…what were wrong with ourinstrument? I felt extremely disappointed. I performed several bench tests andboth computers communicated perfectly. I also double checked that the aircraftcomputer was turned oncorrectly before performing the test, so, what went wrong? I thought a lotabout it while I was walking back from the operation center to the hangar, butthere was something else that really bothered me…I think it was the embarrassmentbecause our instrument was the only one that didn’t work…Luckily, we wereable to go to the runway and check our aircraft computer. We realized then,that the aircraft computer did not open the default program so it wasimpossible for it to communicate. Once we solved the problem and confirmed thateverything was working fine, I decided to get rid of my embarrassment by rememberingthe great words of Benjamin Franklyn: “I didn’t fail the test, I justfound 100 ways to do it wrong.” 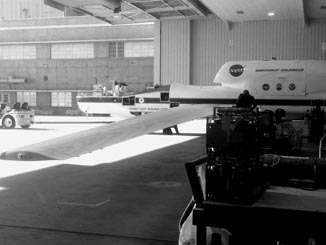 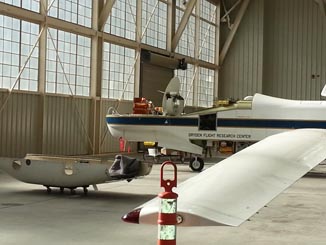 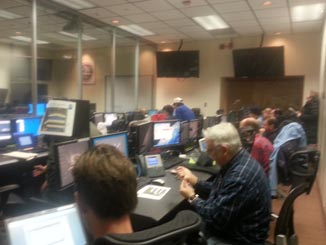 Members ofeach team in the Global Hawk Operation Center during IT test.

It is Wednesday, Jan 9th, exactly one weekworking at Dryden. The job has been going really well, but now,it is me who does not feel well.

I took some time off to recover from a terriblepoison food. Being sick during my field work has been one of my worst experiences.I honestly tried to rest on my hotel room, but subconsciously, I was stillthinking about how things were going in the hangar. Fortunately, things wererunning smoothly and my team did not need me around. I bet interesting thingshappened at Dryden, but more excited things are about to happen!

I came back to work today. I kept cleaningthe canisters (fortunately the last set), but the most interesting part of theday was our first Science meeting. Around 1: 00 pm all the scientists met withthe Principal Investigators (Eric Jensen and  Lenny Pfister)to talk about flight plans, science targets and meteorological issues.  Itseems like the flight strategies are pretty clear, and the weather seems tocooperate for the flight proposed for next week. Let’s just hope we can completeall the combine system tests on time, thus we can be ready for our first scienceflight!!!, and let me enjoy the weekend, which weather seem to be prettyawesome too!!!

Well, to be honest, today I felt like I wasin an operating room, but outside…in the waiting area. We started our morningready for a CST (combine system test), a communication test that involved thescience teams and the aircraft pilots. Unfortunately, the Ku- band system failed for almost half of the  day and we did not have any other option thanwait until it was fixed…Yes, these things happens and it is no one fault…forthis reason you should always be prepare and expect the unexpected during fieldwork.

Around 3:00 pm Ku-band became operative.However, the CST turned into a PRE-CST (the same exercise but w/o pilots) asthe pilots were not available at the moment. The bright side of this test was the successful result of ourinstrument. We were finally able to communicate through both bands KU andIridium. 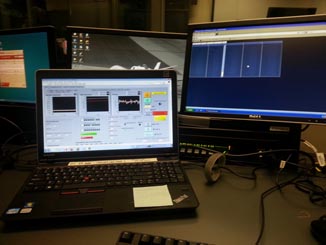 AWAS ground computer during Pre-CST (yes!!! It is working)

Day 1: Welcome to a new challenge

Welcome to my blog and to my amazing journey on ATTREX 2013.

I feel excited aboutthis new campaign, even though it happens immediately after my New Year’s partyand I haven’t had enough time to rest!

Today, I flew from Miami, FL to Los Angeles, CA on a long 5hours flight. During this time, I have not only watched movies, solvedcrosswords, and listened to some music; I also thought about my expectations forthis campaign.  As a scientist, I have aninfinite number of goals. For example, I would like to develop my research skills,and/or to improve my performance using the basic knowledge I acquired lastyear. But as a member of the ATTREX team, I only hope for the fieldwork to runsmoothly. The problem is that there are some things you simply can’t plan for during a field work, and unforeseen problemswill definitely change our mission plans. In this context, I believe that myonly option is to be optimistic and to think positive!  Since graduate school I learned that obstaclesare the stimulus that impels our actions to successfully complete our work, andI am sure that ATTREX 2013 won’t be the exception to this rule. Thus, welcometo this adventure and to the new challenge that is waiting for us. 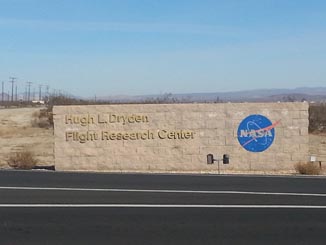 Entrance of Dryden Flight Research Center (Who saysDisneyland?… actually, it is HERE where the “magic” begins)

Today was my first day at Dryden. It was nice to come backand see all the familiar faces and wish them Happy New Year.

Our day started pretty early in the morning (around 6: 00am). I was still tired from my trip, but I like to get my hands on theaircraft, so I wouldn’t miss it for the world! Our job today was to install ourinstrument inside of the aircraft to complete the weight and balance. However,since it was the first installation for the mission, Elliot (our instrument PI)took charge. I then played the role of assistant, which it is not that bad…atleast I was still able to touch the aircraft (literally). Thus, as an assistantI was just handled the modules and the necessary tools for the AWASinstallation. The problem was that I wasn’t too familiar with the name of thetools in English (oops!). Luckily, our brilliant mechanic Steve was nearby, andhe handled most of the tools for me…Thank you Steve, you certainly avoided my awkward moment.  Despite this embarrassingmoment (that I think nobody knew until I wrote it), I still feel proud of mylabor! Today I’m not just a simple chemist; I’m a chemist who knows the name ofthe tools.  That’s the beauty of ATTREX,there is always something new to learn!! 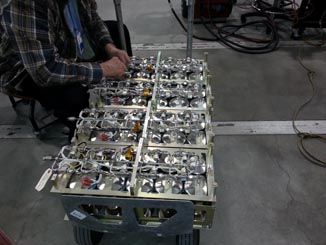 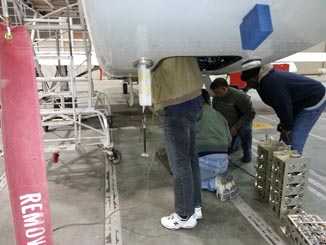 Elliot Atlas inside of the aircraft during AWAS installation

I finishedmy week and started the new one by cleaning canisters!!! This is definitely oneof the most important steps to assure the precision of our work. Thus, I haveto be really careful about the procedure and keep track of all the steps. Theprocedure is very simple, although sometimes it takes a couple of hours to bedone. Basically, I introduce the canisters inside an oven and pump out the airthat was previously setting inside them. Then, I introduce clean nitrogen andpump it out again. I repeat this process several times, so it keeps me busy formost of the day. However, one of the greatest advantages of doing this work isto be close to the oven. To be honest, the temperatures in the desert have beenextreme!!, and I think the hangar has a peculiar temperature regulator… It canonly be set to cold or “super “cold. So, if you are planning a trip to Drydenduring winter time, just be sure to bring extra coats or your own oven!!! 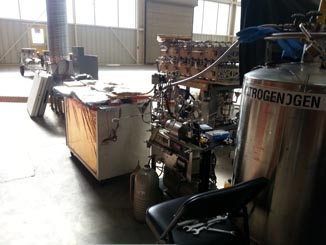 I am a postdoctoral associate from the University of Miami. During year and a half, I haveworked in the ATTREX project as a team member of the Advanced Whole Air Sampler(AWAS) for the Global Hawk aircraft. My main role is to help with the sampling, analysis, and data interpretation of tracegases collected by our instrument. My educational background includes a BS inChemistry from the Central University of Venezuela, and a PhD in EnvironmentalScience from Indiana University.  Myprevious work experience involves atmospheric chemistry research of differentlevels of the atmosphere, focusing on the analysis of particles and gases.

The purpose of my blog about ATTREX is to share myperspective about this experience, and I hope thatmy writing will be engaging for those people who might think of science assomething too abstract and complicated. Science can alsobe fun!

Check out this video if you want to know a little bit more about me.