This post was provided by Nick Heath, a student from Florida State University on the Studies of Emissions and Atmospheric Composition, Clouds and Climate Coupling by Regional Surveys (SEAC4RS) airborne science mission.

Today’s blog comes from above the clouds, high in the atmosphere in which we live…the one SEAC4RS hopes to better understand.  I’m flying home for a week.  Speaking of flying, these first 20 days also have flown by, and I can’t wait to get back to Houston for 30 more.  As a graduate student who spends most of his time reading peer-reviewed articles and writing computer code, SEAC4RS has provided me a humbling and rewarding experience thus far.  I gave my first weather briefing, led a morning pre-flight brief, and contributed as much as possible whenever I could.  SEAC4RS also has taught me the importance of urgency.  Us scientists (and humans for that matter) always like to be prepared.  We like to plan ahead.  Unfortunately, with weather forecasting, there is no planning ahead (I know that sounds contradictory!).  Things are always changing; so to provide the best forecast, you have to wait for the latest data.  This means that you are forced to procrastinate.  Then, like the people waiting for their boarding zone to be called, there is a huge “rush to the gate.”  But, I’ve found that this isn’t always a bad thing.  Sometimes urgency brings out the best in everyone.  You become much more efficient, you work as a unit, and you learn what works and what doesn’t.  Think of a wild animal out on a hunt: they wait and wait until an opportunity presents itself…they then exhaust an extreme amount of energy in a very short period…followed by relaxation and the reward of having their next meal.  Our process is not all that different…we “pounce” on the latest data, exhaust a lot of energy into our briefing, and then get to relax and let the feeling of “a job well done” soak in…very primal of us! In short, I have learned that procrastination is not always a bad thing, and may in fact be beneficial in some cases…(but not for school work, of course!).

As for the status of SEAC4RS, things are going great!  We flew into some smoke a few days ago, and then spent the all of Friday in the southeast U.S. examining chemistry, radiation, and convective clouds.  Next on the agenda is what we call a suitcase flight: the DC-8 will travel into the northwest U.S., stay the night, and fly back the next day.  This allows a lot more time to study the region.  While in the northwest, we will be studying smoke from wildfires occurring in both California and Idaho.  These fires have been a hot topic in the news lately, and SEAC4RS aims to understand their impacts on the large scale.

Lastly, as I am flying, the plane just encountered some “rough air” at 36,000 ft.  Next time you are flying, and experience turbulence, and get that strange feeling in your stomach, think of SEAC4RS.  These scientists are chasing rough air, flying around storms, putting their life in danger, for the hopes of better understanding the processes that affect our world.  Not your typical scientists, that’s for sure.

This post was provided by Nick Heath, a student from Florida State University on the Studies of Emissions and Atmospheric Composition, Clouds and Climate Coupling by Regional Surveys (SEAC4RS) airborne science mission.

The science flight on Friday, August 16th was a big success.  What’s more, a member of the met team was selected to fly at the last minute.  Lesson learned: always be prepared!  Sean Freeman, an undergraduate meteorology and computer science major at Florida State University, put his name on the list as a potential “flyer.”  Unfortunately, he found out bad news on Thursday: the manifest was full…he would not be flying on the DC-8.  Then, early Friday morning, he received a call that a spot opened up…he now was on the list!  I rushed him to Ellington, he received his safety brief, and he was off to experience airborne science first hand.

The goal of Friday’s science flight was to examine the North American Monsoon.  In general, a monsoon is a seasonal reversal of the wind pattern.  During the summer, this comes about because land (e.g., the North American continent) heats up a lot more than the surrounding waters, thus creating a large-scale temperature gradient.  Elevated terrain, such as the mountainous regions of Mexico and the western U.S., enhance this process.  The net result is a lot of thunderstorms over the continents, which transport pollution into the upper levels of the troposphere.  Once there, the pollution has the potential to impact climate on a global scale.  So, understanding this phenomenon is very important to understanding our climate.

The planes took off at ~10 AM CDT.  They headed west along the U.S./Mexico border, sampling aged outflow from thunderstorms associated with the monsoon.  They then turned northeast, and headed toward Colorado.  On their way to Colorado, they passed over the large Four Corners power plant, and were able to sample its “pollution plume.”  Once over Colorado, they encountered a smoke plume from wildfires.  The flight scientists took advantage of this situation and sampled the smoke plume.  The DC-8 flew legs through the smoke, while the ER-2 got remote sensing data from above.

Storms were beginning to pop up around Houston; so the ER-2 headed home to beat them.  The DC-8 headed home, but did some more science on its way back.  Over Texas, it descended close to the surface to sample air from a large oil field.  As the DC-8 got closer to Ellington, a large cluster of thunderstorms decided to pop up and race them home!  Met team member Sean Freeman was lucky enough to ride in the cockpit for landing, so he saw these storms up-close and personal.  A few commercial airlines even had to make emergency landings at Ellington to avoid these storms.  The DC-8 landed just before the rain and lightning reached Ellington…success (well kinda, the storm was not forecast by the met team, so no success for us!).

Below are some great images Sean provided from his trip on the DC-8.  Overall, this flight was a great success and accomplished many of the science objectives of SEAC4RS!

This post and its photo was provided by Nicholas Heath, a student from Florida State University on the Studies of Emissions and Atmospheric Composition, Clouds and Climate Coupling by Regional Surveys (SEAC4RS) airborne science mission.

My name is Nick Heath.  I am a PhD student studying meteorology at Florida State University under Dr. Henry Fuelberg.  I started surfing when I was 16, and I immediately became interested in the weather and where waves come from.  This lead me to FSU, where I received a Bachelor’s in meteorology in 2011 and, more recently, a Master’s in June 2013.  My research involves chemical transport modeling.  Specifically, I am interested in how thunderstorms transport pollution from the surface to the upper troposphere and lower stratosphere.  However, I am still a bit of a weather nerd on the side and I get to indulge in this passion here at SEAC4RS.  As a member of the meteorology team, I will get to help prepare weather briefings for each science flight.  When the planes are in flight, I sometimes will be a “nowcaster,” meaning that I will be watching radar and satellite to help keep the planes away from dangerous thunderstorms.

When I’m not doing research or forecasting, I enjoy surfing, basketball, reading, and cooking. 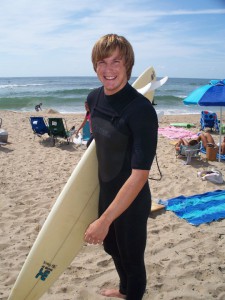