The launch countdown mission dress rehearsal for the Atlas V launch team and MMS payload test team is under way today. All countdown activities for the launch vehicle and spacecraft are being replicated during the exercise. NASA, United Launch Alliance, Goddard Space Flight Center and Southwest Research Institute are all participating in the test.

The weather forecast for Thursday is generally favorable with only a 30 per cent chance of not meeting the launch weather criteria during the 30-minute launch window due to cloud constraints.

At the conclusion of a Flight Readiness Review on Friday, March 6, NASA and United Launch Alliance (ULA) managers gave a “go” to continue preparations leading to the planned liftoff of the Magnetospheric Multiscale (MMS) spacecraft atop a ULA Atlas V rocket at 10:44 p.m. EDT on Thursday, March 12. The Mission Dress Rehearsal, during which MMS and the Atlas will be powered up, is scheduled for Monday, March 9. The final management review before flight, the Launch Readiness Review (LRR), will be conducted on Tuesday, March 10. Following the LRR, NASA Television will air the MMS Prelaunch News Conference at 1 p.m. EDT.

The mission observes reconnection directly in Earth’s protective magnetic space environment known as the magnetosphere. By studying reconnection in this local, natural laboratory, MMS helps scientists understand reconnection elsewhere, such as in the atmosphere of the sun and other stars, in the vicinity of black holes and neutron stars and at the boundary between our solar system’s heliosphere and interstellar space. 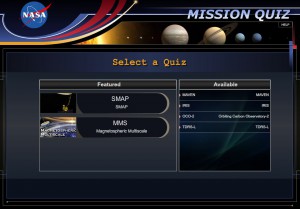 How much do you know about NASA’s upcoming Magnetospheric Multiscale mission? Take our mission quiz to find out!

Don’t worry — if you get stuck on a question, the “Research” button will help you find the information you need. Get every answer right, and you’ll have the chance to print a certificate.

Carried by a payload transporter, the MMS spacecraft departed the Astrotech payload processing facility near Kennedy Space Center at 1:30 a.m. enroute to Cape Canaveral Air Force Station. It arrived at the Vertical Integration Facility at Space Launch Complex 41 at 4:13 a.m. and the operation to hoist the spacecraft into place atop the United Launch Alliance Atlas V rocket was completed at 9:40 a.m. The mechanical and electrical connections are now being established.

The rollout of NASA’s MMS spacecraft from the Astrotech payload processing facility to Space Launch Complex 41 has been postponed 24 hours due to the weather forecast for tonight. It is rescheduled for the overnight hours of Friday morning pending the outcome of a weather briefing on Thursday afternoon. This will not affect the March 12 launch date. Meanwhile, MMS is being placed on the payload transporter today.

The United Launch Alliance Atlas V rocket that will send NASA’s Magnetospheric Multiscale spacecraft into orbit is nearly fully assembled at Cape Canaveral Air Force Station’s Space Launch Complex 41. The rocket’s first stage was installed Feb. 6 and its two solid rocket boosters were added Feb. 7 and Feb. 9. Next up was the Centaur upper stage. After its Feb. 12 arrival at the launch complex, it was lifted into place atop the first stage.

Meanwhile, the four observatories comprising the MMS spacecraft continued their prelaunch preparations at the Astrotech Payload Processing Facility. Engineers cleaned and inspected the spacecraft’s science instruments and 32 GPS antennas, and the lower two observatories were attached to the Atlas V payload adapter. The upper two observatories then were hoisted and mated to the lower stack. News media representatives had the chance to view the MMS payload in its launch configuration at Astrotech on Feb. 18.

The payload fairing that will protect MMS during launch was secured around the spacecraft yesterday in advance of the overnight journey from Astrotech to the launch complex, scheduled for Thursday morning.

The first stage of the United Launch Alliance Atlas V rocket that will launch the MMS spacecraft into orbit was hoisted into position Wednesday at Space Launch Complex 41 at Cape Canaveral Air Force Station. The Vertical Integration Facility at SLC-41 is the integration and checkout area for the Atlas V as it is built up to launch configuration. The next step in that process is the addition of a pair of solid-fueled boosters. The Centaur upper stage to go to the pad and be placed atop the first stage Feb. 11.

The four spacecraft that make up the MMS mission are in processing at the Astrotech facility near Kennedy. Thermal blanket closeouts are under way and will continue this week. Processing remains on pace for a targeted March 12 launch.

The MMS mission will study the mystery of how magnetic fields around Earth connect and disconnect, explosively releasing energy via a process known a magnetic reconnection.