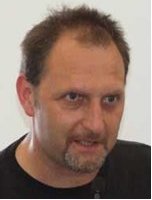 Ralf Heckel’s got an update on technical work being concluded on the German moonbuggy. His team is preparing to depart for the United States at the end of this week. Race time is nearly upon us!

Our new, self-designed differential gear finished its first long-term test. There was normal abrasion after fabrication; a surprise was the abrasion of the brass — the carbon fiber pieces scraped at the brass rings. They are smaller after the 24-hour-test (1,5/100 mm). We bonded them together with two-component glue, and now the four small pinions work perfectly without abrasion.

Our electronics department is a disaster. Our student specialist leader is ill, so all the other students must make his work too. But it works! All components are working: data-logger, radiotelemetry, short message display, sensors. Now we assemble all together in our Telebuggy computer case. Tomorrow, our students must make a difficult cable tree with lots of data lines. One is a multiple clip located between the Telebuggy computer and the Moonbuggy. Such a clip [interrupted] a space shuttle launch last year. So it must be very secure. 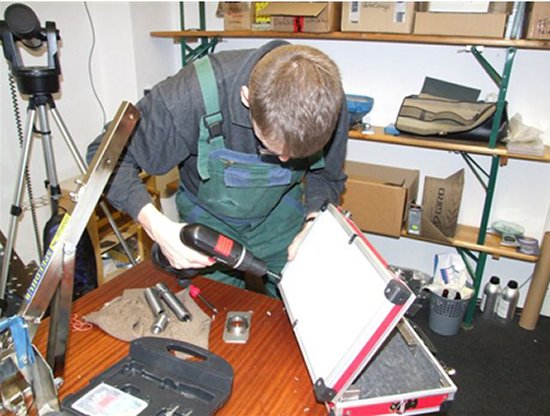 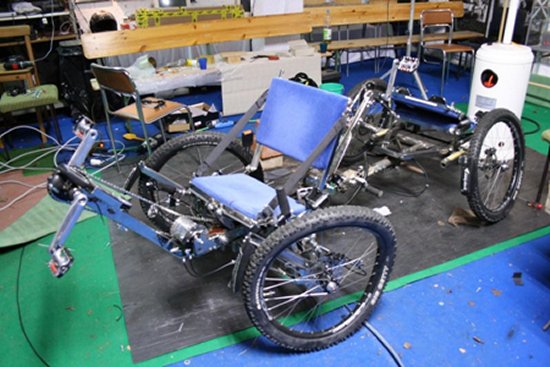 Primary work is complete on the German team’s 2009 moonbuggy.
Y’all ready for this? (Photo: R. Heckel) 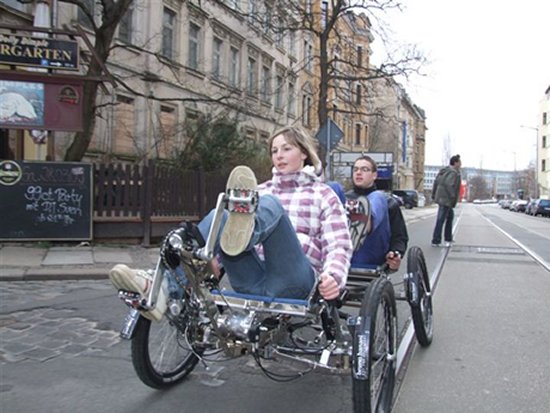 On March 24, our partner team and their professors from the Moscow Aviation Institute visited us. All liked to ride the moonbuggy. All want to be a part of our Russian team for 2010. The summer school for this team starts in summer 2009 in Leipzig. Also, we got an invitation to visit “the Krim” (Crimea) on the Black Sea. There is an international aerospace conference there for students — we should present the moonbuggy there. Near this place, former Russian rocket chief designer Sergei Korolyov tested his first self-constructed plane.

Heckel and the moonbuggy team also visited recently with Germany’s next generation of Olympic hopefuls at the “High School for Sports” in Leipzig. Check it out at http://www.sportgymnasium-leipzig.de/.

This is Germany’s “elite school of sports” — the most successful school for training of the national Olympics teams’ future generations.

Students of athletics and bicycle sports were testing the moonbuggy. This was a complete new experience for all — it was fun and was the ignition for a lot of discussions. The event was organized by the science advisor at the school and by the German Space Education Institute. 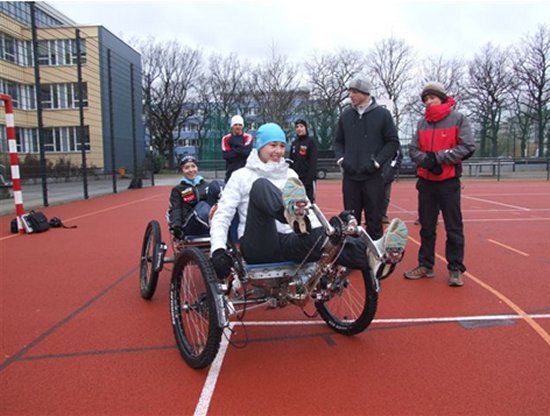 The science results of the moonbuggy team are an inspiration for the sport students. Now they are ambassadors for the moonbuggy spirit at the next Olympic games.

Glad to see Germany’s moonbuggy team making such an international impact, and we look forward to the Russian team’s entry in 2010! Certainly, the Germans are putting together a formidable entry in pursuit of this year’s new “Best International Team Race Time” award, one of numerous prizes NASA and its corporate sponsors will present to participants in the 2009 Great Moonbuggy Race.

Will YOUR team take home a prize? We’ll find out in a few short days!