Last week was a particularly exciting one for the moonbuggy team. Curtis Parks, our project manager, got a call from Hilary Bird, a friend of a friend of one of our team members — who turned out to be a journalism student doing a week-long work placement with Ottawa’s CTV news channel. Hilary had been invited to our comedy night — which was a big hit, lots of fun and raised more than $700! — and though she couldn’t attend, she thought our team would make a really great news story!

So last Thursday afternoon, Hilary and a CTV cameraman came over to Carleton to get some footage and interviews. Curtis, Chris Polowick and I were interviewed and they got lots of footage of us working on the buggy, rolling it around and building parts in the machine shop.

It was all very exciting — but as soon as it was over, we had to start getting things organized for the next day when the Discovery Channel would be sending over a film crew to spend the entire day with us!

Bright and early Friday morning, the Discovery film crew rolled in and started filming us working on the buggy. The first thing they did was hook Curtis up to a hidden microphone so they’d be able to follow all the action over the course of the day. At that point, the buggy had everything on except one set of pedals and the seats, which the film crew was hoping to film being made — it’s an exciting vacuum-forming process done by Industrial Design team member Andrew Lowe. [Note: Lindsay’s brief Q&A with Andrew appears below.]

We took the buggy for a little spin from our team room down to the machine shop, with the film crew running behind, then set to work for the rest of the day. Everything seemed to be a little bit more exciting and intense with the film crew hovering around. They were in on all the action and would stop us every once in a while to capture our work and explanations of what we were doing. After lunch, Curtis and I were taken aside for extensive individual interviews with one of the producers to give a more detailed explanation of exactly what we were doing this year, how it was different from last year, some experiences we’ve had and what we hope to achieve. 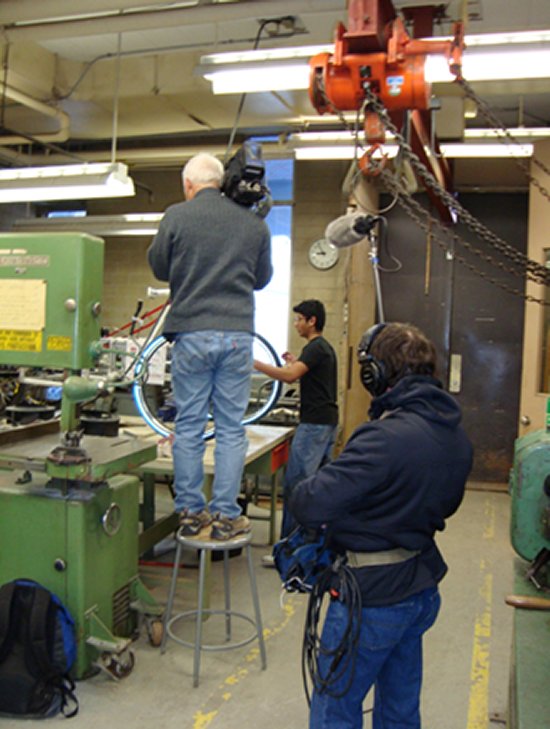 After an exhausting but exciting day, we finally got the buggy back to the team room and were just sitting down to figure out what needed to be done next… when we realized it was 5:50 p.m. and our CTV news story was being aired in 10 minutes on the 6 o’clock news! We ran down to the university pub, and got there just in time to watch ourselves on TV. Our story also was put on the Internet newscast and was seen across the country all weekend. Talk about awesome publicity!

We also finally selected our moonbuggy riders for this year’s race. Taking advantage of the machine shop’s lunch break, tryouts were held Tuesday at noon in our athletic center. We decided on a recumbent bicycle tryout to simulate our buggy’s riding position — turns out riding a recumbent bike is a lot harder than it looks! Though there were no other girls and therefore no need for me to try out, I decided to do it anyway, to see how I ranked with the guys. It ended up being a tie for first place between me and Chris Polowick, who will be our male rider. Time to start the serious training now!

How did you get involved in the Moonbuggy Project?
I got involved in the project after Curtis and Brian [Mattock, Curtis’ fellow project manager] appealed to us designers to help them build a better buggy. The project looked interesting, and I love working with my hands, building things. The ability to apply design principles to the project, and being able to manufacture major parts of the buggy, is what sold me.

What are your contributions as the token Industrial Design student on the team?
I’ve been dealing with the human factors of the moonbuggy. It seemed to me that previous Carleton moonbuggies had been well engineered, but rider, pedal and seating positions had been left as an afterthought. Research into recumbent bicycles and cycling ergonomics led to the initial positioning of the pedals and seat in relation to the riders.

Speaking of seats, they have been my main contribution to the project. The seats were designed through a series of development sketches and then refined and modeled in SolidWorks 2008. They are made of a folding aluminum frame with vacuum-formed ABS plastic bottom and back panels. After a few tweaks, the seats are quite comfortable and definitely spice up the look of our moonbuggy. 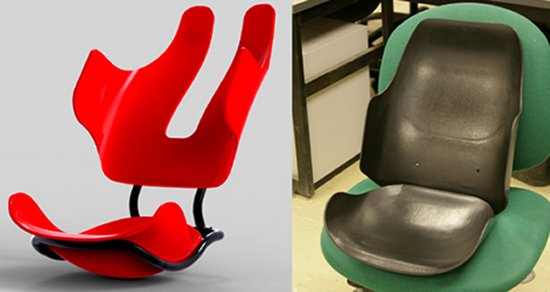 What have you enjoyed most about the experience?
I’ve enjoyed working with all the engineers involved in the project. I normally work with other designers, and its been nice to work with some more technically minded people. I’m looking forward to representing Carleton’s School of Industrial Design, as well as being one of the few industrial designers at NASA’s Great Moonbuggy Race. 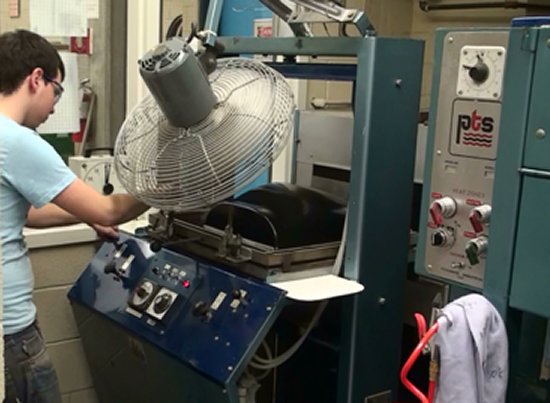 Andrew conducts the vacuum-forming process. To get a look at more of his design
work, visit http://www.lowe9.com. (Photo: Carleton University)

2 thoughts on “Team Carleton: A Day of Discovery and a Final Week of Prep”