We’re on the course today — NASA’s 16th annual Great Moonbuggy Race is finally upon us! Here’s more pre-race highlights from Anne Geyer and Team Germany. If you’re not yet signed up for real-time race results via Twitter, get on the stick! Visit http://www.twitter.com and click “Follow” on MOONBUGGYRACE to get the latest GMBR news!

And again the alarm clock rings earlier as I thought. Like yesterday I get up by 6:45 o’clock and disappear under the shower. After breakfast we should start immediately; however, unexpected problems delay the departure. The e-mail server refuses service. So we have to find another more elegant solution to avoid this problem and maintain correspondence with the home and our American friends.

There is also pleasant news. We made it onto the first page of The Huntsville Times! The interest which we have released with the media is huge. It would be nice to see the results of the camera shots. But unfortunately the broadcasting time is unknown to us.

By 9 o’clock it is done, so we can start. Before going to the HCT, we insert another short stop to meet one of the Indian teams. They arrived yesterday and are still correspondingly tired. Their moonbuggy is still on the way by ship to America. I can understand that they become slightly nervous. I would be restless too if I did not know that every part is here and that the moonbuggy works right. At the moment we cannot do anything for them, but we offer them our help if it should be needed.

At the Huntsville Center for Technology, we head immediately for our garage and make the buggy ready to go. Also today the television enrolls itself. A reporter interviews and films me. I get a microphone so that I can declare the moonbuggy and talk about our team, the journey and the SEI. Although this is not my first interview, I am a little nervous. And sometimes it is not very easy to get particularly the correct English words. And so I am happy when I can give him the microphone back! 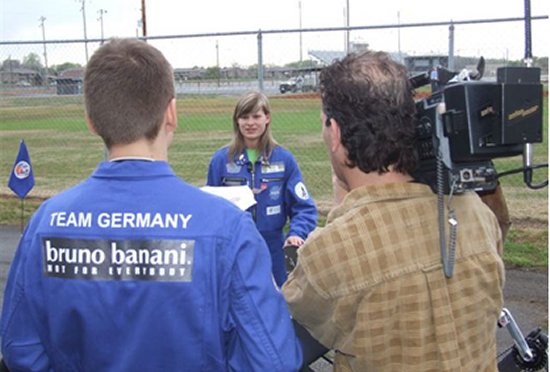 The teams of HCT and Madison High School train already and want to compare their times with ours. Under competition conditions, we practice folding out the moonbuggy [for the timed assembly]. In this case we are, at 9 seconds, not far away from the best time of 6 seconds. However, we agreed to ourselves that with some more practice we can even be better.

Then the buggy goes onto the test track. Two rounds [matching the length and conditions] of the race are to be driven. However according to the first round we interrupt because it begins to rain. Unfortunately the times are not comparable because of this. Our best 3 minutes 54 seconds, which is in fact very fast. All buggies have gone back into the garages a second test run is scheduled for after lunch.

The test run showed one problem clearly. The rear-wheel brake is too heavy for Lisa to move. And so we begin to search for possible solutions. We decide on extending the brake arm for better leverage. It is our hope to find the suitable tools and materials here. When we explain the problem to Dmitri, the Russian driver of the HCT team, he says there should not be any problem. Christian and I also talk to Mr. White and the teacher for welding and they agree to help. After we find a suitable piece of aluminum and saw it, we weld.

In the spare time between, we talk us with Dmitri and the boys that work in the workshop. Jokes are done and we exchange interests. It is amazing already that we get on so well in spite of the differences.

After the welding and cooling down, we slur some corners and edges in order to avoid injuries. Then we test the result. The adjustment of the brakes requires a sensitiveness, so it takes a while until both back wheels stop again simultaneously. But nevertheless a test on the street is indispensable.

Christian and I accelerate the moonbuggy to full speed and try an emergency stop. We repeat the whole procedure a number of times — however, the result remains the same: The buggy moves to the left while braking. Back to the garage to change the attitudes correspondingly, then a further test, and everything is right. 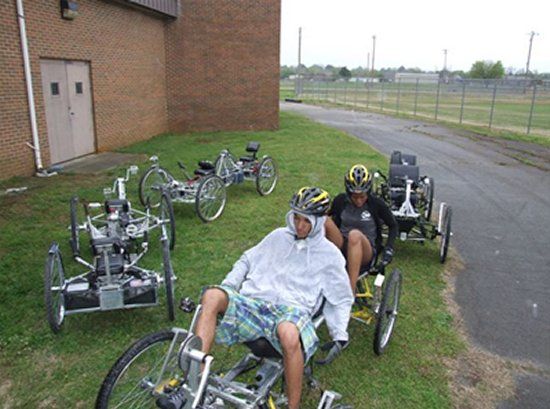 Huntsville Center for Technology team members endure the rain to test their
2009 moonbuggies; they still make use of their 2008 models as well. (Photo: R. Heckel)

Back again in the garage we are called to go for lunch. Fortunately we have been invited for lunch with the local team. There is a tasty chili con carne and brownies. The secretary of the manager has cooked a giant pot of chili. The mood is loose. All are glad to sit on a dry place and to be able to relax a few minutes.

However, when the buggies are barely back on the course, it starts again to drizzle. Lisa and Thommy drive, and in the end both descend quite soaked and with bright red faces. However, their time was substantial — 4 minutes 9 seconds for two rounds. The best team reaches 4 minutes 1 second with a month of training. That’s not bad. Quite satisfied we decided to leave it at this attempt, also because of the hard rain. Lisa and Thommy put on dry clothes and have some time to recover.

Christian and I conclude to watch the other teams keep training. And when the rain stops we exchanged moonbuggies. We drive the buggy of the HCT and they get ours. The small round on the court suffices and clarifies the differences of the driving behavior. The guidance and steering are different and the higher sitting position leads to a completely different feeling while driving.

Now the load test approaches! Can our buggy move a two-ton truck? First, Ralf fixes the moonbuggy to the vehicle with a rope. I switch into the first gear. Feet on the pedals. Christian gives the signal. Three, two, one — and GO! The tires spin a little but then they grip. Slowly we move ourselves. No problems.

To sum it up: we do not need any breakdown service, we have a moonbuggy! 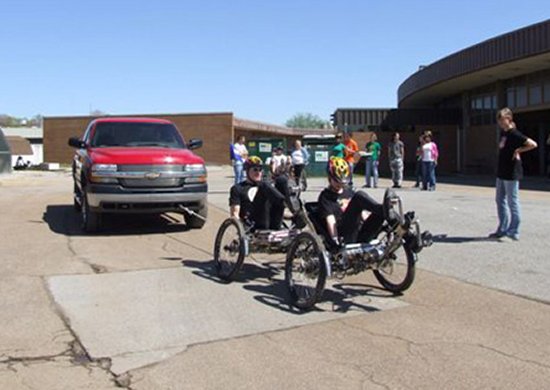 Fun with moonbuggies: German team members test their buggy’s load endurance
(and their own) by pulling a two-ton Chevy pickup around the parking lot
at Huntsville Center for Technology. (Photo: R. Heckel) 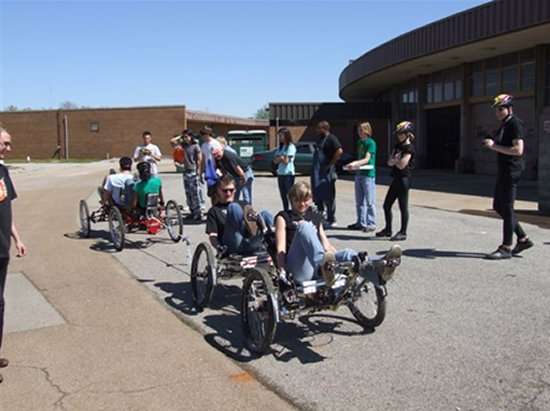 More fun with moonbuggies: Bug-of-war! The German team and their hosts from HCT
duke it out, GMBR-style. (Photo: R. Heckel) 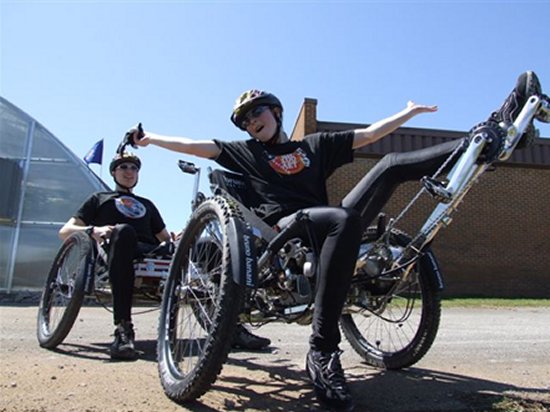 Many thanks to Anne, Thommy, Ralf and the whole German team — see you race-side!