On Feb. 17 NASA announced the roster of teams set to compete April 1-2 at the 18th annual NASA Great Moonbuggy Race — and the race season is officially under way! 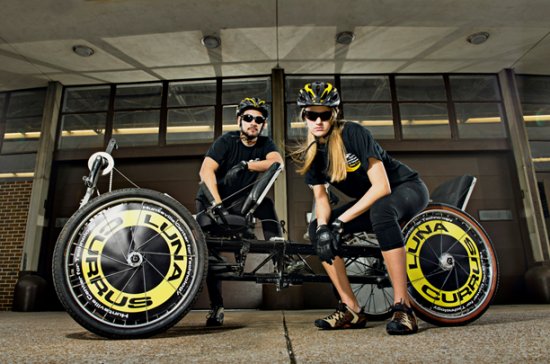 Ezra Logreira, left, and Karine Wittenborg, moonbuggy racers from the Huntsville
Center for Technology, are geared up for this year’s Great Moonbuggy Race.
(MSFC/David Higginbotham)

A total of 84 student teams have registered to roll out their wheeled wonders at the U.S. Space & Rocket Center in Huntsville, Ala. They include U.S. high school, college and university students from 22 states and Puerto Rico; and international challengers from six countries, including — for the first time — racers from Ethiopia, Pakistan and Russia. For the complete list of 2011 teams, visit http://moonbuggy.msfc.nasa.gov.

Every year, the NASA Great Moonbuggy Race challenges students to design, build and race lightweight, human-powered rovers — tackling some of the same engineering challenges overcome by Apollo-era lunar rover developers at the Marshall Center in the late 1960s.

“This project engages the aerospace talent of tomorrow in hands-on engineering,” said Dr. Frank Six, Marshall’s university affairs officer and one of the race founders. “They learn by doing.”

This year’s race has a special historic impact — 40 years ago, the first NASA Lunar Roving Vehicle was used on the surface of the moon. NASA’s historic lunar rover made its inaugural excursion July 31, 1971, driven by Apollo 15 astronauts David Scott and James Irwin. Two more rovers followed in 1972, during the Apollo 16 and Apollo 17 missions.

Four decades later, moonbuggy racers strive to uphold the legacy of that engineering feat. Their challenge is to deliver a two-driver vehicle capable of posting the fastest vehicle assembly and race times, while incurring the fewest penalties on a course that simulates the harsh lunar surface. High school students square off in one division; college and university teams compete in another.

Race organizers expect another heated contest this year. But Six said he also looks forward to that special “moonbuggy camaraderie” on and off the course — a hallmark of the event which transcends region, ethnicity and even language barriers.

“Students hailing from four continents come together in friendly competition,” he said. “More importantly, they come to meet one another, to compare ideas and turn shared dreams of spaceflight into lasting friendships and future partnerships.”

NASA will broadcast live race coverage via NASA TV and the online Webcasting service UStream. In 2010, more than 32,000 people around the world watched live coverage, including commentary from race organizers and chats with student racers.