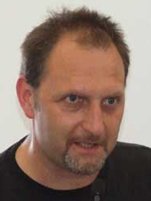 One of the most familiar faces at the Great Moonbuggy Race in recent years is that of Ralf Heckel, the team advisor for the student racers from the German Space Education Institute in Leipzig. For the past three years, Ralf and his wife Yvonne have led their team across the pond with so much energy and enthusiasm even competitors end up rooting for them! Here, Ralf describes where that energy comes from. His English isn’t flawless — but see if you don’t get the same thrill we do from Ralf’s indomitable spirit.

It is not longer a race — it is a journey, side by side. Nothing is science fiction. We are living in the future and this is great.

NASA’s annual Great Moonbuggy Race is not a game — it is hard reality. You must make a hard and good job to reach an award. But this award you will have lifelong, and it is a step into all our futures.

The last two weeks were holidays in Germany. Our students use all this time for their Moonbuggy. We are competitors three years now. In 2007, our first year, we made a very good job — in six weeks from a white paper to a Moonbuggy. The results were grand: Rookie Award and Best Design Award.

Some parents and teachers don’t understand the core values of the contest. They said: “What, for a curious soapbox-race?” It is really not easy to earn respect in the car nation of Germany! Now, Prof. Natalya Korolev, the daughter of Sputnik designer Sergei Korolev, is supporting the international idea of the Moonbuggy Race. She was in Huntsville 2008. We traveled three times to the USA and three times to Russia last year — all for this international idea!

2009 is the last year for our German Moonbuggy in steel. The future is composite, starting in 2010. For this material you need lots of science data. So our Moonbuggy Team has two new sections: electronic and software. In 2008, we had a telemetry system to see the tracking of our moonbuggy on the course. Now [our self-written] software analysis program can show you the exact speed, acceleration and forces. With a, onboard video camera, our pilots can see their mistakes.

Last week Thommy and Sasha finished the changes to the chassis. They used Corel Draw and Solid Works for CAD. Thommy use the calculations for the moonbuggy transmission for his final secondary-school examinations this year. They were in a factory to finish their work — welding, drilling, bending.

Christian finished his differential gear on the computer. It is a high-tech construction, with 92 different parts to use for two drivers. The lathe operator [first] saw the outlines and said: “Not possible.” Today he tested the first set of parts and said, “Excellent work!” Christian has a big future as a CAD designer.

The 2008 German team can be seen here. We’ll add more pictures of the 2009 team in action later this week, and Ralf will be back soon with more updates on their progress toward race day.

To download more pictures of the German team on tour across Europe and in action on the course, download this Zip file. If you’d like to contact Ralf to talk moonbuggy tech, drop him a line at ralf.heckel@spacepass.de.

Lindsay Los, 21, is a third-year mechanical engineering student at Carleton University in Ottawa, Ontario. Last year, as Carleton’s female moonbuggy driver, she helped push her team to third place in the college division. She’s driving again this year, and she aims to win.

It’s Carleton’s “Reading Week” this week — a break in the school routine for some “frantic catching up,” Lindsay says, prior to mid-terms — but she also found time to write about her team for the Buggy Blog:

Optimism, dedication, enthusiasm, and great spirit — these are just a few of the words Professor Kaya, our faculty supervisor, used to describe our team’s attitude over the past six months — especially given the fact that we haven’t had a lot of financial support from the university. Our team did not let any bumps in the road stop them, however, and with less than 50 days left till race day, we are well on our way to completing the buggy that we hope will help us defend our bronze medal!

After four months of designing the buggy, we finally completed a working design we were happy with. Now it was off to the Carleton Machine Shop to get the action started! 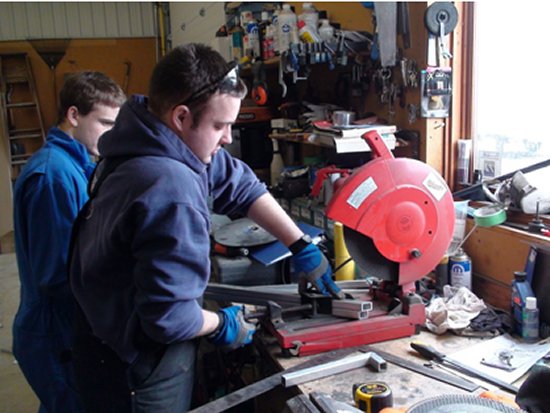 Carleton team members Curtis Parks, front, and Chris Polliwick use a circular saw
in the school’s  machine shop to cut aluminum for their buggy.

Because our team is competing for shop time with multiple other engineering projects, we decided to speed up the building process by taking matters into our own hands. Fortunately our project manager Curtis Parks’ family has a fully equipped machine shop at their house, just waiting for our moonbuggy! 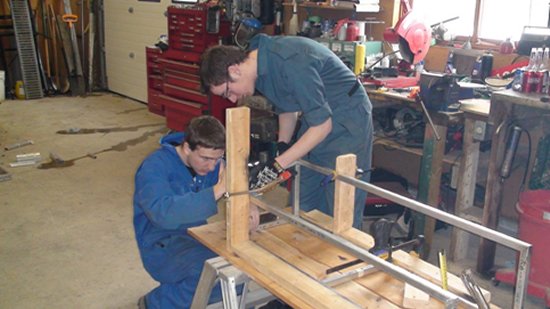 We loaded up all the cut aluminum and drove four hours to Peterborough, Ontario, where our personal machine shop was waiting. Twenty hours of welding, three sunburns and one hot tub party later, we had two completed moonbuggy frames. (As it turned out, the sunburns may have been a positive thing — and may even have gotten Curtis an awesome summer job!  When asked about his incredibly red and slightly puffy eyes in a job interview several days later, Curtis was able to launch into an exciting spiel about the moonbuggy, the hands-on engineering experience he was getting and how amazingly applicable it would be in an engineering workplace. I’d definitely hire him!)

Lindsay conducted a quick interview with Curtis, also a third-year mechanical engineering student, during their work in the machine shop. Some excerpts:

L: How did you get involved in “MB03,” our Moonbuggy project?
C: Last year’s moonbuggy project needed some help in the machine shop, and I was asked since I already had some experience. Then I started to get more involved with the design, because I found it really interesting. 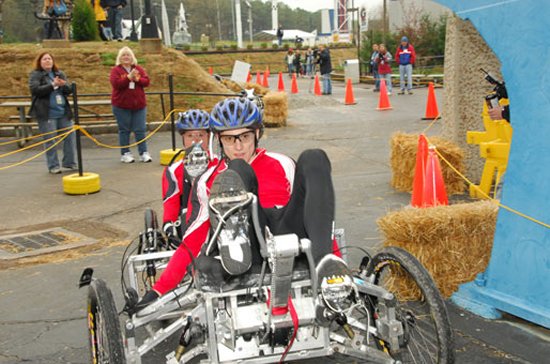 The 2008 Carleton team pedals its way to third place in the 15th annual
Great Moonbuggy Race.

L: What’s your favorite thing about being involved in MB03?
C: The competition. Driving down to Alabama last year and being at the competition was such a cool experience — especially things like talking to the NASA engineers who worked on the original projects, and meeting other teams from around the world. Also, being project manager this year has been really interesting and fun.

We’ll check in with Lindsay and Team Carleton again soon — once mid-terms are behind them!

Greetings from Huntsville, Ala., the race capital of the world — if you’re driving a sweet, tricked-out moonbuggy, that is. 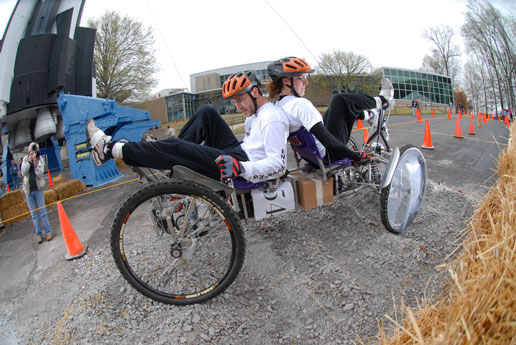 Student racers from the University of Evansville in Evansville, Ind., speed to
victory in the college division of NASA’s 15th annual Great Moonbuggy Race in
April 2008. (NASA/MSFC/Emmett Given)

NASA and more than 500 students from high schools, home schools, colleges, vocational schools and universities around the world are gearing up for the 16th annual NASA Great Moonbuggy Race, to be held here at the U.S. Space & Rocket Center April 3-4.

If you know about the Great Moonbuggy Race, you know it’s a big cornerstone of our education outreach here at NASA’s Marshall Space Flight Center, which organizes the event each year. It’s also the culmination of a lot of work on the part of dozens of race teams, made up of bright, energetic young people from all over America and as far away as Puerto Rico, Canada, Germany, India, Mexico and Romania.

If you don’t already know everything there is to know about the moonbuggy race, do yourself a favor and check it out — it’s the most fun you can have on four wheels.

As I write this, 88 teams have registered for this year’s contest. Some have spent weeks or months designing their moonbuggies — lightweight, two-person racers based on the design of the original NASA lunar rovers used in the early 1970s during the Apollo missions. Now the teams are assembling their buggies, field-testing them and preparing themselves — because those who’ve been here before know the simulated lunar race course here in Huntsville is not for the faint of heart. Or the weak of soldered joint.

A number of this year’s racers have agreed to check in with us in the weeks leading up to the race. They’ll write about the engineering hurdles they’re overcoming, insider tips on conquering the grueling otherworldly track, and their various moonbuggy-related adventures between now and race day.

And on April 3-4, we’ll talk live with the racers, post their race reactions — and even provide up-to-the-minute race results via Twitter. So stay tuned, and let’s race!