With less than two weeks to go until the start of the 18th annual NASA Great Moonbuggy Race, we’re discussing the engineering marvel that is the moonbuggy itself. A direct descendant of the original Lunar Roving Vehicle, racers’ moonbuggies are built to take the worst our course has to offer.

Well… they’re supposed to be built that way. =) 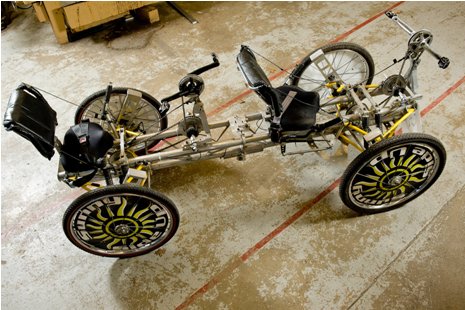 Experienced teams such as the Huntsville Center for Technology have
refined their designs based on practical course experience. New teams don’t yet
know what’s waiting for them… (MSFC/David Higginbotham) 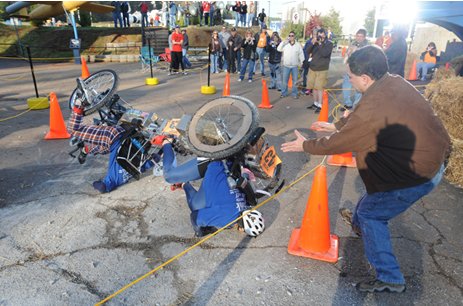 The Suspension is Killing Me

Once you’ve got your buggy’s chassis figured out, you’ve got to start thinking about protecting your own “chassis” — with a good suspension system designed to take the punishment of the course so racers’ backsides don’t have to.

The suspension is the catch-all term for the simple or complex network of springs, shock absorbers and linkages used to connect a vehicle to its wheels. They contribute to good handling and braking and protect the vehicle’s riders from jarring changes in the driving surface. Most standard suspension systems for moonbuggies employ passive springs to absorb impact and shocks to control spring motion.

Do you go with a standard beam suspension — a simple cart axle that keeps each pair of wheels parallel and perpendicular to the axle — or splurge and design an independent suspension system, giving each wheels a certain amount of self-governing rise and fall?

“Some buggies show up with no suspension at all,” says race authority Dennis Gallagher (he’s also a world-class astrophysicist, no matter what he looks like in that shady race-day hat of his). “I’m not sure why they’d make that particular choice. I guess they’re interested in reliving the bone-crushing antique wagon or automobile experience circa 1905?”

Gallagher heartily recommends a sturdy independent suspension to brace drivers against the decidedly uneven terrain they’ll face on the course. “Obstacles are definitely NOT uniform,” he cautions. “Every wheel takes punishment individually, so you’re going to get thrown to one side or the other.”

Believe it. One late-race obstacle in particular causes all four wheels to seesaw violently, and separately, in truly queasy-fying fashion. If your vehicle has held up to that point, over some higher and steeper obstacles, you should be fine… but it has been known to deliver the coup de grace to wounded buggies, and taken the last ounce of strength out of already exhausted racers. 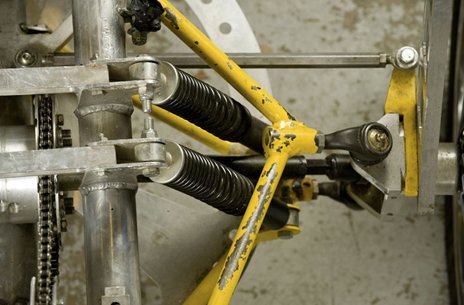 The strut for this wheel/axle mounting incorporates a lot of buggy
business,including suspension springs, steering and drive chain. HCT
knows how to build a better mousetrap! (MSFC/David Higginbotham)

Go for the suspension, Gallagher urges — leave the butt-pummeling Americana to people peddling around flat tracks at classic-car shows.

Any typical off-road vehicle suspension system will provide a good jumping-off point. “If you’ve seen it on a dirt bike or an ATV, chances are you’ll see it on a moonbuggy,” he says.

The best suspension systems maintain a relatively even keel, keeping the frame fairly level, keeping most of the punishing action away from the buggy operators. Let the wheels bounce around all they want, Gallagher says — the real challenge is to absorb the punishing shock of travel without losing control of the machine. “Springs work both ways,” he says. “They load and they unload. So if you hit an obstacle, you’re going to be thrown up and off.”

He ponders the likelihood of that, ruminating on the possible buggy configurations heading his way April 1. “Please,” he chuckles, “wear your seatbelts!”

No Dissembling: Everything Can Hinge on Your Folding Mechanism

Nobody wins this race based on course speed alone. Every team kicks off their run by demonstrating how quickly they can fold out, pop up or otherwise reconfigure their collapsed moonbuggy.

This is an historic aspect of the challenge, based on the need to fit the original Lunar Roving Vehicles in a cramped, 4-by-4-by-4 cube aboard the Lunar Excursion Module. That was all the room Apollo-era engineers could afford to devote to the rover, and the unfolded vehicle worked perfectly the very first time for Apollo 15 astronauts David Scott and James Irwin

It’s too simple to call it a “folding mechanism,” of course, but whether you use hinges; separate hardware elements and a handy batch of cotter pins; or a more elaborate pump system to collapse and then pop your buggy back into ready position, this is a unique and often perplexing moonbuggy element.

“It’s contrary to the logic of the design requirements to have a frame that can fold,” Gallagher says. “But it’s all part of the magic of this race, just as it was part of the historic original design.” 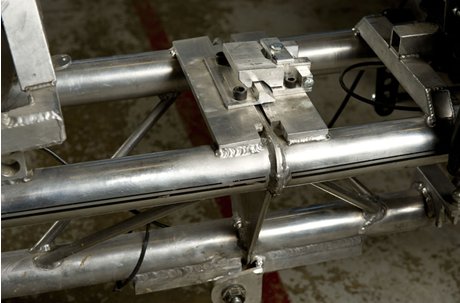 The folding mechanism for HCT’s tri-tube truss configuration. Note thelatching mechanism, and particularly the hinge placement. It’s on thebottom — better ensuring it stays closed when it meets the punishingforces of the course. (MSFC/David Higginbotham)

Tom Hancock, the Huntsville-based chair of the Alabama/Mississippi section of the American Institute of Aeronautics and Astronautics and a longtime member of the Great Moonbuggy Race planning committee, says there’s been no end to the innovative folding concepts teams have come up with for the last 17 races. They don’t all fold. Some are hinged; some have a pivoting chassis frame. Some come accordion-style, with sliding sections and cotter pins to lock them down. Some get laid out in pieces, to be quickly transformed by hand when the clock starts — robo-mobiles in disguise, some held together with a mismatched assemblage of bolts and the raw will of the team.

Hancock is always amused to hear modern buggy teams contemplating how to shave tenths of a second off their two-second assembly time. (That’s right — some teams can configure their whole rig in just one-Mississippi-two-Mississippi.)

“Two seconds!” Hancock laughs. “Back in 1994-1995, assembly times could be 20 minutes.” He recalls an early Georgia Tech team sweating as the clock ticked, while they actually did an on-the-spot arc-welding job at the assembly line.

“We were all just watching the timer,” he says, “shaking our heads and repeating, ‘Do NOT look at the arc-welding light!'”

However fanciful or practical your plan for collapsing and reassembling the buggy, Gallagher points to the same, simple bottom line. “Just be sure the machine has sufficient strength to put up with the stresses caused by those hinge or fold points once the buggy is assembled or unfolded,” he says.

He reiterates his earlier caution about chassis work here. “Know the strength of materials, the thickness strength of welds, and what kind of loads you’re going to put on those hinges or joints,” he says. “KNOW whether or not your bolts will shear off under stress. Know it before you get to the starting line.”

He’s excited by the race; Hancock is too. They both dig the rush of pure, youthful adrenaline it sparks in almost every racer, but more important, they say, is the professional experience students are gaining, the practical value that lasts long after the adrenaline has faded.

“They don’t have that experience yet, for the most part,” Gallagher says. “Most won’t have computer modeling experience yet, or a background in stress analysis, or a thorough, professional understanding of how a certain tension steel will behave in a particular application.

“What the race experience gains them is a clearer understanding of the way engineers work,” he adds.

Which isn’t to say it’s a clinical or dispassionate profession. Just like the engineers tapped to defy the odds and deliver the original Lunar Roving Vehicle in a mere 17 months between 1969-1971, today’s moonbuggy racers come to recognize that a professional engineering challenge is PURE passion.

“I have yet to see a team come in here and get trashed by the course who didn’t get fired up to come back and tackle it a second time,” Gallagher says.