Just when Mike Selby thought he was out, they pulled him back in! Mike, a Marshall Space Flight Center avionics engineer and head scorekeeper for NASA’s Great Moonbuggy Race, recalls his days as a moonbuggy racer at the University of Alabama in Huntsville (UAH):

I was part of the UAH team in 1995 and 1996, during my last two years as an engineering undergraduate. When the race started in 1994, it was held in the summer, and it had been primarily an engineering design activity for seniors. So in 1995 we had lost all our institutional moonbuggy knowledge — all the previous year’s participants had graduated!

I was a junior in 1995, when the race moved to the late April/early May timeframe. We were still racing on the original course here on Redstone Arsenal, on the very site where NASA tested the original lunar rovers in the 1960s. We finished in second place that year. 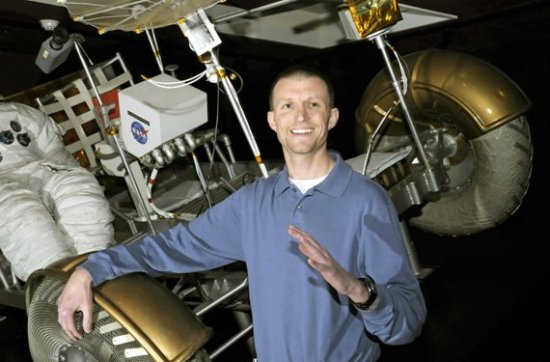 In 1996, I was completing a very tough senior design project and I had a serious case of senioritis, so I really pulled back, tried to minimize my involvement. Then, the last week of classes, literally on Thursday night before the moonbuggy race on Saturday, my engineering classmates and I had a pizza party, and I took leftover pizza out to the team, which was still working on the moonbuggy. I think I got there at around 8:30 p.m. — and I ended up staying to work on the moonbuggy until 3 a.m., then went back first thing the next morning and we worked around the clock, trying to get it ready for the race on Saturday. We didn’t think we were going to make it.

It was the first year NASA had held the race at the U.S. Space & Rocket Center. On Saturday morning, the day the colleges and universities raced, there was a tornado warning that delayed the start. Everyone had to go inside, stay in the tornado shelter until they sounded the all-clear. If it weren’t for that delay, we never would have made it to the starting line in time!

As it turned out, we came in first place that year. But I don’t recommend waiting til the last minute like we did — boy, were we flying by the seat of our pants in those early years!

Mike graduated from UAH, and he joined the Marshall Center’s workforce that same summer. He became a moonbuggy race volunteer in 1997, and took on the head scorekeeper job in 2001. He’s been monitoring racers’ times ever since. Why?

I like the idea of helping to recruit bright, new minds to come work at NASA. I think the race is incredibly inspirational in that way. Whatever you choose to do with the experience beyond high school and college, it’s a great opportunity, and great fun. It keeps me young.