So we’ve rolled out our brand new video player– Flash, no multiple formats, only one plug-in required for most browsers, interface and controls that have been made de facto standards by a certain popular video site – and we’ve rolled right into the latest technology firefight, encapsulated by this comment from a discerning NASA.gov user:

“Why are you wasting time on Flash? HTML5 is the coming thing and makes any plug-in unnecessary. Plus your Flash player won’t work on my iPhone or iPad.” – Steve Jobs

No, not really. But it’s a valid thought, and the response has to do with how we work around here, sometimes by choice, but most times by necessity.

We’ve been working on the Flash video system for some time, because we’re as tired as everyone else of dealing with multiple formats to cover all major platforms. As YouTube has demonstrated, Flash is a great format for getting video across platforms with a minimum of hassle for the user.

I realize no one wants to hear about limited staff or budgets, but the reality of our world is that our staffing at NASA HQ (3 editors and 3 multimedia developers) and rigid budget always puts development on the back burner relative to daily operations. Between shuttle missions, high-profile anniversaries and fundamental shifts in U.S. national space policy, we haven’t had a lot of time recently to work on new things.

And as we just as we shift to Flash, the technology is already moving beyond it. That’s not surprising. In fact, I’d argue that’s exactly the way it should be. As a government web site, we spend taxpayer dollars. The best use of that money is to spend it on making our content available to the widest number of people, and that means developing to more widespread – i.e., older — technology.

The biggest problem with HTML5 is that it’s not a seamless presentation on all browsers yet, including IE, which is still about half the global market. Flash penetration, meanwhile, is about 97 percent of better, according to Adobe. For web video, Flash, regardless of its shortcomings and critics, is the de facto standard. HTML5 may well get there, and when it does, so will we. At which time its current advocates will be pillorying us for not keeping up with whatever they’re enjoying then. (I think this is what Elton John once referred to as “The Circle of Life”.)

If you haven’t seen it already, check out our new video page at https://www.nasa.gov/videos. We feel like it’s a pretty big step forward, but as always, we want to hear what our users think. 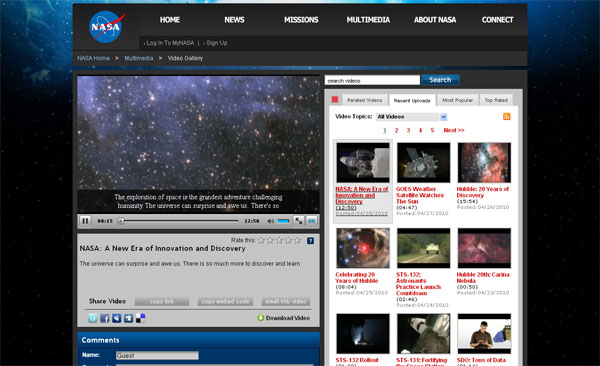 We’ve heard you loud and clear over the years — in  mail, tweets, and other communications everyday from every corner of the globe. And one of the most frequent complaints has been the way we presented videos.  The biggest challenge has always been how to deal with multiple formats produced by various video teams at NASA Centers all across the country.

Just a few years ago, we simply opened videos using the “native player” — a .mov opened with QuickTime, a .rm with RealPlayer, a .wmv with Windows. There was no context; videos were presented one at a time and not grouped with other videos.

A few years later, we developed a standard video player that at least grouped our videos together and automatically detected a users settings, but still required various browser plug ins to see all the videos. We still weren’t quite there.

So we pulled together a working group made up of some of the agency’s web editors, technicians, and video professionals to gather requirements. It was pretty clear from their work and from your comments that we needed a single format for all videos. So we evaluated several commercial off the shelf technical solutions, made a selection, and began the transition to Flash-based video.

Now, visitors to NASA.gov can finally view our videos without the need to install multiple plugins — all you need is a Flash player. The videos are displayed in several ways, from recent uploads to topics such as “Solar System” or “Earth.” Users can search for a video without leaving the video page, or browse by most popular and top rated. In addition to rating, viewers can also comment on videos, download them to their local computer, share with a friend via e-mail and social networks, or copy the embed code to post in their own blog.

Many of these features will be familiar to you if you look at any video sites on the Web today. While video may seem like an easy thing to fix in the age of YouTube and other video sharing sites, it can get pretty tricky for a large organization like ours. We certainly wish we’d gotten here sooner, but we’re glad to be here now.

As always, we’ve still got a few things on the drawing board, and we’d love to have your feedback. 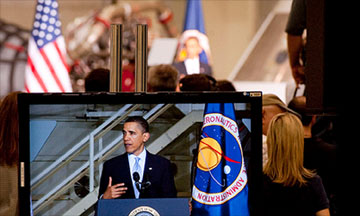 Last Thursday was a very busy day for those of us here at NASA.gov. It was a day of many firsts, as we worked hard on special coverage of President Obama’s visit to the Kennedy Space Center, where he spoke about the new course for NASA and the future of the U.S. in human spaceflight.

In a first for NASA.gov, we streamed live video coverage of the visit in high definition (HD). Web users increasingly expect to see HD video online, with sharing sites like YouTube and Vimeo offering increasingly higher and higher quality video. Thursday was an important test of this capability for the team here and overall, it went really well.

In today’s online world, single-person teams armed with cell phones and social media accounts seem to accomplish this type of work routinely, and technology has made it much simpler. But most people in those situations don’t worry too much about technical risk. If the gear fails, it fails. At NASA.gov, we worry a lot about the risk. Regardless of technical difficulties, people still expect to see what they came to see. We tend to spend most of our time not worrying over how to make something happen, but how to keep things from going south once we’ve got it working.

That takes a lot of geographically dispersed people working closely together. We were getting our HD video from a team on the ground at the Kennedy Space Center who fed it to the encoding team at the Marshall Space Flight Center in Alabama. Their encoded web stream went to our commercial data centers in Texas and Virginia, then out to the globe via Akamai and Yahoo!. Only then did it get on to your computer.

Additionally, there was the NASA.gov Web and Multimedia Team, plus the NASA TV Master Controllers at NASA Headquarters in Washington, D.C. who helped provide support and coordination of the video streams and coverage. Also involved were our colleagues at the White House’s operations. With coverage on streaming NASA TV, NASA.gov, internal NASA websites, and on White House Live, there was an incredible breadth of locations where viewers could watch this event online, including Yahoo!’s main web page for a while.

In addition to the HD streams, the space conference following the President’s speech was streamed in standard definition. This conference included several sessions, including four simultaneous breakout sessions that were webcast only. With the standard three channels of NASA TV streaming, plus the Space Station views stream, we were broadcasting eight unique feeds of video at one time, another first.

Beyond the streams, we provided a full-spectrum of coverage before, during and after the event. One hour into the event, multiple photos were online, and the arrival video was posted. We continued this level of coverage throughout the remainder of the conference and well into the evening as more and more materials became available.

Additionally, all of these materials were also posted in multiple locations across cyberspace. This included photos going into photo galleries on NASA.gov and on Flickr from teams of photographers located on the ground in Florida. It also included videos being posted to the NASA.gov video collections, the NASA.gov HD page and also on YouTube. We also posted MP3 soundbites on the NASA Audiofile page, and supporting documents across the NASA.gov site.

In all, this was a busy, but exciting day for us here on the NASA.gov team as we provided this special coverage of the event. Hopefully, some of these technologies will be used again in the future and eventually, become standard fare for our online offerings. Let us know what you thought of it all. Did you like our coverage? Did something not work right for you? Please let us know. We’re always listening.