NASA was well represented last night at the 14th annual Webby Awards Gala in New York City. Six of us were there, representing the teams behind the three award winning sites: NASA.gov, NASA Home and City 2.0 and Global Climate Change.  It’s not our first time as winners (and we hope it won’t be the last), but is was the first time a real-life moonwalker took the stage to accept the award 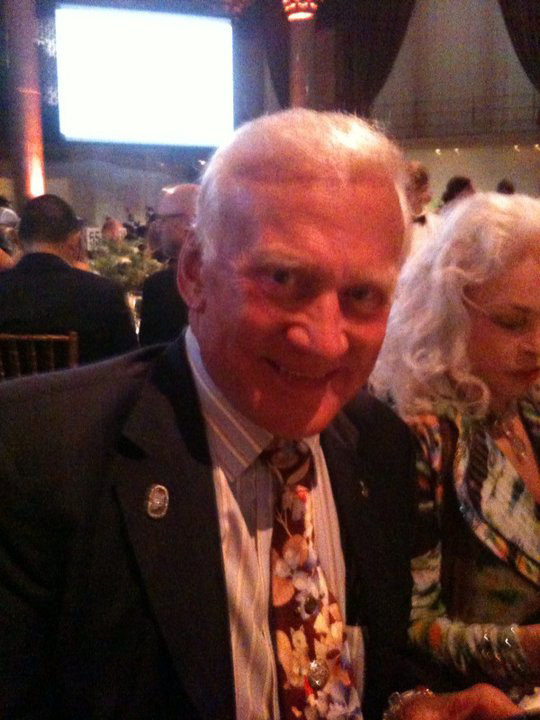 .  Few who were there are likely to forget it.

Legendary Apollo 11 moonwalker Buzz Aldrin and his wife Lois joined us at the NASA table at the beginning of the night. From the start, it was clear that the stars of the web world were starstruck by Buzz. A steady stream of admirers lined up for handshakes and photos throughout the night.  There were plenty of celebrities on hand for the event, but it was clear that Buzz had an entirely different level of star power.

Near the end of the evening, Buzz was called to the stage to accept for the three NASA groups. Even before he took the stage, the crowd and other awardees cheered him on (with some sometimes colorful language I can’t share here). Once he was announced, the room erupted with a standing ovation and sustained applause that outshone any other moment of the night.  After some playful mugging for the cameras, Buzz gave the traditional 5-word Webby speech: “Humanity. Colonization. Phobos. Monolith. Mars!” (see it on YouTube).

It’s easy sometimes for those of us who work at NASA to start to see it as routine. It is after all, a job for us, with the ups and downs and stresses of any other job. But events like this remind us that what we do is just inherently cool to the outside world. The Apollo 11 landing happened before many of the people in the room were even born, but Buzz still has the power to inspire, because of the simple but awe-inspiring fact: He traveled a quarter million miles from Earth and walked on the surface of the moon. All in an age before the technology behind the Webby Awards even existed.

It was a great feeling for the whole NASA group. I can only close with my own five word speech: “My government job is cool.”