Last month, Google released what it considers the top 1,000 web sites in the world and NASA made the list. We were honored to make the cut and were the third highest federal government site on the list. Some would think that a well deserved vacation is in order since we’re already on the top web site list. But our teams are working harder than ever to improve the site.

We’re constantly fine tuning NASA.gov to make it easier to navigate and more enjoyable for you. We’ve been making a host of minor tweaks lately. Some are barely noticeable, while others are major improvements: 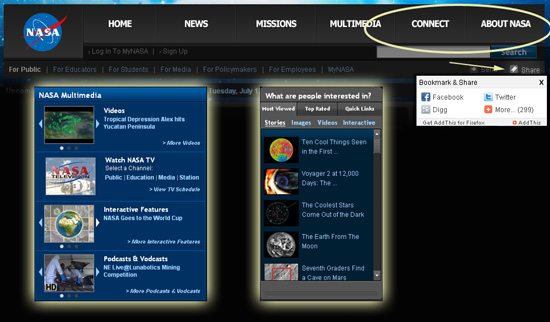 A compilation of screenshots of some of the changes we made to the site recently.

Additional improvements in the works include updating our Twitter box on the homepage to make it easier to understand which tweets are coming from where, adding additional Facebook and Digg integrations so you can ‘Like’ our pages without having to share them on your social networks, and making improvements to our mobile web to accommodate smartphone users visiting NASA.gov. As these improvements come online, we’ll be sure to let you know.