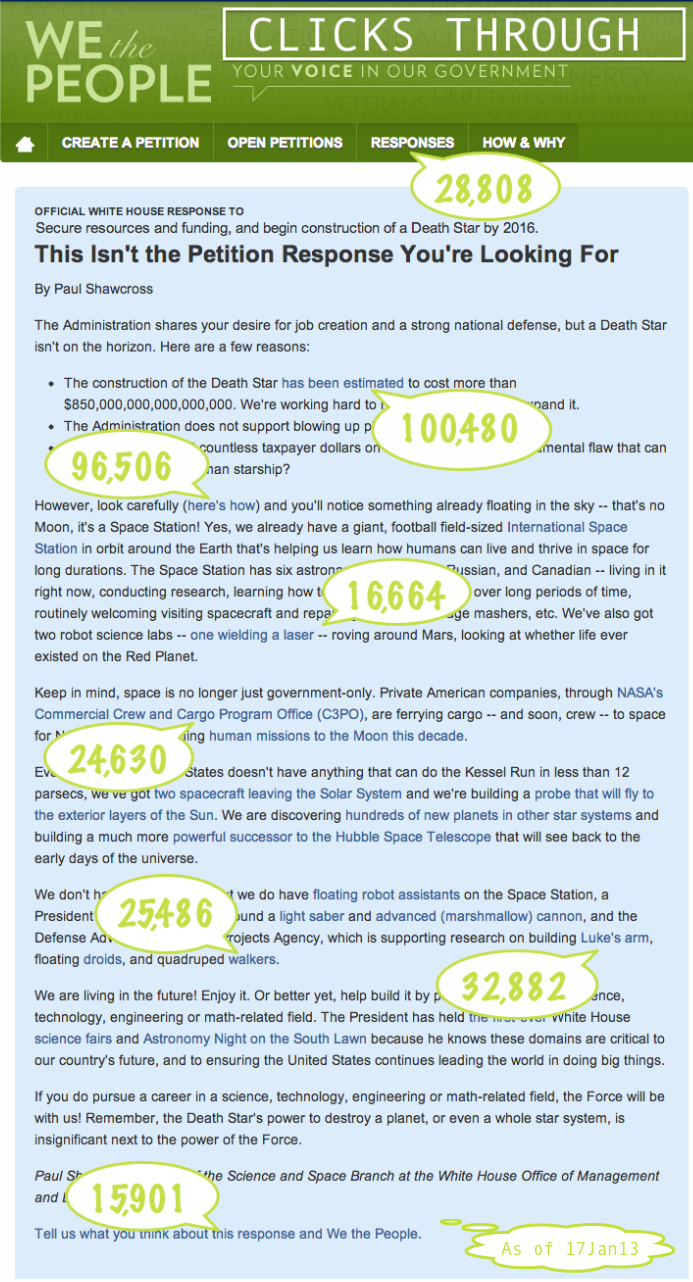 The White House response to a petition on building a Death Star (and the resulting media attention) led to some pretty interesting data here at NASA.gov. While the petitioners wanted to focus on a big project done a long time ago in a galaxy far, far away, the response led to thousands of Americans finding out about projects NASA is currently working on right here on Earth and in our Solar System.

One example is a reference to NASA’s Spot the Station tool, which helps direct people to where and when to see the International Space Station in the night sky. Over 10,000 people signed up for the tool on Jan. 12, the day after the blog response was posted. Compared to similar periods, NASA saw a 1,400% increase in Spot the Station site usage.

Both NASA’s Mars Curiosity and International Space Station pages had their highest traffic days of the month on Jan. 12. Both saw a jump in page views between one and two times the monthly average.

The impact on NASA’s Commercial Crew and Cargo Program Office (C3PO) page was huge. Traffic to the site increased about 200x between Jan. 10 – 12. The traffic over that weekend represents more than half the traffic to that page for the entire month.

One major goal of NASA and the Administration is to encourage students to take interest in science, math, engineering and technology. Maybe the idea of a Death Star petition wasn’t so crazy. Maybe a few future explorers were inspired by some of NASA’s space missions.

And if Star Wars fans need something spacey to watch while waiting for Star Wars: Episode VII to arrive in theaters, why not tune into NASA’s YouTube Channel and see some of the amazing things being done by folks here on planet Earth.

Image Above: The White House response to the We The People “Death Star” petition, with click-throughs highlighted. View the full size image here.