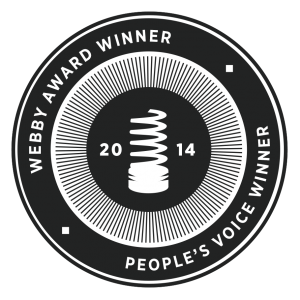 It’s that simple. For the seventh time (and fifth in the last six years), you — the Internet public — have awarded NASA the Webby’s People’s Voice award for government websites. When the last results were published before voting closed, NASA’s site had 57 percent of the vote.

Though it has been nice to win the judges’ Webby in 2003 and 2012, it means more to the NASA web team to have won the People’s Voice Award in 2002, 2003, and from 2009 through 2012. We are grateful for the continued support you have given us, not just by voting for us but by visiting the site every day. More than a quarter of a million of you do. The NASA.gov team takes that as validation that we’re doing what we’re supposed to be doing: conveying the excitement of exploration to the public.

That takes a considerable team. Including infrastructure team members, more than 100 people work on www.NASA.gov. They sift through a considerable amount of content to bring you the best of what NASA does. Some days there’s so much going on that a story will make it to the front page in the morning and be forced off for newer, bigger stories before the end of the day.

I’d be remiss in not congratulating the other nominees: our federal colleagues at the National Oceanic and Atmospheric Administration and web teams from the city of New York, Sweden and Wales. NASA’s Jet Propulsion Laboratory was an honoree in the government category, and Space Center Houston, the private group affiliated with NASA’s Johnson Space Center, was a nominee in the science category.

And we’re not finished. As I’ve noted on the blog before, we headed into redesign that will address some of the problems people have (primarily visual clutter that makes navigation difficult) and turn www.NASA.gov into a responsive site that works much better on mobile devices. Stay tuned.

It doesn’t sound like much fun: take everything you’ve been doing at work and figure out an entirely new way of doing it. But it’s a fact of life on the Internet: technology changes so rapidly, driving equally rapid changes in how people use it, that as soon as you’ve brought everything up to date you start falling behind again. At NASA.gov, we enjoy that challenge.

Which brings us to today’s topic: a new design for www.NASA.gov (the fourth major overhaul since I started managing the site in 1995) and how you can help us realize it. Since we last reworked the site in 2007, the digital world has changed radically. Social media effectively takes content off of websites and puts it wherever people are, quite often on mobile devices rather than computers. We need to adapt and update how we manage and present the site.

The new design will have five goals:

Each of these goals is worth a short blog post, which will come out in the next few weeks. For the time being, it’s back to first principles.  Before we do any design work, we need to establish the site’s organization. According to our customer-satisfaction data, the basic structure still works, but we’re going to have to present it a little differently to achieve our goals.

That’s where you come in. Through an online service called Treejack, we’ve set up a mock navigation structure and a set of tasks for you to try to accomplish using it. You point and click to tell us which navigation elements you’d use for each task. Based on what you do, we can see if we need to move things around or relabel categories to try to help you find things. There are no right or wrong answers; we’re testing the navigation, not you.

If you’d like to help, visit the NASA navigation exercise. It shouldn’t take more than 15 minutes, and you will not be asked to provide any personal information. Thanks for taking the time to make this site better.

The NASA.gov team was very happy today to learn that the Agency’s website has been nominated for the sixth time for the Webby for government sites. It’s always an honor when any group compliments the site, but we get really pumped when it comes to the People’s Voice Award.

The Internet community has awarded us five People’s Voice Awards, including four in a row from 2009 to 2012. We take that as a significant endorsement that we’re running NASA.gov effectively for its primary audience – you, the public. We’ve got various metrics, including traffic and customer-satisfaction data, that tell us we are generally getting it right, but a direct vote of confidence like this is even better.

NASA.gov represents the work of dozens of people across NASA, including content editors, infrastructure vendors and staff from our CIO office, Communications and all NASA offices and centers. Together we are a 24/7/365 news operation working to bring you news on all of NASA’s programs whenever it happens.

(Don’t believe me? Join the Marshall Space Flight Center for its Up All Night chat on next week’s lunar eclipse. The chat room opens at 1:45 a.m. EDT on April 15.)

Now you have the opportunity to speak your mind again, by voting in the 2014 People’s Voice Awards.

(You will have to create a user account and presumably allow a cookie or other tracking technology to be used, as the Webby organizers are trying to prevent multiple votes from any account.) Once you’re signed in, you can search for NASA or find us under the Web > Government category.

NASA.gov is up against other worthy sites, of course, including our federal colleagues at NOAA for climate.gov. All of the nominated sites reflect a lot of hard work on someone’s part, so give them a look and cast your vote for the one you think best represents government on the web. And whether you vote for us or not, thank you for your support over the years.