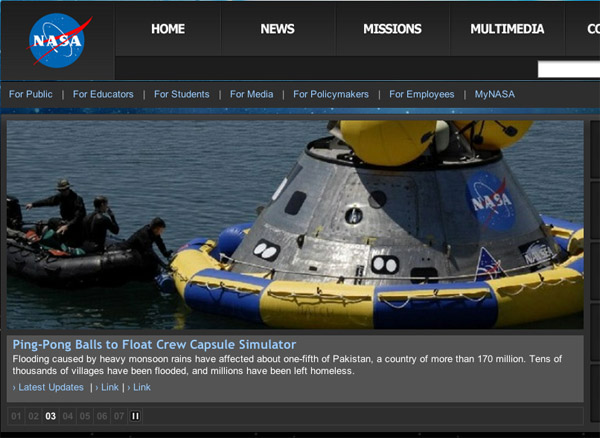 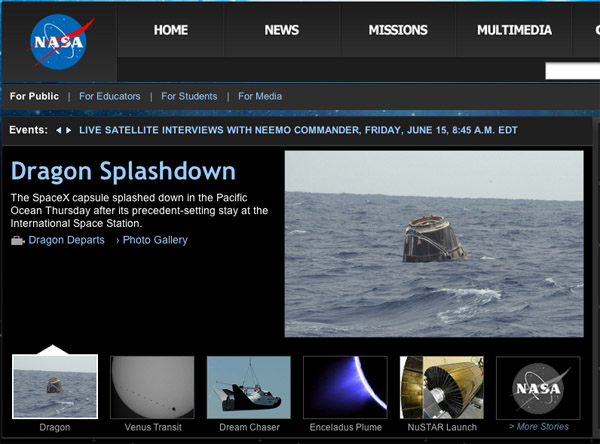 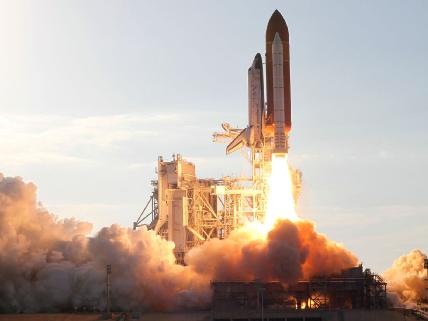 So we’ve rolled out our brand new video player– Flash, no multiple formats, only one plug-in required for most browsers, interface and controls that have been made de facto standards by a certain popular video site – and we’ve rolled right into the latest technology firefight, encapsulated by this comment from a discerning NASA.gov user:

“Why are you wasting time on Flash? HTML5 is the coming thing and makes any plug-in unnecessary. Plus your Flash player won’t work on my iPhone or iPad.” – Steve Jobs

No, not really. But it’s a valid thought, and the response has to do with how we work around here, sometimes by choice, but most times by necessity.

We’ve been working on the Flash video system for some time, because we’re as tired as everyone else of dealing with multiple formats to cover all major platforms. As YouTube has demonstrated, Flash is a great format for getting video across platforms with a minimum of hassle for the user.

I realize no one wants to hear about limited staff or budgets, but the reality of our world is that our staffing at NASA HQ (3 editors and 3 multimedia developers) and rigid budget always puts development on the back burner relative to daily operations. Between shuttle missions, high-profile anniversaries and fundamental shifts in U.S. national space policy, we haven’t had a lot of time recently to work on new things.

And as we just as we shift to Flash, the technology is already moving beyond it. That’s not surprising. In fact, I’d argue that’s exactly the way it should be. As a government web site, we spend taxpayer dollars. The best use of that money is to spend it on making our content available to the widest number of people, and that means developing to more widespread – i.e., older — technology.

The biggest problem with HTML5 is that it’s not a seamless presentation on all browsers yet, including IE, which is still about half the global market. Flash penetration, meanwhile, is about 97 percent of better, according to Adobe. For web video, Flash, regardless of its shortcomings and critics, is the de facto standard. HTML5 may well get there, and when it does, so will we. At which time its current advocates will be pillorying us for not keeping up with whatever they’re enjoying then. (I think this is what Elton John once referred to as “The Circle of Life”.) 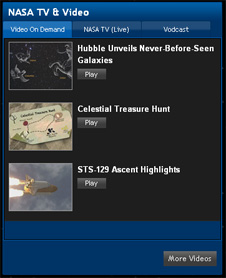 You might have noticed a condensed homepage that launched earlier today. In response to your feedback on the old ‘NASA TV & Video’ box, we’re trying a new approach to surface different types of multimedia without burying some content in “hidden” tabs.

Combining the NASA TV channels, on-demand video, interactive features and podcasts & vodcasts into a single box allowed us to shrink the page and reduce a little “clutter.” As a result, we shrunk the blogs box to half its size, allowing us to showcase only the most recent blog posts.

We’ve also removed the polls and quizzes box from the homepage, since our stats showed only a small percentage of our users were interacting with it. We’ll continue to engage users with polls and quizzes elsewhere on the site, but we want to focus the homepage on the most useful information for our visitors. 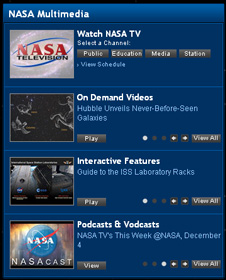 Other things that have been on our to-do list for a while include the cleaning up of links on the homepage in the right column. By combining some similar links (like NASA Directorates and Mission Support Offices), and eliminating redundant links, we were able to tighten up that right column. We hope this will help streamline items.

This is all part of an effort to slim down our addiction to links all over the homepage, since our audience has consistently asked us to eliminate clutter. This change has already helped us eliminate about 25 links, and we’ll keep chopping it down.

There are more changes still to come. For example, before the new year, we’ll being rolling out a new schedule for NASA TV that works more like the TV channel listings you’ve seen on the big Internet portals.