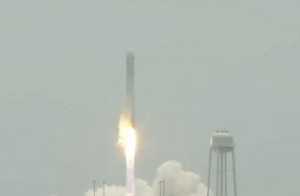 Orbital Sciences Corp.’s Cygnus spacecraft with cargo for the International Space Station launched as scheduled at 12:52 p.m. EDT aboard an Antares rocket from the Mid-Atlantic Regional Spaceport Pad 0A at NASA’s Wallops Flight Facility in Virginia. Rendezvous of Cygnus with the space station is scheduled for the morning of July 16.

With roughly 11 minutes left in the countdown, the Orbital Sciences and NASA launch teams gave approval to launch as scheduled at 12:52 p.m. today. There are no technical issues and the weather remains 90-percent favorable.

Loaded with cargo for the International Space Station, Cygnus is launching aboard an Antares rocket from the Mid-Atlantic Regional Spaceport Pad 0A at NASA’s Wallops Flight Facility in Virginia.

With about 30 minutes until launch at 12:52 p.m. EDT, chilling of the Antares rocket’s fuel lines is proceeding as planned. These lines are cooled to ensure efficient delivery of the fuel to the main engines at the time of ignition.

Fueling of the first stage of the Antares rocket with liquid oxygen and rocket-grade kerosene started began about an hour-and-a-half before the scheduled launch time of 12:52 p.m. EDT today, July 13.

Weather continues to be good and no significant issues are being worked.

The countdown is progressing smoothly today for the launch of Orbital Sciences Corporation’s Antares rocket, with the Cygnus cargo spacecraft on top. With roughly 2 hours, 12 minutes left in the countdown, weather remains 90 percent “go.”

Liftoff is scheduled for 12:52 p.m. EDT from the Mid-Atlantic Spaceport’s Pad 0A at NASA’s Wallops Flight Facility in Virginia. There is a five minute window for launch.

Live coverage of the launch on NASA TV will begin at noon, with general footage of the mission airing at 11:30 a.m.

Cygnus is loaded with about 3,300 pounds of science investigations, food, supplies and hardware for the space station and its crew.

A launch this afternoon will result in Cygnus catching up to the space station on Wednesday, July 16. Cygnus will be grappled at approximately 6:39 a.m. by Commander Steve Swanson of NASA. He will be assisted in a backup position by Flight Engineer Alexander Gerst of the European Space Agency. Cygnus will be attached to the Earth-facing port of the station’s Harmony node and will remain in place approximately one month. It is scheduled depart the space station on August 15.

This is Orbital’s second contracted mission to the International Space Station under its Commercial Resupply Services contract with NASA.

Orbital Sciences Corp.’s Cygnus spacecraft with cargo for the International Space Station is scheduled to launch aboard an Antares rocket on Sunday, July 13 at 12:52 p.m. EDT. Liftoff will be from the Mid-Atlantic Regional Spaceport Pad 0A at NASA’s Wallops Flight Facility in Virginia. NASA Television coverage of the launch will begin at noon.

The countdown to the launch starts at T-minus 3 hours, 50 minutes, roughly 9 a.m., and features a number of “holds.” These planned pauses vary in length, but they all allow the team to target a precise launch window and provide a cushion of time for various tasks and procedures without affecting the overall schedule.

The launch window (that is, the time period on any given launch day in which liftoff must occur for the spacecraft to reach its target) on July 13 is about five minutes long.

The liquid-fueled first stage of Antares ignites at T-minus zero, and the rocket lifts off about two seconds later.

“MECO,” or main engine cutoff, occurs about four minutes after that, at which point Antares will be about 63 miles high, traveling about 10,118 mph. The first stage separates a few seconds later. About 90 seconds later, the fairing (the protective covering around Cygnus at the top of the rocket) opens and separates.

The solid-fueled second stage ignites and burns for a bit longer than two minutes. Two minutes after that burn, the payload (that is, the Cygnus cargo spacecraft) separates from the second stage. At that point, Cygnus will be about 125 miles high, traveling at 16,835 mph.

Just over 10 minutes after launch, Cygnus will reach its preliminary orbit, deploy its solar arrays and begin a carefully choreographed series of engine firings to reach the station.

At a Launch Readiness Review Saturday, managers for Orbital Sciences Corp. of Dulles, Virginia, and NASA gave a “go” to proceed toward the Sunday, July 13, launch of the Orb-2 cargo resupply mission to the International Space Station. Orbital is targeting a 12:52 p.m. EDT launch from the Mid-Atlantic Regional Spaceport Pad 0A at NASA’s Wallops Flight Facility in Virginia. NASA Television coverage of the launch will begin at noon.

There is a 90-percent chance of favorable weather at the time of launch.

A pre-launch news briefing was held at 4:30 p.m.on Saturday, July 12, at the Wallops visitors center, to discuss the status of the mission.

The Weather Office at NASA’s Wallops Flight Facility in Virginia reports that the forecast remains 90-percent favorable for the Orb-2 Antares rocket launch from the Mid-Atlantic Regional Spaceport’s Launch Pad 0A at Wallops. Launch is scheduled for July 13 at 12:52 p.m. EDT.

The main weather concern for the launch appears to be a very slight chance of convective clouds (cumulus) near the vehicle path.

High pressure begins to build off the Northeast coast this evening, while an upper-level trough starts to dig over the Great Lakes by Sunday morning. High pressure off the eastern seaboard will remain in control of the Wallops region on Sunday afternoon with dry and slightly breezy conditions, as an upper-level disturbance and cold front moves into the western portion of the Mid-Atlantic. The upper-level disturbance and cold front will move toward the Wallops region on Monday, with a slight chance of showers and thunderstorms by early afternoon Monday, and a better chance of showers and storms by Monday evening.

Should the launch slip to Monday, July 14, the current forecast reports 70-percent favorable weather. Weather concerns for a Monday launch are, at present, convective clouds, disturbed weather and wind.

A few days after launch, the Orb-2 mission’s Cygnus cargo spacecraft will arrive at the International Space Station with supplies for the crew, hardware and scientific experiments. This video shows the arrival of Orb-1’s Cygnus at the space station in January, as well as a portion of its unloading by the Expedition 37/38 astronaut crew.

Orb-2’s Cygnus is scheduled to launch aboard an Antares rocket from the Mid-Atlantic Regional Spaceport’s Launch Pad 0A at NASA’s Wallops Flight Facility in Virginia on Sunday, July 13 at 12:52 p.m. EDT. Its arrival at the station is scheduled for July 16.

After about a month, the crew will detach the vehicle (at that point filled with disposal cargo), use the station’s robotic arm to maneuver it away from the station and release it. At the end of its mission, Cygnus will re-enter Earth’s atmosphere over the South Pacific.

NASA’s Earth Observatory provided the above satellite view, as well as a write-up of NASA’s Wallops Flight Facility in Virginia:

More than 70 year ago, wild ponies roamed the marshes and beaches of Wallops Island, a barrier island on Virginia’s Eastern Shore. Today, the island is the site of a thriving spaceport that launches several commercial and government rockets each year.

Wallops has a long history with rockets. On July 4, 1945, NASA’s predecessor (the National Advisory Committee for Aeronautics, or “NACA”) launched the first rocket from Wallops, making the island one of the oldest launch sites in the world. Since then, more than 14,000 rockets have lifted off. While most involved modestly-sized meteorological and sounding rockets, the completion of Launch Pad 0A at the Mid-Atlantic Regional Spaceport (MARS) in 2011 has made it possible to launch larger and more powerful rockets.

Orbital Science Corp.’s Antares is one such rocket. Orbital’s Cygnus spacecraft with cargo for the International Space Station is scheduled to launch aboard an Antares rocket on Sunday, July 13 at 12:52 p.m. EDT.