NASA’s Orbiting Carbon Observatory-2 is in great condition following liftoff earlier today from Vandenberg Air Force Base in California, and is ready to begin a checkout process before it starts its work of measuring and mapping carbon dioxide in Earth’s atmosphere.

“We have a healthy observatory,” said Ralph Basilio, the OCO-2 project manager from NASA’s Jet Propulsion Laboratory in Pasadena.

An initial checkout reveals the OCO-2 spacecraft is in good condition and communicating with space- and ground-based communications networks, Basilio said. The observatory’s subsystems appear to be functioning properly.

OCO-2 was delivered into a polar orbit by a United Launch Alliance Delta II rocket.

The satellite ultimately will join the agency’s “Afternoon constellation” of Earth-observing satellites, known as the “A-train.” From its vantage point 438 miles above Earth’s surface, the nearly 1,000-pound observatory will spend two years searching for sources of carbon dioxide as well as places where it is naturally stored, called “sinks.”

The mission is significant because carbon dioxide is the leading human-produced greenhouse gas responsible for Earth’s warming temperatures.

“It’s a great day for NASA and for the nation,” said Geoff Yoder, Deputy Associate Administrator for Programs in NASA’s Science Mission Directorate.

“This is the next step in an important journey for all of us who live on this planet and future generations, our children and grandchildren,” Basilio added. 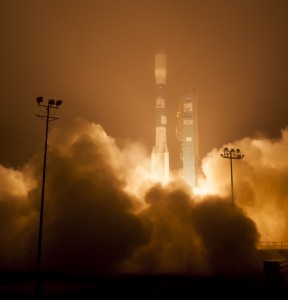 NASA’s Orbiting Carbon Observatory-2 is in orbit this morning following a flawless countdown and ascent aboard the United Launch Alliance Delta II rocket. Liftoff from Space Launch Complex 2 at Vandenberg Air Force Base in California was right on time at 2:56 a.m. PDT/5:56 a.m. EDT.

This brings live coverage to an end. There will be a post-launch news conference at 5:30 a.m. PDT/8:30 a.m. EDT. Watch it live on NASA TV at www.nasa.gov/ntv.

The observatory’s solar arrays have deployed and are power positive according to NASA Launch Manager TIm Dunn.

The Delta II “performed like a champ” throughout the countdown and ascent, he added.

“There was pure joy in the Mission Director’s Center at spacecraft sep, I can tell you that,” Dunn said. 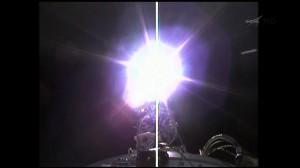 Onboard cameras captured the separation of the OCO-2 spacecraft from the Delta II second stage:

Data from the spacecraft is flowing through the space-based Tracking and Data Relay Satellite System.

NASA’s Orbiting Carbon Observatory-2 is flying solo after its successful separation from the Delta II rocket’s second stage. In the next three minutes, the spacecraft will stabilize itself and begin deploying its solar arrays.

Second-stage engine cutoff-2 is complete! The rocket is moving into position to release OCO-2.

Restart! The second-stage engine is burning for the final time. This is a short pulse lasting only 12 seconds.

We’re less than a minute away from the restart of the second-stage engine to put OCO-2 in place for release. The OCO-2 spacecraft and Delta II vehicle are in good health as the coast phase comes to an end.