The vehicle and spacecraft have entered a coast phase lasting about 40 minutes. 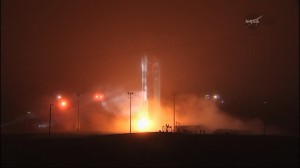 Check out this screen capture taken from NASA TV just as the Delta II began to rise from Space Launch Complex 2. Liftoff occurred on time at 2:56 a.m. PDT, 5:56 a.m. EDT.

The payload fairing that protected OCO-2 during the early minutes of flight has separated, allowing the observatory to encounter the space environment for the first time.

Everything continues to go according to plan as the Delta II rocket continues its climb. The first stage separated on time and the second-stage engine has started its first of two burns today, providing 9,753 pounds of thrust to keep OCO-2 on course for its release later this morning.

The vehicle just passed Mach 5 and all is going well with the flight.

The vehicle has passed Max Q, the area of maximum aerodynamic pressure. The solid rocket boosters completed their burn about a minute into the flight and have fallen away.

Ignition and liftoff! OCO-2’s voyage gets underway with a spectacular predawn liftoff from Space Launch Complex 2 at Vandenberg Air Force Base. The Delta II rocket is lighting the skies as it climbs out over the Pacific Ocean.

The rocket’s first stage is providing 200,000 pounds of thrust and getting an additional boost from the three solids. The first stage will burn for nearly four-and-a-half minutes before spending its fuel and separating from the rocket.

Liftoff is one minute away!