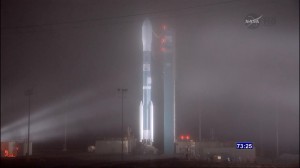 A thick fog has settled in over the launch area, surrounding the Delta II rocket awaiting liftoff from Space Launch Complex 2. The fog is not a problem for launch.

Valves are open and liquid oxygen is beginning to flow into the Delta II rocket’s first stage. This is a cryogenic propellant, meaning it’s cooled to an extremely low temperature — in this case, minus-297 degrees Fahrenheit.

OCO-2’s ride into space is the United Launch Alliance Delta II rocket, a vehicle with a lengthy and reliable history. From Earth-observing missions like Aquarius, CloudSat and CALIPSO, to interplanetary voyages such as the Mars Phoenix lander, and astronomy missions like Kepler and WISE, the Delta II has boosted many of NASA’s most well-known missions into Earth orbit and beyond.

The Delta II standing on the launch pad today is 128 feet tall and eight feet in diameter, with a 10-foot payload fairing. The vehicle consists of two stages, plus a trio of solid-rocket boosters attached to the first stage. At T-0, the solids will ignite along with the first stage’s RS-27A engine. The first-stage engine is powered by a combination of liquid oxygen and RP-1, a refined kerosene fuel already on board the rocket. The second-stage tanks already are filled with hypergolic propellants that will burn when they touch each other — no need for an ignition source.

Launch Weather Officer Lt. Joseph Round of the 30th Operations Support Squadron just briefed the launch team on this morning’s conditions. With nothing significant on the radar and light winds at about 4 knots, there are no violations of weather criteria and there is virtually no chance of weather interfering with liftoff today. The fog enveloping the launch area is not a concern.

It’s early in the morning at Vandenberg Air Force Base in California, but the launch team has been up through the night preparing for today’s liftoff of NASA’s Orbiting Carbon Observatory-2 aboard a United Launch Alliance Delta II rocket. Launch is scheduled for the start of a 30-second window that opens at 2:56:44 a.m. PDT — that’s 5:56:44 a.m. EDT.

Today’s countdown actually began last night at 10:21 p.m. Pacific Time, when clocks began counting backward from T-minus three hours, five minutes. At Space Launch Complex 2, the rocket’s first and second stages have been pressurized, and loading of liquid oxygen into the first stage is expected to start in about 20 minutes.

The OCO-2 spacecraft will spend at least two years giving us a complete picture of where Earth’s atmospheric carbon dioxide (CO2) comes from — and where it’s going. Plants and oceans all over the planet take up and re-emit this invisible greenhouse gas. NASA is counting on OCO-2 to study this atmospheric give-and-take at a level of detail not available before — and perhaps solve one of Earth’s most closely guarded climate mysteries. More on that later in the countdown.

“Is there any way I can see the launch?” It’s a common question during every countdown. Try this page for launch viewing suggestions. 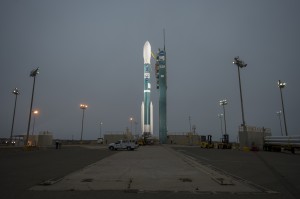 In the meantime, we’ve posted a couple of videos to bring you up to speed on the mission to come — and how the OCO-2 spacecraft and the United Launch Alliance Delta II rocket got to this point.

Check out this webcast, which explains OCO-2’s quest for carbon dioxide:

Learn how the observatory and rocket were readied for liftoff: 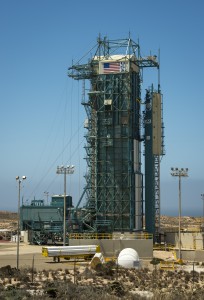 Managers gave a “go” to proceed toward the launch of OCO-2 at the conclusion of today’s Launch Readiness Review. The spacecraft is sealed atop a United Launch Alliance Delta II rocket set to lift off from Space Launch Complex 2 on Tuesday, July 1 at 2:56 a.m. PDT, 5:56 a.m. EDT. Tuesday, July 1,  at Vandenberg Air Force Base in California. There are no issues or concerns with either the observatory or the rocket, and weather is not expected to be a problem.

Monday is L-1, meaning “one day before launch.” That’s when RP-1 fuel will be loaded aboard the Delta II’s first stage, followed by rollback of the gantry-like mobile service tower surrounding the vehicle (pictured). Cryogenic liquid oxygen loading is scheduled to start early Tuesday, at 1:11 a.m. PDT, setting the stage for liftoff at 2:56 a.m.