We’re cutting the ribbon this week on our new Orion Blog to bring you the most up-to-date, official news and status on the development, flight testing and operations of NASA’s Orion spacecraft which is being designed and built to carry astronauts on deep space missions in the future to an asteroid and eventually to Mars. The Orion teams at Johnson Space Center in Houston, Kennedy Space Center in Florida and at other centers throughout the agency are preparing for the first flight test in December, a two-orbit, four-hour mission that will see an Orion spacecraft launched on a Delta IV-Heavy rocket without a crew so that engineers can evaluate its heat shield and other critical systems.

The mission calls for Orion to fly some 3,600 miles above Earth to achieve the speeds needed to test the heat shield in conditions approaching the demands of a return from deep space. It’s a fascinating flight profile that NASA has not flown with a human-rated spacecraft since Apollo. So check back here on the Orion Blog often and we’ll do our part to let you know what is going on with America’s newest spacecraft for human space exploration! 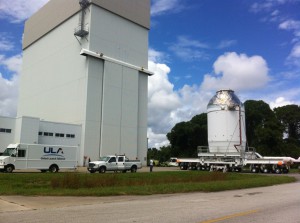