The processing of Orion and its United Launch Alliance Delta IV Heavy rocket remains on course for a launch Thursday, Dec. 4, on the first flight test of the spacecraft design. Working at Space Launch Complex 37 at Cape Canaveral Air Force Station, technicians and engineers head into Thanksgiving conducting a series of electrical and battery checks between the connections between the crew module, service module and Delta IV Heavy second stage. The processing schedule also leaves room for more testing on Orion and its system if needed without impacting the launch schedule. 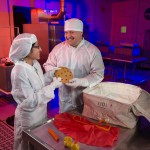 Orion will continue the Space Age tradition of taking mementos with it that will become treasured inspirations after the spacecraft returns from evaluating its systems high above Earth. Find out what makes mementos ranging from patches and pins to Sesame Street items inspirational cargo for this flight at http://go.nasa.gov/1uWWnf4

The doors of the Mobile Servicing Tower were opened recently at Space Launch Complex 37 to reveal the Orion spacecraft atop the United Launch Alliance Delta IV Heavy that will carry the spacecraft into orbit. Orion’s crew module is underneath the Launch Abort System and nose fairing, both of which will jettison about six minutes, 20 seconds after launch. The tower will be rolled away from the rocket and spacecraft 8 hours, 15 minutes before launch to allow the rocket to be fueled and for other launch operations to proceed Dec. 4.

3 thoughts on “Orion Teams on Track Heading into Holiday”