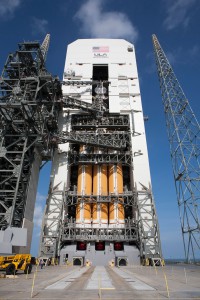 The Orion spacecraft will take crews farther from Earth than any human-rated spacecraft since Apollo. The first step of that adventure comes this week when the Orion flight test sends an uncrewed version of the capsule about 3,600 miles above Earth – far enough to encounter the high radiation zones that circle the planet and measure their effects on the inside of the spacecraft. On its way back home, Orion’s heat shield will bear the brunt of scorching plasma as the spacecraft dives into the atmosphere at 20,000 mph before slowing for splashdown.

It’s a stress test for more than the spacecraft, of course – people from NASA and Lockheed Martin along with scores of others involved in the program will watch every readout carefully. No matter what happens, the flight test has already made strides in development of America’s next deep-space vehicle for astronauts. Find out all the details of the 4.5-hour mission and what has gone into getting Orion ready for flight in our extensive preview story at http://go.nasa.gov/1HUIins

4 thoughts on “How Orion Will Make History”