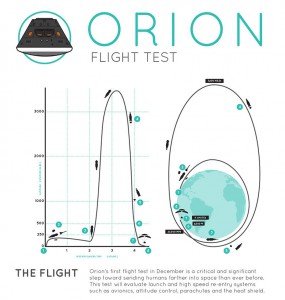 Meteorologists upgraded their outlook for Orion’s launch tomorrow morning to give it a 70 percent chance of acceptable conditions. The forecast says drier conditions are expected and the chance of coastal showers has diminished during the 2-hour, 39-minute launch window. The primary rules concerns remain flight through precipitation and high winds.

With less than 23 hours remaining before Orion begins its first flight test with a launch on a Delta IV Heavy rocket, everything remains on track for liftoff at 7:05 a.m. EST. The Mobile Service Tower enclosing the rocket and spacecraft will be rolled back to its launch position late tonight, revealing the Orion stack on the launch stand at Space Launch Complex 37.

Launch and mission control teams will report to their consoles in Florida and Houston at about 3:30 a.m. EST. Our continuous countdown, launch and mission coverage will begin at 4:30 a.m. here on the Orion Blog and on NASA TV which is available on air and streaming at www.nasa.gov/nasatv