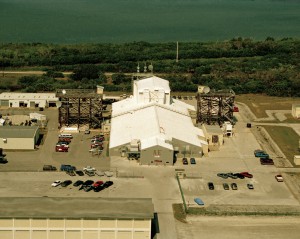 Today’s launch blog comes to you from Hangar AE at Cape Canaveral Air Force Station in Florida. We are about four miles south of Space Launch Complex 37.

AE is a NASA facility that is probably best known as the communications hub for the agency’s uncrewed missions by the Launch Services Program including the MAVEN and Curiosity missions to Mars among dozens of others. Kennedy Space Center began maintaining the facility in 1960. NASA TV broadcasts launch commentary from here for the LSP missions and today’s on-air coverage also is originating from here.