Engineers across the country have been busy taking a closer look at Orion and the data it produced during its successful flight test in December. At NASA’s Ken 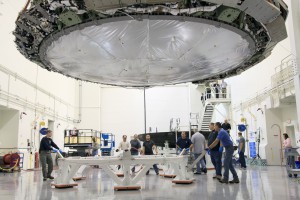 nedy Space Center in Florida, technicians removed the spacecraft’s back shell and heat shield, which protected Orion as it reentered Earth’s atmosphere at searing temperatures. Removing the back shell allows the team to get a closer look at Orion’s systems to see how they fared during the trip to space. The heat shield was removed in preparation for shipment to NASA’s Marshall Space Flight Center in Huntsville, Alabama, where special equipment will be used to remove its ablative material. From there, the heat shield will be shipped to NASA’s Langley Research Center in Hampton, Virginia, where it will be outfitted on a test article for water impact testing. Meanwhile, NASA and Lockheed Martin, the prime contractor for Orion, continue to take a look at the data the flight test produced to validate pre-flight models and improve the spacecraft’s design. A 90-day report examining the flight will be delivered to NASA by Lockheed Martin in early March.