After Orion’s successful flight test in December, NASA and Lockheed Martin program managers who oversaw the design, development and test of the spacecraft are on the move to thank employees across the country who contributed hardware, testing and other elements for Orion’s maiden voyage to space. More than 1,000 companies contributed parts for the spacecraft, showcasing American ingenuity and manufacturing capabilities. 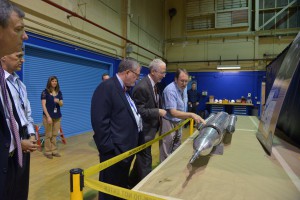 ership team will travel to several places in California, Washington, Utah, Alabama and Maryland, to name just a few states they’ll visit, to meet the people who invested time and energy into the countless elements that had to work for the flight to be successful.

On March 2, the Orion managers thanked employees at NASA’s Ames Research Center at Moffett Field, California. Teams there used the center’s Arc Jet facility to simulate the heating and air flow conditions that occurred on Orion during atmospheric reentry. Ames also developed a group of sensors on the heat shield and performed wind tunnel testing. Later this week, at NASA’s Jet Propulsion Laboratory in Pasadena, California, the Orion leadership team will thank engineers who contributed to testing of the spacecraft’s Thermal Protection System and drogue parachutes. Managers also will pay a visit to Aerojet Rocketdyne in Sacramento, and to Lockheed Martin’s Sunnyvale facility. Aerojet Rocketdyne propulsion played a critical role during Orion’s flight test, and the protective fairings surrounding Orion’s service module were tested in Sunnyvale.

One thought on “Orion Leadership Team Takes to the Road”