NASA’s new Orion spacecraft now is at its launch pad after completing its penultimate journey in the early hours Wednesday. It arrived at Space Launch Complex 37 at Cape Canaveral Air Force Station in Florida at 3:07 a.m. EST, where the spacecraft then was hoisted up about 200 feet and placed atop the United Launch Alliance Delta IV Heavy rocket that will carry it into orbit. Over the course of the three weeks that remain until the Dec. 4 liftoff, the spacecraft will be fully connected to the rocket and powered on for final testing and preparations.

NASA and Lockheed Martin leaders talked with news media about the importance of the upcoming flight test during a short session Monday at Kennedy.

The Orion spacecraft is ready to begin the final leg of its prelaunch journey with an overnight rollout from Kennedy Space Center’s Launch Abort System Facility to Space Launch Complex 37 on Cape Canaveral Air Force Station.

Weather conditions at the Florida spaceport have improved significantly since yesterday evening, when winds and the threat of lightning violated safety rules and kept the spacecraft indoors one more night.

The six-hour journey to the launch pad is planned to begin at about 8:30 p.m. Orion is expected to arrive at the launch complex around 2 a.m. It will then be lifted into place and attached atop the United Launch Alliance Delta IV Heavy rocket. 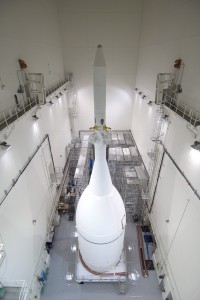