OSIRIS-REx is headed to Bennu, a roughly spherical asteroid measuring about 1,614 feet (492 meters) in diameter. All asteroids represent remnants of the building blocks of our solar system, so why did scientists decide to send a mission to this one?

Larger diameter means slower rotation. Smaller asteroids – those measuring less than 650 feet in diameter – tend to rotate faster, ejecting surface materials and making it difficult for a spacecraft to get close enough for a sample. With its larger diameter, Bennu completes its day in just over four hours, slow enough for OSIRIS-REx to approach and do its work.

Carbon-rich composition. Measurements taken from telescopes indicate Bennu is carbon-rich. This is important because primitive asteroids like these may contain volatiles and organic molecules that could trace the origins of life on Earth and the potential for life elsewhere.

Overall mission management for OSIRIS-REx, including systems engineering as well as safety and mission assurance, is provided by NASA’s Goddard Space Flight Center in Greenbelt, Maryland. Dante Lauretta is the mission’s principal investigator at the University of Arizona, and the spacecraft was built by Lockheed Martin Space Systems in Denver.

Launch management is the responsibility of the Launch Services Program, or LSP, at NASA’s John F. Kennedy Space Center in Florida. LSP selects the appropriate launcher for the agency’s science missions, provides oversight as the rocket and spacecraft come together, and conducts the countdown.

OSIRIS-REx is the third mission in NASA’s New Frontiers Program, which is managed by NASA’s Marshall Space Flight Center in Huntsville, Alabama, for the agency’s Science Mission Directorate in Washington. 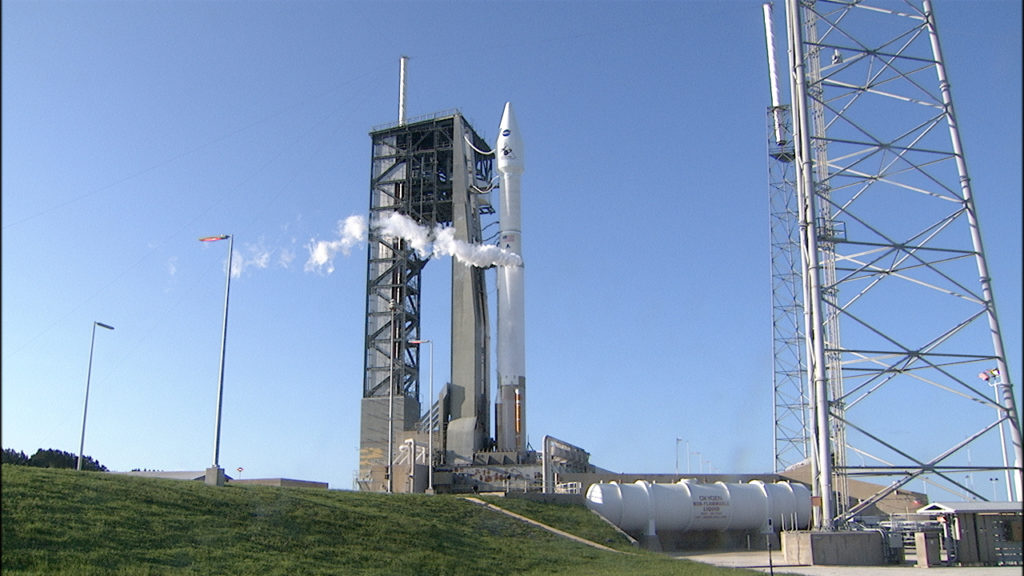 In the image above from NASA TV, viewers can clearly see gaseous oxygen venting away from the Atlas V booster. This is normal and is caused when small amounts of cryogenic liquid oxygen boil off and are vented away. 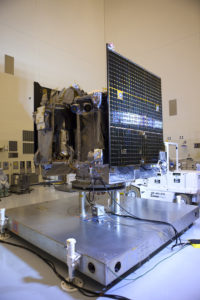 Built by Lockheed Martin Space Systems in Denver, Colorado, the spacecraft measures 10.33 by 8 feet and will be powered in space by two solar panels generating 1,226 watts to 3,000 watts, depending on the distance from the sun. With both of its arrays deployed, the spacecraft extends to 20.25 feet long. Learn more about the spacecraft and its instruments.

OSIRIS-REx is expected to reach Bennu in August 2018, collect a sample from the asteroid in July 2020, depart in March 2021, and return the sample to Earth with a parachute landing in Utah in September 2023.

“We’re following on the heels of successful NASA missions like Stardust. In fact, our return capsule is using the same technology that the Stardust mission did to bring those amazing materials back,” said Dante Lauretta, OSIRIS-REx principal investigator at the University of Arizona, Tucson, referring to the mission that launched in 1999, collected particle samples from comet Wild-2, and returned those particles to Earth in 2006.

The OSIRIS-REx mission includes seven years of spacecraft operations and two years of sample analysis in laboratories on Earth.

“We’ve got great science ahead of us,” Lauretta said Tuesday. “I’m really excited to get to this milestone — to get OSIRIS-REx launched on its journey to Bennu and back.” 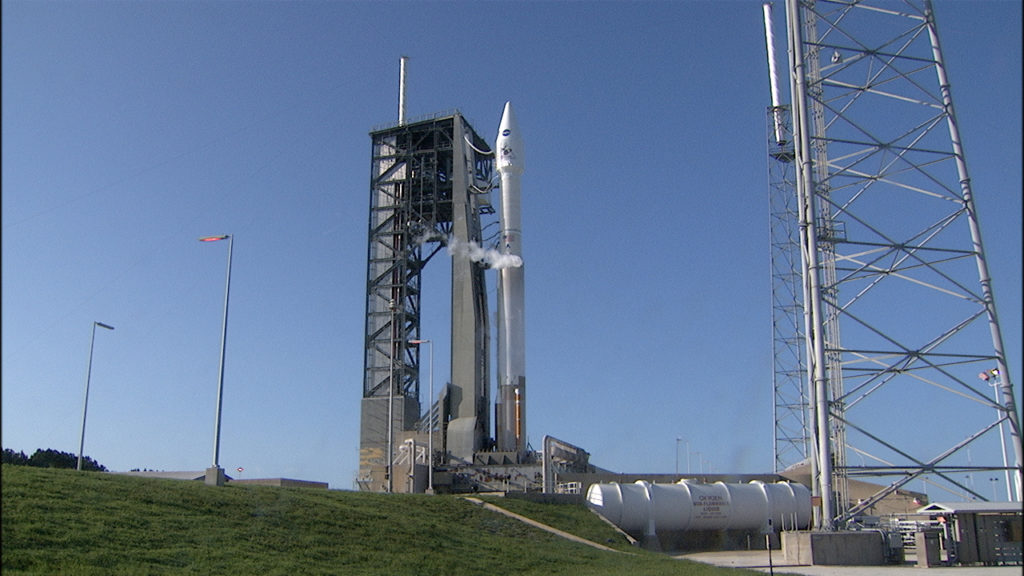 Countdown clocks just passed the T-1 hour mark and activities are proceeding smoothly. Tanking operations continue, and in case you missed it, Launch Weather Officer Clay Flinn has upgraded the forecast to reflect a 90 percent chance of “go” weather at the 7:05 p.m. liftoff time. 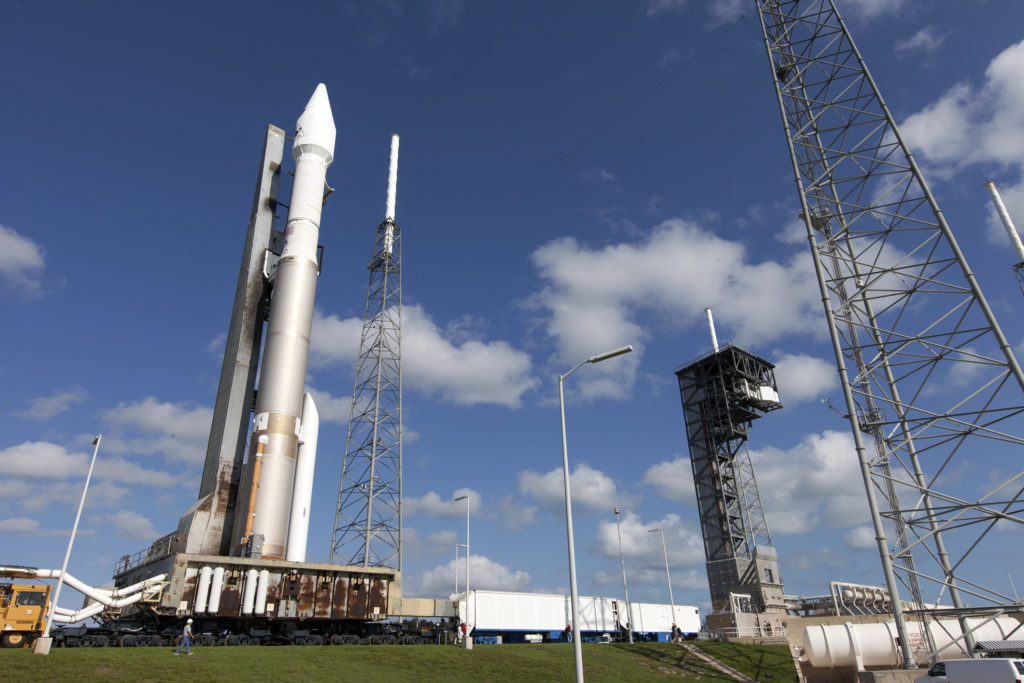 The United Launch Alliance Atlas V rocket comprises a first-stage booster, a Centaur upper stage and a protective payload fairing that houses the spacecraft during the critical early minutes of flight.

The Atlas V vehicle is available in several configurations, but the one poised to launch OSIRIS-REx is an Atlas V 411: it’s topped by a 4-meter fairing, and has only one solid rocket booster and one Centaur engine. The 411 configuration has flown three times before, but OSIRIS-REx will be its first launch with a NASA payload.

Tonight’s liftoff and the 13th time an Atlas V launched a NASA spacecraft, the 65th launch of an Atlas V overall.

“We’ve successfully launched 12 missions on this rocket: missions to Pluto, Jupiter, the moon, the sun, the radiation belts, three spacecraft to Mars — and now, the asteroid Bennu.”

Spelled out in full, the name of the OSIRIS-REx spacecraft hints at the many goals scientists envision for this mission: to map asteroid Bennu using 3-D laser imaging, retrieve samples from its surface and return those samples to Earth. 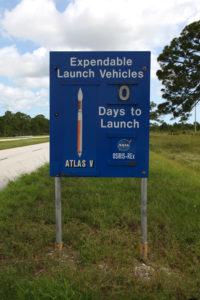 NASA’s OSIRIS-REx spacecraft — currently sealed inside the payload fairing of a United Launch Alliance Atlas V rocket — is on track to leave Earth behind and kick off an ambitious voyage to asteroid Bennu.

OSIRIS-REx stands for Origins, Spectral Interpretation, Resource Identification, Security-Regolith Explorer, and it’s the United States’ first mission to collect a sample from an asteroid’s surface and return it to Earth, where it could help answer questions about how our solar system formed and how life on our planet began.

Mission officials and launch team members are gathered in the Atlas Spaceflight Operations Center, where controllers have been stationed at their consoles since midday. NASA’s Launch Blog originates from a console in nearby Hangar AE. We’ll tell you more about the OSIRIS-REx mission — and the Atlas V rocket that’s sending it on its way — as the countdown continues, so stay with us.

Propellants are being loaded into the Atlas V rocket, a process known as tanking. It begins with chilldown of the ground equipment and transfer lines prior to the flow of supercool, cryogenic propellants. The Atlas booster’s single RD-180 engine uses 48,860 gallons of liquid oxygen, or LOX, in combination with a refined kerosene fuel called RP-1. The Centaur’s RL10-A-4-2 engine runs on 4,150 gallons of LOX and 12,680 gallons of liquid hydrogen, or LH2. RP-1 is not a cryogenic propellant like the others and was loaded into the first stage yesterday afternoon.

Countdown clocks are at T-1 hour, 39 minutes and counting.