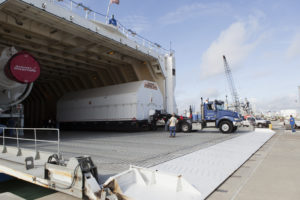 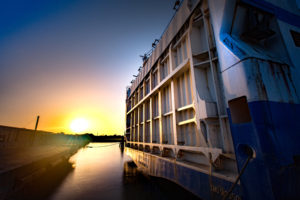 The rocket’s second stage arrived Saturday, Aug. 26, along with the third and final common booster core, which will complete the first stage. The hardware was delivered by ship to Port Canaveral, then transported by truck to the Horizontal Integration Facility at Space Launch Complex 37.

Photos at right, above: The Port Common Booster Core of the Delta IV Heavy for the Parker Solar Probe Mission is offloaded from the Mariner ship for transport to the Horizontal Integration Facility at Space Launch Complex 37. Photo credit: NASA/Ben Smegelsky. Below: Sunrise is reflected in the side of the Mariner ship and in the water of Port Canaveral below. Photo credit: NASA/Cory Huston