You don’t get to swim in the Sun’s atmosphere unless you can prove you belong there. And Parker Solar Probe’s Faraday cup, a key sensor on the spacecraft, earned its stripes on April 19 by enduring testing in a homemade contraption designed to simulate the Sun.

The cup will scoop up and examine the solar wind as the probe passes closer to the Sun than any previous human-made object. In order to confirm the cup will survive the extreme heat and light of the Sun’s corona, researchers previously tortured a model of the Faraday cup at temperatures exceeding 3,000 degrees Fahrenheit, courtesy of the Oak Ridge National Laboratory’s Plasma Arc Lamp. The cup, built from refractory metals and sapphire crystal insulators, exceeded expectations.

But the final test took place on April 19, in a homemade contraption Kasper and his research team call the Solar Environment Simulator. While being blasted with roughly 10 kilowatts of light on its surface—enough to heat a sheet of metal to 1,800 degrees Fahrenheit in seconds—the Faraday cup model ran through its paces, successfully scanning a simulated stream of solar wind.

Read the full story from the University of Michigan.

NASA’s Parker Solar Probe will carry 1,137,202 submitted and confirmed names on its journey to the Sun. Submissions opened on March 6, 2018, and closed on April 27 at 11:59 p.m. EDT. A chip containing the names will be installed onto the spacecraft before launch. 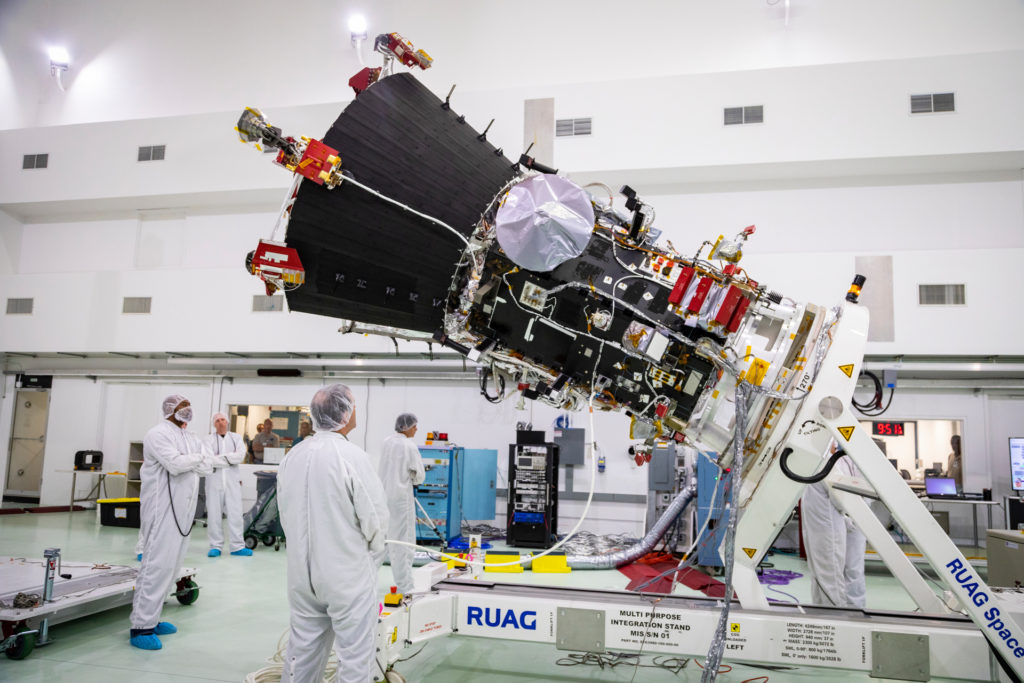 NASA’s Parker Solar Probe is rotated down to a horizontal position during pre-launch processing and testing on April 10, 2018, at Astrotech Space Operations in Titusville, Florida, just outside Kennedy Space Center. Once horizontal, the integration and testing team will measure the alignment of the heat shield mounting points with respect to the spacecraft structure. This is done to assure that the umbra (or shadow) cast by the heat shield – called the Thermal Protection System – protects the spacecraft and instruments.

On the morning of Tuesday, April 17, 2018, crews from United Launch Alliance raised the 170-foot tall Delta IV Heavy launch vehicle – the largest and most powerful rocket currently used by NASA – at Launch Complex 37 at Cape Canaveral Air Force Station in Florida. This Delta IV Heavy will carry Parker Solar Probe, humanity’s first mission to the Sun’s corona, on its journey to explore the Sun’s atmosphere and the solar wind. Launch is scheduled for approximately 4 a.m. EDT on July 31, 2018.

The launch vehicle consists of three Common Booster Cores, with a second stage on the center core; the encapsulated spacecraft, is scheduled to arrive in early July for integration onto the rocket. The spacecraft is now at Astrotech Space Operations in nearby Titusville undergoing final integration and testing. Parker Solar Probe will be the fastest human-made object in the solar system, traveling at speeds of up to 430,000 miles per hour (700,000 kilometers per hour).

The Thermal Protection System — also known as the heat shield — for NASA’s Parker Solar Probe arrived in Titusville, Florida, on April 18, 2018, bringing it one step closer to reuniting with the spacecraft that will be the first to “touch” the Sun.

The Parker Solar Probe spacecraft arrived at Astrotech Space Operations two weeks prior, on April 3, to complete final testing. Though the spacecraft was flown by the Air Force’s 436th Airlift Wing, the Thermal Protection System, or TPS, traveled on a flatbed truck, securely encased in a metal shipping container during its road trip to the Sunshine State.  After setting off on a rainy Monday morning from Maryland, it was greeted with Florida’s balmy heat on Wednesday afternoon at Astrotech, where it will eventually be reattached to the spacecraft before launch in late July.

The innovative TPS will be the one barrier shielding the spacecraft and its instruments from the intense heat of the Sun. Made of carbon-carbon composite and stretching approximately eight feet wide, the TPS will withstand temperatures of up to 2,500 degrees Fahrenheit while keeping the spacecraft and instruments at a comparatively comfortable 85 degrees Fahrenheit.  The heat shield has a plasma-sprayed white surface that will reflect the intense heat energy of the Sun’s corona away from the spacecraft.

NASA’s Parker Solar Probe has arrived in Florida to begin final preparations for its launch to the Sun, scheduled for July 31, 2018. Read the full story on nasa.gov.