At 6:07 a.m. EDT on Aug. 20, 2018, NASA’s Parker Solar Probe successfully completed its first trajectory correction maneuver (known as TCM-1), achieving a near-perfect firing of its propulsion system and putting the spacecraft on course to “touch” the Sun. This maneuver sets up the orbital geometry that will allow Parker Solar Probe to come within about 3.83 million miles (8.86 solar radii) of the Sun’s surface on its closest approach in 2024.

Following launch at 3:31 a.m. EDT on Aug. 12, the spacecraft control team at the Johns Hopkins Applied Physics Laboratory, or APL, in Laurel, Maryland, analyzed Parker Solar Probe’s position and quickly developed a re-optimized trajectory to place it in the best path for the seven Venus gravity assist maneuvers and 24 solar orbits that the mission will make. Re-assessing a spacecraft’s trajectory after launch is a normal step, as the mission team is then able to accurately track the spacecraft’s actual speed, direction and position to create a more precise trajectory plan.

“TCM-1 is one of the critical events of the mission and a major mission milestone,” said Parker Solar Probe mission design and navigation manager Yanping Guo, from APL. “In the future, we only need to fine-tune the trajectory periodically, and no major adjustments or large maneuvers will be required unless something unusual happens. In short: We are on our way to touch the Sun!”

“The team completely nailed this maneuver,” said APL’s Andy Driesman, Parker Solar Probe project manager. “Execution of the burn was exceptional, measuring at less than 0.2 percent magnitude error—which translates to a 0.3 standard deviation, or sigma, from optimal. We had defined success for TCM-1 as up to 3 sigma, which really illustrates how phenomenally this was executed.”

On Aug. 13, the high-gain antenna, which Parker Solar Probe uses to communicate high-rate science data to Earth, was released from locks which held it stable during launch. Controllers have also been monitoring the spacecraft as it autonomously uses its thrusters to remove (or “dump”) momentum, which is part of the flight operations of the spacecraft. Managing momentum helps the spacecraft remain in a stable and optimal flight profile.

There are four instrument suites on board Parker Solar Probe, which will each need to be powered and readied for science data collection. The FIELDS investigation, which consists of the most elements, went first. It was powered up on Aug. 13 for two activities. First was the opening of the clamps which held four of the five FIELDS antennas stowed during takeoff. These antennas will be deployed roughly 30 days after launch, and they will stick out from the corners of the spacecraft’s heat shield — called the Thermal Protection System — and be exposed to the harsh solar environment. Second, the spacecraft’s magnetometer boom was fully deployed. This boom contains three magnetometers and a fifth, smaller electric field antenna, all part of the FIELDS suite. Further instrument check-outs and deployments are scheduled in the coming days for the spacecraft.

“Parker Solar Probe is operating as designed, and we are progressing through our commissioning activities,” said Project Manager Andy Driesman of APL. “The team — which is monitoring the spacecraft 24 hours a day, seven days a week — is observing nominal data from the systems as we bring them on-line and prepare Parker Solar Probe for its upcoming initial Venus gravity assist.”

NASA’s Parker Solar Probe is on its way for a rendezvous with the Sun. A United Launch Alliance Delta IV Heavy rocket, carrying the spacecraft, lifted off at 3:31 a.m. EDT, from Space Launch Complex 37 on Cape Canaveral Air Force Station in Florida, its engines blazing golden in the clear night sky during ascent.

“It was a very quiet launch countdown, it went off like clockwork,” said Omar Baez, NASA Launch Director. “Parker Solar Probe has been one of our most challenging missions to date. I’m very proud of the team that worked to make this happen. We at NASA and the Launch Services Program are thrilled to be part of this mission.”

About four minutes into flight, a series of key events occurred. The Delta IV port and starboard booster engines shut down and separated, the main core booster engine cut off and then separated from the second stage. After second stage engine ignition, the payload fairing was jettisoned. After second stage main engine cutoff and separation, the Parker Solar Probe separated from the third stage, provided by Northrup Grumman. Shortly afterward, mission managers confirmed that the spacecraft’s solar arrays successfully deployed and the spacecraft was operating on its own power. 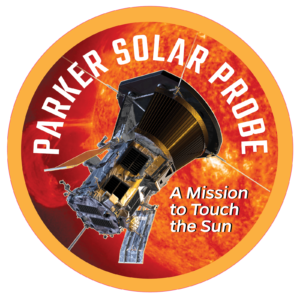 During its mission to “touch” the Sun, Parker Solar Probe will use gravity assists from Venus seven times over nearly seven years to gradually bring its orbit closer to the Sun. It will fly directly through the Sun’s atmosphere, as close as 3.8 million miles from its surface, closer to the surface than any spacecraft before it. The spacecraft will hurtle around the Sun at speeds up to 430,000 miles per hour. That’s about 210 times faster than a speeding bullet.

Parker Solar Probe will revolutionize our understanding of the Sun’s corona. Facing brutal heat and radiation, the spacecraft will fly close enough to watch the solar wind speed up from subsonic to supersonic, and fly through the birthplace of the highest-energy solar particles. Parker Solar Probe and its instruments will be protected from the Sun’s heat by a 4.5-inch-thick, carbon-carbon composite heat shield. The shield’s front surface will be able to withstand temperatures outside the spacecraft up to 2,500 degree Fahrenheit. While the inside, or back surface of the shield will withstand temperatures up to 650 degrees Fahrenheit.

For more than 60 years, scientist have wondered how energy and heat move through the solar corona and what accelerates the solar wind as well as solar energetic particles. Now, with the help of cutting-edge thermal technology that can protect the mission on its dangerous journey, the spacecraft’s four instrument suites will study magnetic fields, plasma and energetic particles, and image the solar wind.

In 2017, the mission was renamed for Eugene Parker, the S Chandrasekhar Distinguished Service Professor Emeritus, Department of Astronomy and Astrophysics at the University of Chicago. In the 1950s, Parker, a solar astrophysicist, proposed a number of concepts about how stars–including our Sun–give off energy. He called this cascade of energy the solar wind, and he described an entire complex system of plasmas, magnetic fields, and energetic particles that make up this phenomenon. Parker also theorized an explanation for the superheated solar atmosphere, the corona, which is–contrary to what was expected by physics laws–hotter than the surface of the Sun itself. This is the first NASA mission that has been named for a living individual.

Parker Solar Probe is part of NASA’s Living With a Star program to explore aspects of the Sun-Earth system that directly affect life and society. The Living With a Star flight program is managed by the agency’s Goddard Space Flight Center in Greenbelt, Maryland, for NASA’s Science Mission Directorate in Washington. The Johns Hopkins University Applied Physics Laboratory in Laurel, Maryland, manages the mission for NASA. APL designed and built the spacecraft and also will operate it.

Parker Solar Probe is the fourth mission for NASA’s Launch Services Program (LSP) this year. LSP is responsible for launch service acquisition, integration, analysis and launch management for each mission.

This concludes today’s coverage of NASA’s Parker Solar Probe countdown, launch and ascent into space for its mission to explore the Sun.

We have spacecraft separation. Cheers and applause can be heard from the launch teams as the Parker Solar Probe separates from the United Launch Alliance Delta IV Heavy third stage.  Next up is solar array deployment.

The Delta IV Heavy second stage has fired its RL10 engine for the second and final time and is now in a coast phase. Next up is second stage separation.

The Delta IV Heavy second stage is firing its small thrusters to position itself and the Parker Solar Probe into the proper position to fire its main engine for the final time during the mission. Everything remains on schedule for the flight.

The Delta IV Heavy upper stage main engine has started its burn following on-time booster engine cutoff and booster separation. This is the first of two planned burns for the second stage engine during today’s ascent. The payload fairing has been jettisoned.