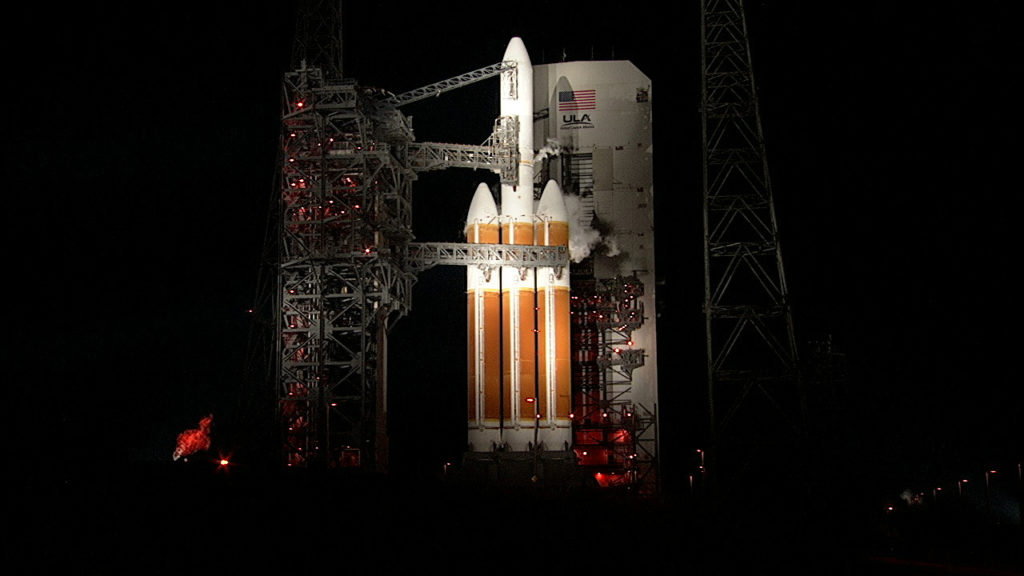 The rocket standing on the pad at Space Launch Complex 37 is a United Launch Alliance Delta IV Heavy configuration. The 233-foot-tall rocket is the world’s second highest-capacity rocket and most powerful rocket currently used by NASA. The launch vehicle consists of three Common Booster Cores, each with an RS-68A engine. Each engine produces 702,000 pounds of thrust for a combined total liftoff thrust of more than 2.1 million pounds.

A cryogenic second stage, powered by an RL10 engine, is on the center core. It is fueled by liquid hydrogen and liquid oxygen. The boosters are controlled by the second stage avionics system, which provides guidance, flight control and vehicle sequencing functions during the booster phases of flight.

For the first time ever, a solid fuel third stage, provided by Northrup Grumman, is part of the Delta IV Heavy rocket’s configuration. It is attached to the Parker Solar Probe and will help boost the spacecraft into the proper trajectory for its mission.

The Parker Solar Probe was moved from nearby Astrotech Space Operations in Titusville to Launch Complex 37 on July 30. The spacecraft was lifted and attached to the top of the Delta IV Heavy rocket in the Vertical Integration Facility. Parker Solar Probe will be the fastest human-made object in the solar system, traveling at speeds of up to 430,000 miles per hour (700,000 kilometers per hour).

This Delta IV Heavy will carry the Parker Solar Probe, humanity’s first mission to the Sun’s corona, on its journey to explore the Sun’s atmosphere and the solar wind. Launch is scheduled for 3:53 a.m. EDT.