There are lots of eyes on the Sun this week, as NASA’s Parker Solar Probe swings around our star on the seventh of its 24 scheduled orbits.

None are closer than Parker Solar Probe, which passed just 8.4 million miles (13.5 million kilometers) from the Sun’s surface while flying at 289,932 miles per hour (466,600 kilometers per hour) on Jan. 17, essentially matching its own records for solar proximity and speed. Around this same time, several spacecraft and dozens of earthbound telescopes were primed to contribute observations that will give scientists a comprehensive and coordinated picture of solar activity.

On Jan. 21, the spacecraft transmitted a “tone one,” indicating all systems were healthy and operating normally after the spacecraft’s close approach to the Sun and heading into the final stretch of the solar encounter, which runs through Jan. 23.

The geometry of this particular orbit means that Parker Solar Probe’s closest approach to the Sun, or perihelion, was in direct view of Earth. Some 40 observatories around the globe, including major installations in Hawaii, the southwestern United States, Europe, and Asia, trained their telescopes on the Sun over the several weeks around the perihelion. About a dozen spacecraft, including NASA’s STEREO, Solar Dynamics Observatory, TIMED, and Magnetospheric Multiscale missions, ESA and NASA’s Solar Orbiter, and ESA’s BepiColombo made simultaneous observations of activity stretching from the Sun to Earth.

“Parker Solar Probe has shown us that there is a lot more interconnected activity near the Sun than we once thought,” said Parker Solar Probe Project Scientist Nour Raouafi of the Johns Hopkins University Applied Physics Lab, or APL, in Laurel, Maryland. “With this closest approach visible from Earth, we have a fantastic opportunity to put as many eyes as we can on the Sun to help us build a big picture. And we really appreciate the enthusiastic cooperation of so many observatory and mission teams to make that happen.”

Now just over two years into its seven-year mission, the Parker Solar Probe spacecraft will eventually travel within 4 million miles of the Sun’s surface. The mission’s primary goal is to provide new data on solar activity and the workings of the Sun’s outer atmosphere – the corona – which contributes significantly to our ability to forecast major space weather events that impact life on Earth.

The spacecraft will make three more progressively close passes to the Sun in 2021 alone, as well as two gravity-assist flybys at Venus in February and October to adjust the trajectory of its orbit. After zipping past Venus on Feb. 20, Parker Solar Probe will again make close approaches to the Sun on April 29 and Aug. 9. Following another Venus gravity assist on Oct. 16, the spacecraft will make an even closer solar pass on Nov. 21, with perihelion just 5.3 million miles from the Sun’s surface.

“This is our busiest year since launch, and it only gets busier as our trajectory takes us closer and closer to the Sun,” said Parker Solar Probe Project Manager Helene Winters of APL. “This is exactly what the spacecraft was designed for – it’s operating just as we expected and is giving us even more data than anticipated. We’re ready for a range of discoveries in this unexplored region of the Sun.”

NASA’s Parker Solar Probe will make its next close approach to the Sun on Jan. 17, 2021, during its seventh science-gathering orbit around our star. At its closest approach to the Sun, called perihelion, the spacecraft will reach about 8.4 million miles (13.5 million kilometers) from the Sun’s surface, while traveling at a speed of around 289,930 miles per hour. 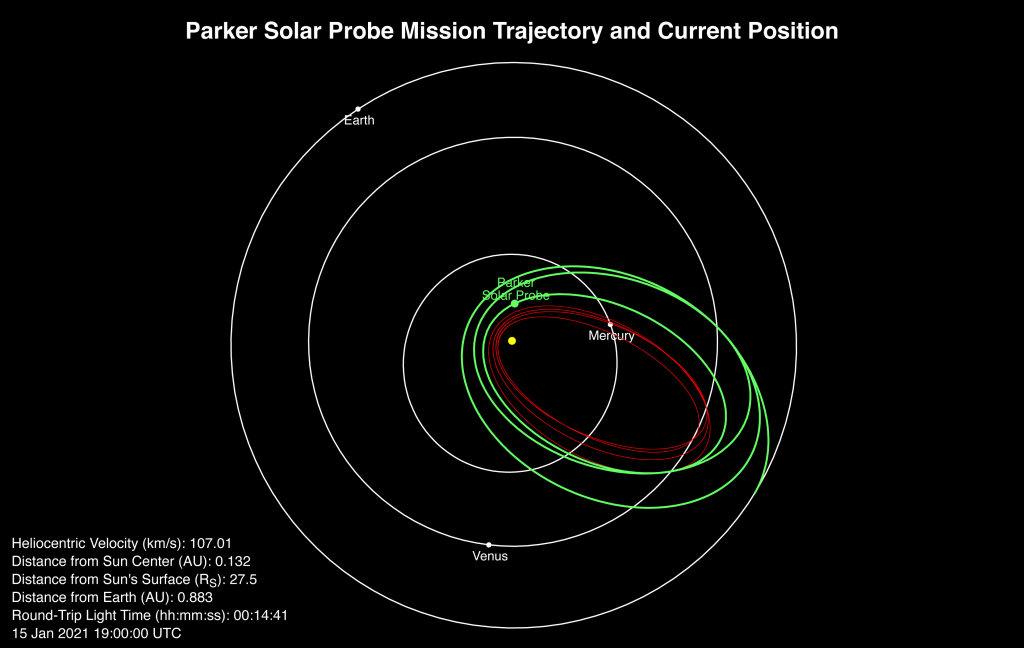