Greetings and Salutations!   I’m Dr. Orkan Umurhan, a scientist on New Horizons’ Geology and Geophysics Investigation (GGI) Team.  This is my first blog entry about my experiences on this most excellent mission. Over the upcoming months and years I intend to share the scientific questions I work on pertaining to New Horizons, and I hope that you will find them as fascinating as I do.

But first, a little about myself:  Although I’m on the GGI Team, I actually have a background in astrophysics with particular emphasis on astrophysical flows. I’ve done a lot of work on turbulence in protoplanetary disk environments, the very places where planets are known to form and grow. I have a lot of experience with extracting physical insights from complex flows. I really see myself more as a mathematical physicist. Some of my colleagues jokingly refer to me as the team’s “applied math mercenary,” a description that is not too far from the truth.

Just over two years ago, I was invited to join the New Horizons science team—probably being the last person to board the mission. While being both thrilled and honored to be involved, I wondered about how a scientist like me, who then knew very little about geology (rocks are hard!), could contribute in a scientifically meaningful way to the mission. The answer I received from both Alan Stern (our fearless captain and leader) and Jeff Moore (GGI Team lead, aka “Our GGI Platoon Leader”) is a testament to the uniqueness of this mission, its openness, and the cutting edge manner in which we conduct scientific inquiry.

They explained that the Pluto-Charon system is a place where we expect to see things we’ve never seen before, involving the behavior of ices and (possibly) fluids at temperatures and pressures that have not been adequately examined in the laboratory—nor have they been observed in any natural terrestrial system. Because this was going to be a fresh encounter with Nature, Alan and Jeff explained to me that they were determined to assemble as diverse a scientific team as possible, having a very wide spectrum of viewpoints and expertise on hand to interpret and debate the puzzling and weird things likely to be encountered.

As you probably know, Pluto has turned out to be a spectacular, awesome, active low temperature physics laboratory, full of conundrums and outright weirdness that has kept us all busy, fulltime.

In hindsight, one wonders why we were so surprised. For instance, the triple point (the location on the temperature-pressure phase diagram in which a material can coexist as solid, liquid and gas) of both carbon monoxide and molecular nitrogen is in the vicinity of 63 Kelvin (- 346 Fahrenheit), a temperature that is achievable on Pluto, given its distance from the sun.  We know from the Earth that when a system is near its triple point (as in the case of water), interesting phases can manifest, such as flowing water, glaciers and vapor. This is one of the reasons why the Earth and its surface morphology is such a cool place—no pun intended.

When we look at Pluto we see the informally-named Sputnik Planum (SP), which is probably a giant nitrogen ice sea, with a lot of methane and carbon monoxide to share the space. It has the texture of toothpaste and has flow timescales on the order of dozens of years.  We see in the surrounding mountain ranges evidence of glacier ice flowing into the basin of SP. The ice within the plains appears to be undergoing so-called “solid-state convection,” the overturning of the ice layer because it’s warmer below than above, which causes it to buoyantly rise to the surface. We see perplexing textures that look like pits and worms on various parts of SP, a phenomenon possibly due to the strong sublimation of nitrogen or possibly even methane. We see globules of glacier ice that look like coagulated jelly in various locations near the glacier flows.

Together with the other geologists and geophysicists in GGI, I work on aspects of all these odd-looking features and facets. I participate in debates over physical interpretation of the things we see but, more importantly, I bring my experience with flow modeling and dynamical evolution and apply them directly to setting up numerical mathematical models in order to evaluate the myriad of hypotheses we conjure up.

I’ll go into detail about some upcoming results in my next blog entry in early 2016, so stay tuned! 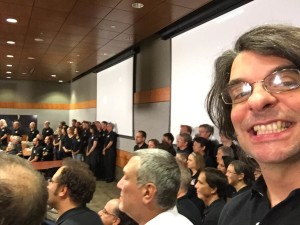