The New Horizons spacecraft is healthy and on final approach to explore Ultima Thule in the Kuiper Belt. On New Year’s Eve and New Year’s Day, New Horizons will swoop three times closer to “Ultima” than we flew past Pluto!

On Saturday, Dec. 15, the New Horizons hazard watch team concluded its work, having found no moons or rings in the path of New Horizons on its planned closest approach to Ultima. With that information and a unanimous finding by our mission stakeholders team, I informed NASA that we are “go” to fly by Ultima on the trajectory that yields the best science. As a result, New Horizons will approach to within 3,500 kilometers (about 2,200 miles) of Ultima early on New Year’s Day. There is no longer any chance we will divert to a farther flyby distance with consequently lower-resolution images.

Just yesterday, New Horizons conducted another small trajectory correction engine burn to help us home in on Ultima. That 0.26 meter/second burn lasted only 27 seconds and was executed perfectly by the spacecraft, cancelling about 300 kilometers (180 miles) of estimated targeting error and speeding up our arrival time by about five seconds. We will continue to track and target the spacecraft toward our expected arrival location and time. If needed, we can transmit files to New Horizons as late as the day before arrival to correct for any offsets from our flyby design, but we cannot burn the engines any longer. This is because New Horizons will soon enter Encounter Mode, which does not allow for engine burns.

Encounter Mode (or EM) is designed to ensure the flyby science even if the spacecraft malfunctions. Normally, if New Horizons develops problems in flight – which is very rare – the bird halts its flight plan and calls Earth for instructions. But if that were to happen during flyby closest approach, we’d likely miss getting the goods on Ultima before our mission control on Earth could intercede. After all, the round-trip communications time from Ultima to Earth and back is now over 12 hours.

Encounter Mode is the solution to this dilemma. Once the spacecraft is in EM beginning on Dec. 26, it will use onboard software to correct problems and then resume its activities without instructions from Earth. We used Encounter Mode at Pluto, but fortunately, no problems came up during that period. At Ultima we want the same level of flyby protection.

But before we can enter Encounter Mode, we must first transmit the entire sequence of thousands of carefully choreographed spacecraft and instrument commands to New Horizons’ main computer. That radio transmission will take place Dec. 20, and will be verified by a technique known as “checksums” on Dec. 21. The load will engage on Christmas Day, Dec. 25.

We are flying by Ultima to see a Kuiper Belt object up close for the first time. Ultima is special for two reasons. First, based on its orbit type, we know that Ultima was formed way out where New Horizons is, 4 billion miles away. That means Ultima (officially named 2014 MU69) was formed in the middle of the Kuiper Belt, where temperatures are close to absolute zero.

Second, because of where it was formed and the fact that Ultima is not large enough to have a geologic engine like Pluto and larger planets, we expect that Ultima is the most well-preserved sample of a planetary building block ever explored. In effect, Ultima should be a valuable window into the early stages of planet formation and what the solar system was like over 4.5 billion years ago.

What will Ultima reveal? No one knows. To me, that is what’s most exciting—this is pure exploration and fundamental science!

And when will we see what Ultima is all about? Close approach images, composition spectra and other kinds of data will already start to flow from New Horizons on flyby day—Jan. 1! We expect to have an image with almost 10,000 pixels on Ultima by that night, ready for release on Jan. 2. By that first week of January we expect to have even better images and a good idea of whether Ultima has satellites, rings or an atmosphere.

Early next year, megapixel images will be sent, and if they contain the target – shooting at this resolution while speeding by at over 32,000 miles per hour is a stretch goal – they will reveal Ultima’s geology in exquisite detail.

Fifty years before this flyby, at Christmas time 1968, I sat on my grandparents’ bed as a boy and watched Apollo 8 take off on the first human expedition to visit another world—our moon. That mission was also fast, it was challenging, and it yielded new knowledge. It was historic too. I will never forget it, nor the many talented people who made it possible and the three brave astronauts who flew aboard it.

Over all those years between Apollo 8’s December exploration and ours, NASA has made history by exploring farther and farther, oftentimes making what is very hard look very easy. Occasionally, missions stumbled. But most performed spectacularly, and as a result we have made Carl Sagan’s prediction that in just a generation or two the planets would be transformed from points of light to real and explored worlds. Equally important, NASA has shared the results of this exploration with people everywhere on this planet we call Earth, humankind’s cradle.

We on the New Horizons team are in awe of what Apollo 8 accomplished so long ago. With all the other missions of human and robotic exploration that came after, it opened up a solar system and a future that may soon see humans living on multiple worlds and robots exploring in new ways. The tradition of exploration is deep in homo sapiens; it sets us apart from other life here on Earth. Perhaps it’s something we may find in common with other spacefaring civilizations, if they exist.

Well, that’s my report for now. The flyby of Ultima Thule is literally now just days away. Onward now New Horizons, in the spirit of exploration, onward to 2019, and Ultima Thule!

And as always, keep exploring — just as we do!

There are many ways to follow New Horizons news and commentary on social media, such as these listed below. You can find others by searching the web.

p.s. You only have until midnight (EST) this Friday – Dec. 21 – to enter your name and a message to be radioed to Ultima Thule and New Horizons on flyby day at http://pluto.jhuapl.edu/Send-Greetings/ 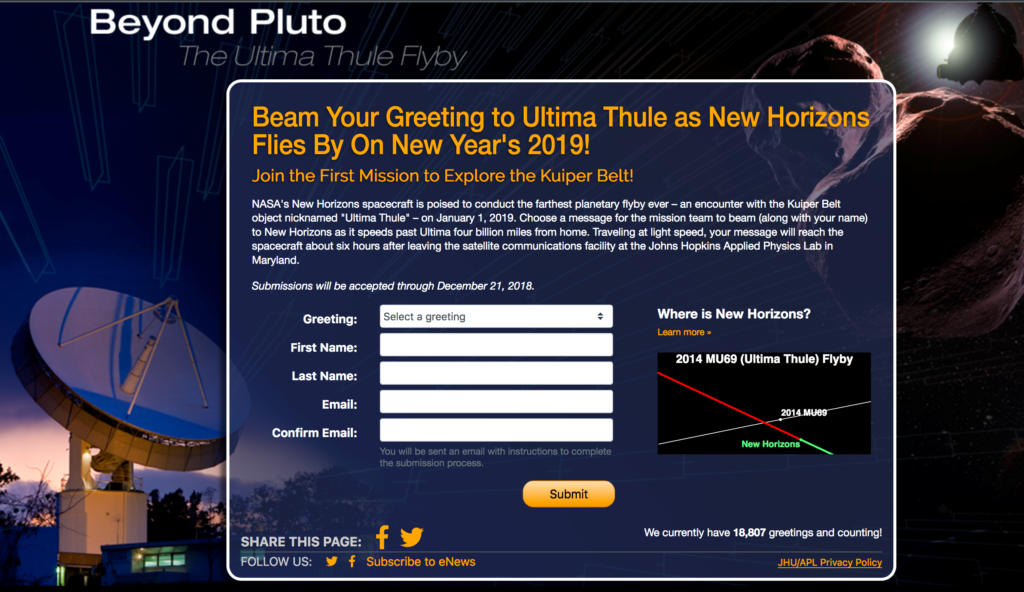