Blasting off into space is quite a scene. At the Kennedy Space Center everyone leaves their respective work areas and hurries outside as the countdown reaches its final minutes. The observers at Kennedy are joined by hundreds of thousands all across Florida, millions along the east coast of the U.S. and millions across the world; all now standing gazing in the direction of the launch pad or television sets, computers, waiting the final critical moments to pass; waiting for the space shuttle main engines and the solid rocket boosters to fire; ten-nine-eight-seven-six-five-four-three. 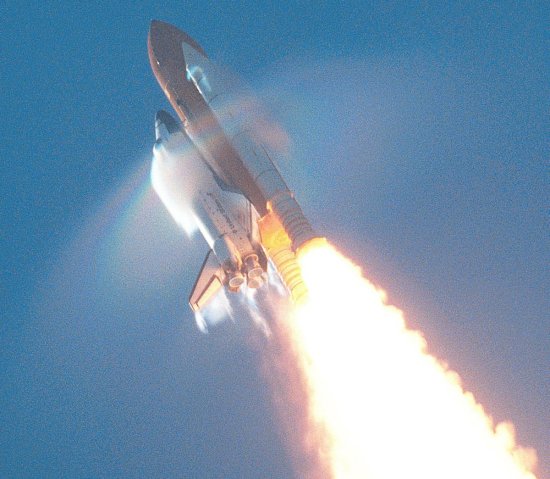 Finally, those last few agonizing nervous seconds drag by; breathing increases, stomachs tightening and as the external tank flows liquid oxygen and liquid hydrogen to the main engines, now firing; a bright orange light; two-one-ignition, and the solid rocket boosters ignite adding their red-rose-orange tint; smoke now billowing high as the blast of the engines and motors is dampened by jets of water flowing beneath space shuttle; the shuttle rises, slowly at first and then it seems to jump, and race into the skies. It all happens so fast. It is an amazing sight. You want it to last forever. Rockets hurling explorers into space…with a whole world of well-wishers yelling, “aw-ing,” cheering, crying, tears flowing, gasping for breath, spirits soaring from the ground as the shuttle roars and speeds off. In two and half minutes the shuttle reaches 165,000 feet and the boosters separate to fall to Earth. In eight and a half minutes the shuttle is in space and the external tank separates somewhere near Europe, never to be seen again. 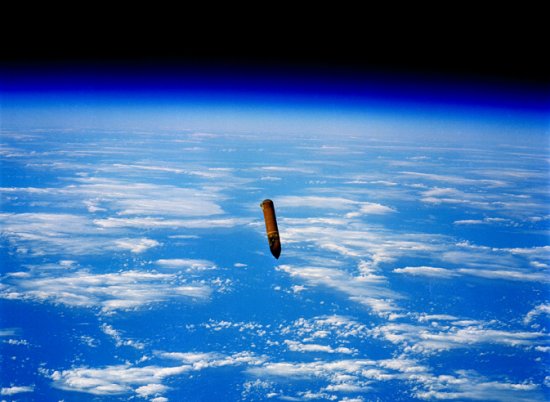 STS-29 mission onboard photo depicts the External Tank (ET) falling toward the ocean
after separation from the Shuttle orbiter Discovery. Credit: NASA

There are those who share this moment with the watching world and yet never lose their focus and their concentration on the data streaming to their work stations; telling them about the health and performance of the propulsion systems, the external tank, the space shuttle main engines, the solid rocket boosters and the solid rocket motors, as the shuttle tears away from gravity into the sky. These are very special people.

Marshall Space Flight Center in Huntsville, Ala., houses the team heading up the space shuttle propulsion systems. This is the NASA team responsible for the safe launch of the space shuttle all the way to tank separation at eight-an-a-half minutes into flight; the most critical phase of every mission to space. A lot rides on the shoulders of this team and this team is well aware of the seriousness of what they are all about.

The successful launch of the space shuttle is only the beginning of each mission. The shuttle propulsion team, officially known to NASA as the Shuttle Propulsion Office, works under the umbrella of the greater shuttle team, the Space Shuttle Program Office, which resides at the Johnson Space Center in Houston, Texas. With each successful launch teams at Marshall, Kennedy and Johnson huddle to discuss the millions of bits of data recorded during ascent to determine if the propulsion systems performed as desired. During the last launch, STS-128, Friday, August 28, the propulsion teams at Marshall were satisfied to gleam an excellent performance from all three propulsion systems; the official term being nominal performance. The review of this data will continue and actually never really end; periodically pulled for review and comparison at some point in the future. Currently, the propulsion teams are staging for the next launch, STS-129, scheduled for November. 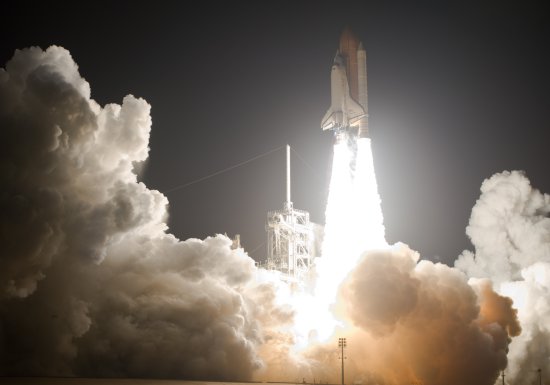 Working together, these teams of SpaceEngineers, will follow the data to consider changes needed immediately; which could delay the next flight; or changes needed or desirable over a longer term. Improvements to seals, thermal protection systems, hold-down posts, materials of many kinds, manufacturing and assembly processes, software changes, hardware changes, changes to test and analysis, certifications of all kinds are all in the daily work of the teams.

They meet a lot; face to face; and deliberate the pros and cons of suggested material and design changes; they confirm and they dissent. All are heard.  It is not an army that must quickly turn to face a new threat.  It is an army of thousands that follows the data and launches space shuttles safely. When they meet, an occasional expression of humor is the exception; a deep sense of focus, diligence and determination to do what is right prevails over all else. They know that space is the most unforgiving of all environments. They have all deeply felt the tragedy and loss of those who fly with the shuttles. These are SpaceEngineers.

Let’s meet the SpaceEngineers of Marshall’s Shuttle Propulsion Office. But before we do, there are two things I’d like you to know:  first, all of these SpaceEngineers rose up the ladder to their present positions of responsibilities through hard and dedicated work, accomplishing many difficult things, serving in many subordinate capacities, some being mentored by the SpaceEngineers of the Apollo/Saturn Program and early Space Shuttle Program, mentoring others in their own time, achieving much for the space program.  Without exception they have earned and worked hard for the heavy responsibilities they currently bear.

The Shuttle Propulsion Office manager is Steve Cash ($) of Huntsville, Ala., a graduate of the University of Alabama, Tuscaloosa, Ala.
(Roll Tide!)

The Shuttle Propulsion Office Deputy is Jody Singer of Hartselle, Ala., a graduate of the University of Alabama, Tuscaloosa, Ala.
(Roll Tide!)

The Shuttle Propulsion Office Technical Assistant is Yolanda Harris, pictured at right, of Decatur, Ala., a graduate of Tuskegee University, Tuskegee, Ala. (Go Tigers!) and the University of Alabama, Tuscaloosa, Ala.
(Roll Tide!)

The Shuttle Propulsion Office Chief Engineer is James W. Owen, of Dallas, Texas, and is a graduate of the University of Alabama in Huntsville.
(Go Chargers!)

The Space Shuttle Main Engine Office manager is Jerry Cook of Greenville, Ala., a graduate of the University of Alabama, Tuscaloosa, Ala.
(Roll Tide!)

The Reusable Solid Rocket Booster Project Office manager is David Beaman a native of Huntsville, Ala., and a graduate of the University of Alabama in Huntsville, Ala.
(Roll Tide!)

I haven’t said lot about this special PSEI team. Most of their work is done well before launch. As their title indicates, this team works across and pulls together the disciplines of the external tanks, the main engines and the solid rocket boosters to integrate work and resolve engineering challenges such as potential hazards  crossing over from one propulsion system to another; a kind of engineering coordination and monitoring group to insure engineering issues that affect all propulsion elements  such as aerodynamics, loading, and electromagnetic  effects are worked in an integrated manner.

The team lead of the External Tank Project Resident Office at the Michoud Assembly Facility in New Orleans is Patrick Whipps .He is the senior representative responsible for day-to-day operations involving the manufacture of space shuttle external tanks. He coordinates the work of engineers and other technical specialists engaged in the research, design and development that supports external tank production for the Space Shuttle Propulsion Office

Located within view of the Vehicle Assembly Building, the Resident Office keeps its hand on the pulse of Kennedy shuttle operations. Resident Office personnel also have an important role during tests, simulations and launches. They monitor data from the Marshall Engineering Support Area adjacent to the Kennedy Launch Control Center. In addition to the propulsion element staff, two members of Marshall’s Safety & Mission Assurance Office are part of the Resident Office team. 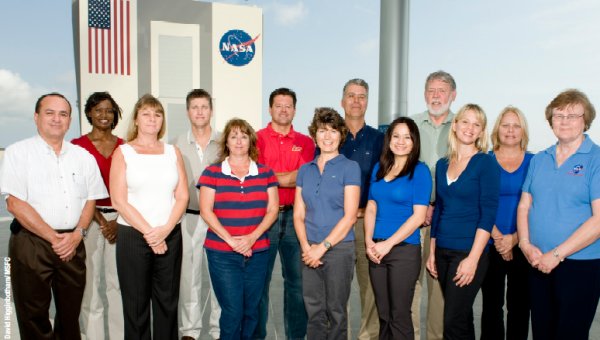 That’s the team that will likely fly out the remaining flights of the space shuttle.