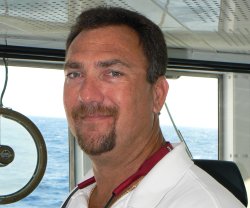 Let’s meet Todd Rose of USA Marine Operations, serving on this trip as Ordinary Seaman with primary duties of serving as bridge lookout with the officer of the bridge. Todd, 42, is a unique seventh generation Floridian who currently resides in Merritt island, Fla.

Todd normally takes care of the ship’s retrieval equipment, serves as a diver during retrieval operations and participates in the disassembly of the boosters.

Todd enjoys all aspects of his multifaceted job and his contribution to the space program.

When not on the job, he enjoys being with family, diving, fishing and drag racing.

Second  Mate Allan Gravina (Big Al), 36, is from Long Island, N.Y.,  and has served onboard Freedom Star for some nine years. As Second Mate, his responsibilities onboard ship include the maintenance of all navigational equipment and medical supply inventories. Typical of Second Mates, he stands two four-hour navigation watches when the vessel is under way.

Big Al currently holds a 1,600 ton mate’s license. A 1,600 ton ship would be like one of the medium-sized coast guard cutters you can see docked at Port Canaveral near the cruise ships.

When asked what he likes about his job he says, “the part I like about the job the most is that I am one of only 20 people in the world doing what I do. It helps that I love being on the water and being part of the space program.”

When not at work he spends time on his boat with his wife and family. 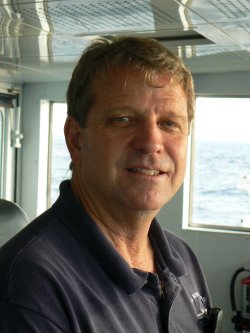 Let’s now meet the Liberty Star’s Second Mate, John Bensen, 57, of Miami, Fla. The second mate, or second officer, is a licensed member of the deck department of a ship, third in command of the ship, a watch keeping officer, and customarily the ship’s navigator. Other duties vary, but the second mate has often received medical training and may also be in charge of maintaining distress signaling equipment.

John Bensen, also known as Russ, JB  or Gunny, has been on board Liberty Star an amazing 26 years. He’s seen a lot of the space program in that time. During most launches John is located off shore and close to the booster separation and down range impact area of those same boosters. He has seen 115 launches. He has an associate degree in Marine Science from Miami-Dade Junior College in Miami. His responsibilities on board ship include the maintenance of all navigational equipment and medical supply inventories. Typical of Second Mates, he stands two four-hour navigation watches when the vessel is under way.

The part of the job he likes most is going to sea and completing the job on time, safe and error-free.

When not sailing with NASA, John is into Civil War reenactments throughout the South and keeping up with his three daughters. His nickname “Gunny” comes directly from his role servicing a Civil War artillery piece during reenactments. 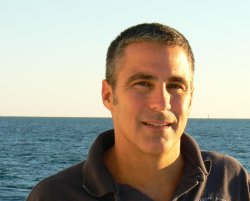 Today, I had the opportunity to sit down with Captain Michael (Mike) Nicholas for a few minutes.

He’s been sailing with the NASA booster recovery ships for 22 years and he holds a 1,600 ton Masters license upon oceans. Mike started work with the retrieval vessels when only 19 years old, in 1988, and has risen through the ranks from Ordinary Seaman to his current position of Relief Master. Quite an accomplishment in any career.

The 41-year-old, who claims Cape Canaveral, Fla., as home, oversees all operations of the vessel from safety, training and navigation to the accomplishment of the mission.

He says he may not have been an astronaut, but feels he’s a vital part of the space program. While it’s his job to ensure the Liberty Star, Pegasus barge and external tank make it safely from port to port, he’s also concerned with ensuring his “family” on the ship are well taken care of and learn during their time on the sea.

Mike enjoys the changing and challenging aspects of life at work on the sea. And believe it or not, when Mike is not on the ship, he still enjoys being on the water — fishing and diving. 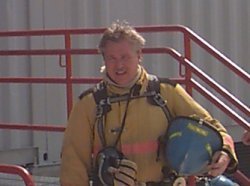 Joe Chaput participates in firefighting training at Cape Canaveral, Fla., as part of normal Coast Guard certification training. Some months ago, in preparation for this trip on board Liberty Star, I met Joe Chaput. He took me on a tour of Liberty Star and onboard the Pegasus Barge. He is in charge of NASA/USA maritime assets with headquarters at Cape Canaveral Air Force Station, Fla. We also talked by phone and e-mail several times and here’s how his very interesting career evolved.

Joe is a native of Evanston, Ill. (a northern suburb of Chicago) and was raised in neighboring Wilmette. Fishing with his dad and watching the shipping on Lake Michigan stirred his interest in working on the water. In 1983, he graduated from the U.S. Merchant Marine Academy in Kings Point, N.Y.  After the academy, he worked on supply vessels and then on military supply ships for Military Sealift Command (MSC). While aboard a MSC ship in Port Canaveral, he witnessed the Liberty Star and Freedom Star get under way. Having met his future wife and looking for a place to call home, he applied for a position with the NASA fleet. They happened to be crewing up for a third vessel and he was hired. He eventually worked his way up to Captain of the Liberty Star where he served for 11 years. He then was moved to Marine Operations Manager in 2001.

If you want to know how to jump-start a seaborne career, I bet a talk with Joe would do the job. Many thanks to Joe for making this trip possible for NASA public affairs.