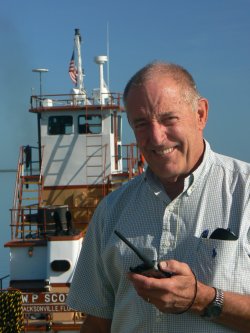 John Fischbeck III, 59, is a native of Honolulu, Hawaii, a graduate of Southern Illinois University, Carbondale, in business administration and a Navy veteran of the Vietnam War. His entire Navy service, 1965-1971, was spent aboard the aircraft carrier Yorktown.

In 1979, he completed training as a Merchant Marine Officer and today has achieved the highest rank in the commercial maritime industry, Master Mariner. At NASA/USA, he serves as solid rocket booster retrieval operations supervisor.

It is the highest level of professional qualification amongst mariners.

What does John like most about the job at sea? In his own words, “supporting America’s spaceflight program, the great team of people I work with, and the ever-changing conditions that confront us everyday. Challenge, Adjustment, Success!”

What does John like to do when not sailing with NASA?  He ships out again…on ocean yacht racing, sail cruising and studying the  guitar/banjo.