Past Cat island Liberty Star began extending its tow line from a more or less ideal length of approximately 500 feet in calm waters  to about 1,000 feet.  Current winds are easterly 14-21 knots or about 16-24 miles per hour and seas are running high enough to warrant a longer tow line reducing the shock, wear and tear on  Liberty Star, Pegasus and the towline. Captain Mike Nicholas began the process to pay out the additional tow line at about 1230 pm and completed the extension to 1,000 feet about 1:15 pm Eastern.   Throughout the payout procedure the crew on the bridge monitor a variety of data overseeing the tow line extension including distance of payout, tension on the tow line, tow line depth below the surface, and speed of the deploy of the additional line.   Pegasus’ flat bow makes for a somewhat more difficult towing operation in open water in comparison to barges with a pronounced bow, but the flat bow is better for towing in inland waters.  Liberty Star is now making 9.1 knots or 12 miles per hour.

Immediately upon leaving Michoud Assembly Facility this afternoon, we entered the Intracoastal Waterway and headed for Gulfport, Miss. Two commercial tug boats hooked up our tow from Pegasus and without fan fare we were off on the first leg of our trip to the Kennedy Space Center. We headed east in the somewhat confined limits of the waterway in about 15 feet of water and took in the local sights along the banks. I’ve crissed-crossed the Intracoastal Waterway almost all my life, but until now I’ve never traveled along it; another first for this trip. 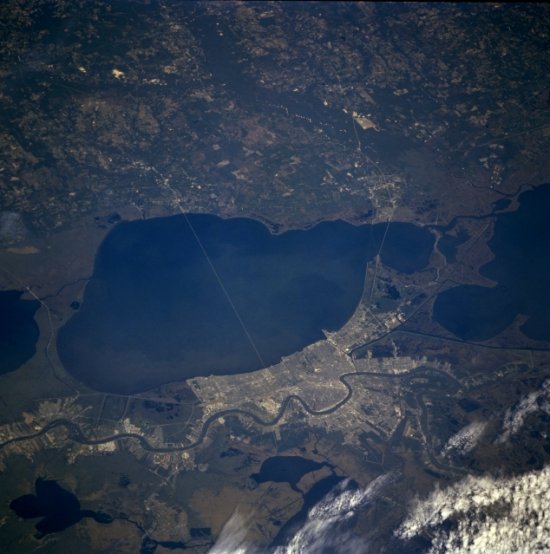 The Intracoastal Waterway is a 3,000-mile waterway along the Atlantic and Gulf coasts of the United States. Some lengths consist of natural inlets, salt-water rivers, bays, and sounds; others are man-made canals. It provides a navigable route along its length without many of the hazards of travel on the open sea. If you’ve been a tourist in Texas, Louisiana, Mississippi, Alabama, Florida, the Carolinas, Maryland or Virginia, you’ve crossed the waterway many times. 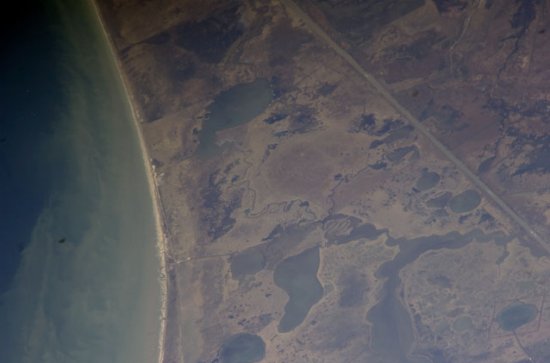 A view of a portion of the Intracoastal Waterway in Louisiana. Credit: NASA

The waterway runs for most of the length of the Eastern Seaboard, from its unofficial northern terminus at the Manasquan River in New Jersey, where it connects with the Atlantic Ocean at the Manasquan Inlet, to Brownsville, Texas.

Early in our trip we pass two waterways known as passes or inlets that intersect the Intracoastal Waterway and connect the Gulf and Lake Pontchartrain. Each of these waterways has its own silent guardian.

The Sentinels: Fort Macomb at Chef Menteur Pass and Fort Pike at Rigolets
The first pass is Chef Menteur Pass, a short water route connecting the Gulf of Mexico to Lake Pontchartrain. An earlier fort at the site was called Fort Chef Menteur. The current brick fort was built in 1822, and renamed “Fort Wood” in 1827, and renamed again, Fort Macomb in 1851. Both forts were envisioned to keep pesky enemy fleets out of Lake Pontchartrain and hence the shores of New Orleans.

The fort was occupied by Confederate troops early in the American Civil War, and taken rather quickly without a fight by the Union in 1862. The fort and its land are now owned by the State of Louisiana.

The similar three sided, but better preserved Fort Pike is situated some 10 miles away at the Rigolets Inlet and is open to visitors.

Leaving the confines of the narrow waterway we pass into the Mississippi Sound.

The Mississippi Sound is an open body of water that runs east-west along the coast from Waveland, Miss., to the Dauphin Island Bridge , Ala., a distance of about 90 miles. We will travel only about half that distance in the Sound. The Sound is bordered on its southern edge by the barrier islands — Cat, Ship, Horn, Petit Bois and Dauphin Islands — which are part of the National Park Service’s Gulf Islands National Seashore. Those islands separate the sound from the Gulf of Mexico.

Large portions of the Mississippi Sound reach depths of about 20 feet. Part of the Gulf Intracoastal Waterway traverses the sound with a project depth of 12 ft. The waterway, maintained by the U.S. Army Corps of Engineers, is designed for towboat and barge traffic. Most of its route through the sound is merely an imaginary line through water whose depth exceeds the project depth. A section west of Cat Island and the portion north of Dauphin Island rely on dredged channels marked by aids to navigation maintained by the U.S. Coast Guard.

Deepwater ports along the Sound include Gulfport, Miss., and Pascagoula, Miss. Dredged ship channels running basically north-south connect those ports to the Gulf of Mexico, running between pairs of the barrier islands.

Gulfport and More of Katrina
In the summer of 2008, I stopped by the Port of Gulfport to observe the transfer of Pegasus from the tug boats to the Liberty Star. The transfer went much faster than I anticipated, taking only about 20 minutes. Before I could count to 100, Liberty Star had snagged the tow from the commercial tug boats and was chugging out of port into the Mississippi Sound and on to the Gulf of Mexico. 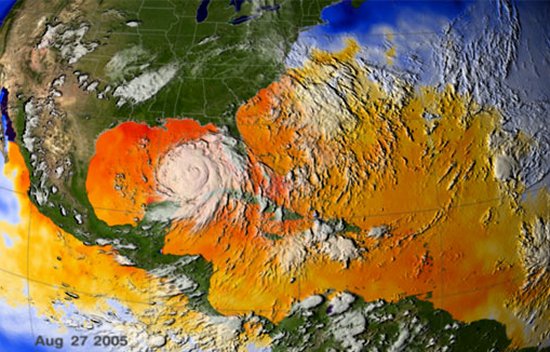 Katrina’s Category 4 hurricane force winds were observed by NASA’s QuikSCAT
satellite on August 29, 2005, just before she made landfall. Credit: NASA/JPL

Whereas New Orleans was essentially brushed by Katrina in 2005, the Port of Gulfport was hit head on. The storm surge in the Gulfport area was relentless, 20 feet above normal sea levels and pushed well inland taking everything in its path. The Port of Gulfport lost warehousing and hundreds of sea-land vans filled with poultry and foodstuffs. So much salt water was deposited inland that it destroyed a large swath of Mississippi forest; so much so, that the loss of forest in Mississippi is one of the largest in the history of our country.

During my 2008 visit to Gulfport I stayed overnight at the Marriot Hotel across the street from the Port of Gulfport. During breakfast the hotel master cook came out to talk and ask how we had liked our meal. The meal was great. I learned the cook had lost her father to Katrina and our waitress had lost her husband — both from broken hearts after Katrina. They were not among the 2,000 Katrina victims, but they should be.

Pegasus is fast (5 miles per hour) approaching the Rigolets Inlet. Upon reaching the Rigolets, Pegasus will be towed/pushed south into the eastern edge of Lake Borgne and then on into the Mississippi Sound proper. A 871 Detroit Diesel located below the crew quarters drones steadily, now providing all electrical power on board — internal lighting for the crew and electrical appliances, as well as external running lights required for safe waterborne operations.

A few minutes ago a fast-moving, high-riding fuel barge being pushed by a tug boat rapidly overtook Pegasus and disappeared down the Intracoastal Waterway. Another barge is moving toward us from the east. Lots of traffic tonight; exciting stuff! Tow cables snap occasionally against the tow bridle, caused when the tug boat slides from side-to-side to maintain its forward progress. Half the crew is sleeping, resting up for night watches that begin at midnight and 3 a.m.

The crew is sustained tonight by a hearty, piping hot chili packed with Ro-tel diced tomatoes and ; pinto/kidney/chili beans…cooked down earlier and eaten all evening, courtesy of this-blogger-turned-cook.

Aarg! Aarg! On to the Mississippi Sound!