Space shuttle Atlantis is on its way to its second stop today in its cross-country ferry flight, Columbus Air Force Base in Mississippi.

Atlantis and its modified Boeing 747 Shuttle Carrier Aircraft departed Lackland Air Force Base in San Antonio, Texas at about 12:37 p.m. EDT (11:37 a.m. CDT). The flight is expected to take about two hours.

Once Atlantis gets to Columbus Air Force Base managers will assess the weather and determine what the best route is to arrive at NASA’s Kennedy Space Center in Florida this evening. 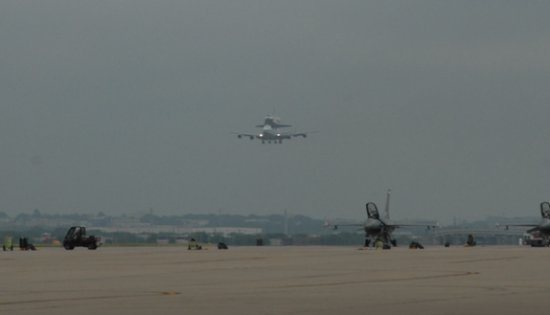 We just landed here at Lackland Air Force Base’s Kelly Field. I scrambled off the C-9 and made it out on the runway in time see Atlantis/SCA’s second Texas landing. We’ll have video soon! 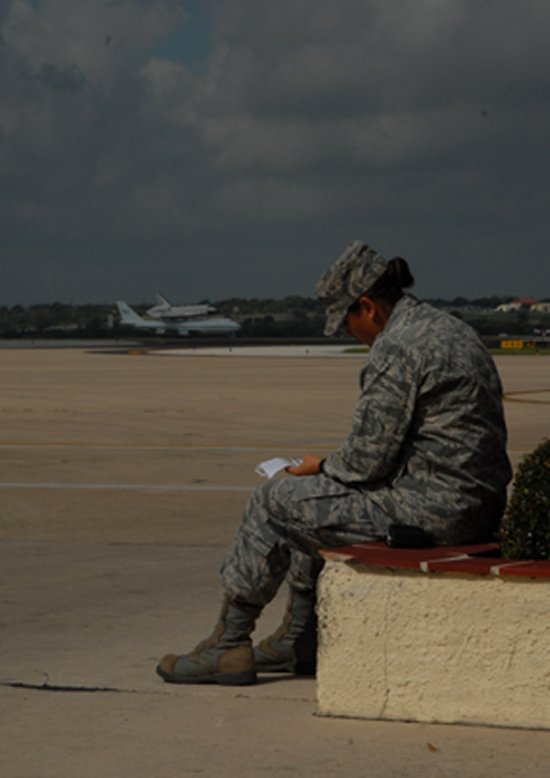 We’ll refuel here, take a minute for lunch and to get one last check of the weather forecasts and then be on our way to Mississippi.

Oh, and I’ve noticed in the comments several people are asking about why it is that the orbiter can’t fly in the rain since it’s not a problem if the orbiter gets rained on when it’s sitting on the launch pad. The answer is that the rain hits the orbiter’s tiles a lot harder when we’re flying over 300 mph than it does at the pad. At those speeds the rain would be like a shotgun blast to the tiles. (Have you ever held your hand outside your car window when you’re driving through a rainstorm?)