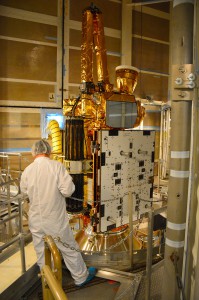 NASA’s Soil Moisture Active Passive spacecraft has been attached to the top of the United Launch Alliance Delta II rocket that will deliver it to orbit. Preparations for the Jan. 29 launch are on schedule at Vandenberg Air Force Base in California.

Payload carriers containing small satellites called CubeSats are being attached to the rocket’s second stage today. The next major milestone is encapsulation of the spacecraft inside the protective payload fairing, scheduled for Jan. 20.

The SMAP mission is designed to study moisture locked in Earth’s soil and help scientists better understand the planet’s water and carbon cycles, which could in turn lead to improved weather modeling and resource management. The Delta II rocket will launch the observatory into a polar orbit from Vandenberg’s Space Launch Complex 2.

7 thoughts on “SMAP Spacecraft in Place Atop Delta II Rocket”