The rocket’s three spent solid rocket motors have been released. The first-stage burn continues until main engine cutoff, or MECO, nearly four and a half minutes into the flight.

Telemetry Officer Steve Agid of United Launch Alliance is reporting a good performance from the Delta II as it continues to accelerate. 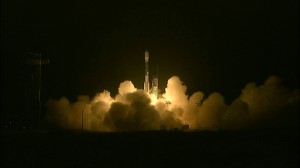 Liftoff of the Delta II rocket carrying NASA’s Soil Moisture Active Passive spacecraft, beginning a three-year mission to measure and map the water locked in Earth’s soil in greater detail than ever before. The rocket is climbing up and away from Space Launch Complex 2 at Vandenberg Air Force Base, California.

Range and weather are “go.”

The final minutes of the countdown are ticking away. Launch of the United Launch Alliance Delta II rocket with NASA’s Soil Moisture Active Passive observatory is targeted for 9:22 a.m. EST.

Final polling is complete and SMAP is configured for launch at 9:22 a.m. EST.

The Delta II rocket will depart the launch pad heading south at an azimuth of 196 degrees. The three ATK solid rocket motors will burn for 65 seconds and be jettisoned 99 seconds into flight. Delta II main engine cutoff will occur four minutes, 22 seconds after launch. Four minutes, 55 seconds after liftoff the Delta II fairing will be jettisoned, exposing SMAP to space. Second stage engine cutoff will occur at 10 minutes, 43 seconds, beginning a 40-minute coast phase. Then the second stage engine will restart for about 12 seconds, placing SMAP in the desired orbit. The spacecraft will separate from the Delta 56 minutes, 50 seconds into flight.

Upper level winds are now “green” and the final poll is coming up prior to release of the T-4 minute hold.

NASA Launch Manager Tim Dunn has polled his controllers and announced the NASA team is ‘go’ for launch of SMAP. Dunn remarked that the vehicle and spacecraft are healthy, the Western Range is clear and the weather is good. Upper level winds remain the concern.

This is the final planned hold of the countdown. Managers overseeing the launch will conduct final readiness polls and SMAP will be transferred to internal power.

The launch team now is targeting 9:22 a.m. EST to allow additional time to analyze upper level wind data in order to determine whether launch will be possible today.