The International Space Station mission management team, including all of the station Partners, met this afternoon and directed the station’s residents to return to the U.S. segment of the complex before the end of the day, systems permitting. The decision was made hours after the crew members were isolated in the Russian segment following an alarm that could have been indicative of an ammonia leak. The crew is in good condition, was never in any danger and no ammonia leak has been detected on the orbital laboratory. They were informed of the forward plan during their afternoon daily planning conference with flight controllers in Houston, Moscow and the other Partner flight control centers.

Around 3 a.m. Central time today, Station commander Barry Wilmore and Flight Engineer Terry Virts of NASA and Flight Engineer Samantha Cristoforetti of the European Space Agency were directed to don protective masks and move into the Russian segment, closing hatches behind them to the U.S. segment due to the annunciation of an alarm that is part of the environmental systems software on the station designed to monitor the cabin’s atmosphere.  At the same time, the station’s protection software shut down one of two redundant cooling loops (Thermal Control System Loop B).

Data received from a variety of system sources on board have been studied by flight controllers throughout the day and indicate no leakage of ammonia on the station. The alarms this morning that initiated the movement of the crew out of the U.S. segment are suspected to have been caused by a transient error message in one of the station’s computer relay systems, called a multiplexer-demultiplexer. A subsequent action to turn that relay box off and back on cleared the error message and the relay box is reported by flight controllers to be in good operating condition.

As a result, the crew will re-enter the station’s U.S. segment today wearing the same protective masks they donned earlier today and will conduct measurements of the atmosphere to make sure there are no traces of ammonia present. Assuming there is no indication of ammonia, the crew will doff their masks and will remain in the U.S. segment for nominal operations.

Meanwhile, flight controllers are continuing to analyze data in an effort to determine what triggered the alarm that set today’s actions in motion. Work to reactivate cooling loop B on the station will continue throughout the night and into the day Thursday. The crew members are expected to resume a normal complement of research activities on Thursday as well.

The six-member Expedition 42 crew is safe in the Russian segment of the International Space Station after an alarm went off in the U.S. segment of the orbital laboratory Wednesday morning.

Flight controllers are seeing no direct evidence of an ammonia leak and are exploring the likelihood a faulty sensor or computer relay set off the alarm.

The Expedition 42 crew members are safe and in good shape inside the Russian segment of the International Space Station following an alarm in the U.S. segment at about 4 a.m. EST.

The crew received an update from spacecraft communicator James Kelly that it’s starting to look like a false indication, either a faulty sensor or computer relay. Flight controllers are continuing to analyze the situation but for now, there is still no direct evidence that ammonia was leaked into the station atmosphere.

› Listen to the update from spacecraft communicator James Kelly here

The Expedition 42 crew members are safe and in good shape inside the Russian segment of the International Space Station following an alarm in the U.S. segment at about 4 a.m. EST.

Flight controllers in Mission Control at NASA’s Johnson Space Center in Houston saw an increase in pressure in the station’s water loop for thermal control system B then later saw a cabin pressure increase that could be indicative of an ammonia leak in the worst case scenario. Acting conservatively to protect for the worst case scenario, the crew was directed to isolate themselves in the Russian segment while the teams are evaluating the situation. Non-essential equipment in the U.S. segment of the station was also powered down per the procedures.

In an exchange at 7:02 a.m. with Expedition 42 Commander Barry Wilmore of NASA, spacecraft communicator James Kelly said flight controllers were analyzing their data but said it is not yet known if the alarm was actually triggered by a leak or whether the situation was caused by a faulty sensor or by a problem in a computer relay box that sends data and commands to various systems on the station.

NASA TV will provide a live update at 7:45 a.m. ET at https://www.nasa.gov/nasatv

The hatches to Dragon were opened for business Tuesday morning at 3:23 a.m. EST and the crew began unpacking critical gear that will support 256 science experiments. The SpaceX commercial cargo craft was attached Monday to the Harmony module at 8:54 a.m.

› Read more about the arrival of the SpaceX CRS-5 mission

One experiment that was immediately set up by Flight Engineer Terry Virts was the Micro-5 study. That experiment observes microorganisms as a model for humans so scientists can understand changes in a crew member’s immune system and the risk of infectious disease in space.

For an overview of newly delivered science investigations aboard Dragon, visit: https://www.nasa.gov/spacex

While the International Space Station was traveling over the Mediterranean Sea, Expedition 42 Commander Barry “Butch” Wilmore of NASA, with the assistance of Flight Engineer Samantha Cristoforetti of the European Space Agency, successfully captured the SpaceX Dragon spacecraft with the station’s robotic arm at 5:54 a.m. EST.

NASA TV coverage of operations to berth Dragon to the space station will begin at 7:45 a.m. 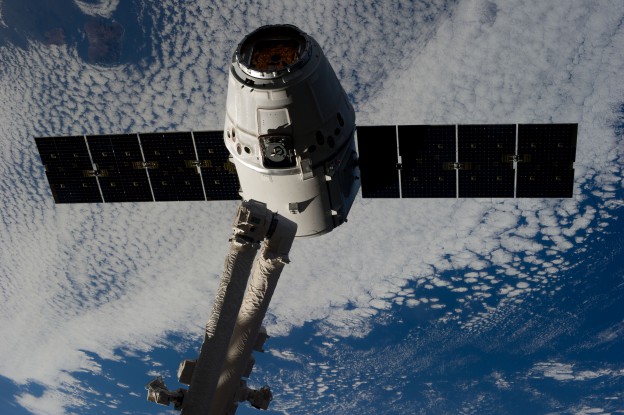 The International Space Station and Dragon flight control teams are proceeding toward rendezvous and grapple at 6:12 a.m. EST on Monday, Jan. 12.

NASA Television coverage of rendezvous and grapple will begin at 4:30 a.m.: https://www.nasa.gov/nasatv

To learn more about the mission and the International Space Station, visit: https://www.nasa.gov/station

To join the online conversation about the SpaceX CRS-5 launch, the International Space Station and Expedition 42 on Twitter, follow the hashtags #ISScargo, #ISS and #Exp42. To learn more about all the ways to connect and collaborate with NASA, visit: https://www.nasa.gov/connect. 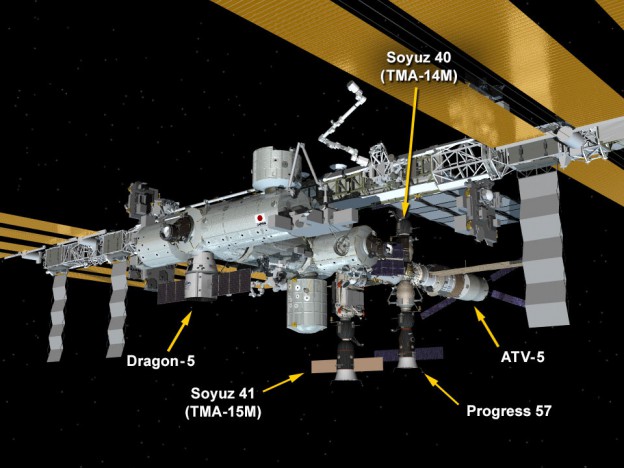 The Expedition 42 crew is getting ready for a delivery aboard the Dragon commercial cargo craft as well as next month’s departure of Europe’s fifth and final Automated Transfer Vehicle (ATV-5).

The weather looks favorable for Saturday’s planned launch of Dragon aboard a Falcon 9 rocket at 4:47 a.m. EST. Dragon will arrive at the International Space Station Monday morning carrying more than 5,000 pounds of supplies, payloads and critical research.

Commander Barry Wilmore and Flight Engineer Terry Virts worked on readying the ATV-5 resupply craft for it’s undocking from the Zvezda service module and departure Feb. 27. It will reenter the Earth’s atmosphere loaded with trash and discarded gear for a fiery disposal over the Pacific Ocean.

Read more about the launch and docking of the ATV-5 last summer. 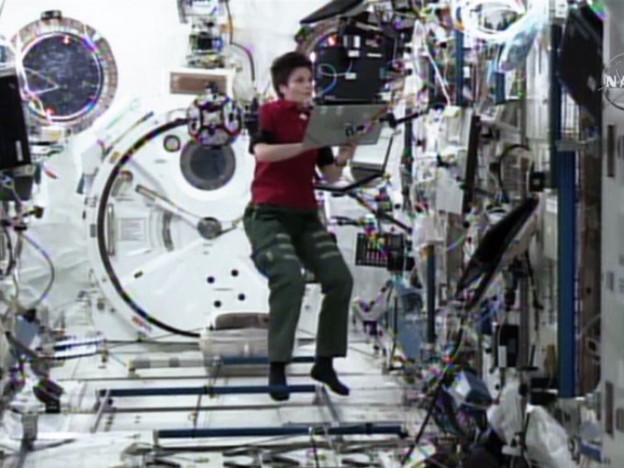 SpaceX engineers swapped out a suspect thrust vector control actuator in the second stage of their Falcon 9 rocket that halted Tuesday’ s launch of its Dragon commercial cargo craft. Dragon’s launch atop the Falcon 9 is now set for Saturday at 4:47 a.m. EST with live NASA Television coverage scheduled to begin at 3:30 a.m.

Thursday’s Expedition 42 science highlights included a pair of advanced remote control experiments inside the International Space Station. One experiment is studying the feasibility of controlling robots on the ground from space with a crew member using an advanced joystick that provides haptic feedback. The other uses bowling ball sized satellites, known as SPHERES, programmed by competing teams of high school students to accomplish tasks relevant to future space missions.

Another experiment is researching acoustic methods for locating punctures on the outside of the space station caused by human activity or micrometeoroid impacts. Crew members also studied the plasma environment in the station and photographed the ongoing man-made and natural changes to the Earth’s surface.