Commander Gennady Padalka and One-Year crew member Mikhail Kornienko are getting ready for the Sunday arrival of a resupply ship. NASA astronaut Scott Kelly worked throughout the day on a variety of advanced microgravity science.

Roscosmos, The Russian Federal Space Agency, is counting down to its launch of the ISS Progress 60 (60P) cargo craft at 12:55 a.m. EDT Friday. Padalka and Kornienko trained for the approach and docking of 60P scheduled for Sunday at 3:13 a.m. The ISS Progress 60 will deliver more than 3 tons of food, fuel and supplies to the crew.

Kelly started Tuesday on botany research exploring how plants sense gravity and how roots grow in space. The One-Year crew member also collected gear from the completed Rodent Research-2 experiment which may be used on future life science studies.

The Expedition 44 trio will not see the SpaceX Dragon cargo craft arrive Tuesday after the Falcon 9 rocket was lost about 139 seconds after launch Sunday morning. The crew now turns its attention to another resupply mission, ongoing science activities and routine orbital maintenance.

The International Space Station is well stocked with plenty of supplies and consumables through October. Meanwhile, a Russian resupply ship is getting ready for its launch Friday at 12:55 a.m. EDT. The ISS Progress 60 will deliver more than 3 tons of food, fuel and supplies to the crew and dock to the Pirs docking compartment after a two-day ride.

The three orbiting residents Commander Gennady Padalka and One-Year crew members Scott Kelly and Mikhail Kornienko are also getting ready for another set of crew members due to arrive at the end of July. On the ground, Soyuz Commander Oleg Kononenko and Flight Engineers Kjell Lindgren and Kimiya Yui are in Russia training ahead of their July 22 launch in a Soyuz TMA-17M spacecraft.

SpaceX CRS-7 lifted off from Space Launch Complex 41 at Cape Canaveral Air Force Station at 10:21 a.m. EDT today, on the company’s seventh resupply mission to the International Space Station. At roughly 139 seconds after launch, the Falcon 9 rocket experienced an anomaly which resulted in the loss of the vehicle.

Prior to launch, the SpaceX team was not tracking any issues. SpaceX will lead the accident investigation with support from NASA and oversight from the Federal Aviation Administration which issued the launch license. SpaceX will return to launching cargo to the space station as soon as it is safely possible. Initial data points to a potential issue with the second stage of the Falcon 9 rocket.

The Expedition 44 crew aboard the station remain in good shape in terms of supplies with adequate levels until at least October even without the upcoming Progress launch. Significant vehicle and research hardware was lost, including the first of two International Docking Adapters, but NASA will work to replace these items on future cargo flights. There is no immediate impact to station operations.

The next cargo launch to the space station is scheduled to take place at 12:55 a.m. Friday, July 3, with the Russian Progress 60P vehicle planned to deliver several tons of food and supplies to the station crew. Today’s events are not expected to impact the launch of the next station crew on July 22.

For residents near the launch zone, if you spot debris in the water or see it washed up anywhere along the Eastern Florida shore report it to either NASA’s debris reporting hotline at 321-867-2121 or Patrick Air Force Base at 321-494-7001 or contact your nearest local law enforcement official. 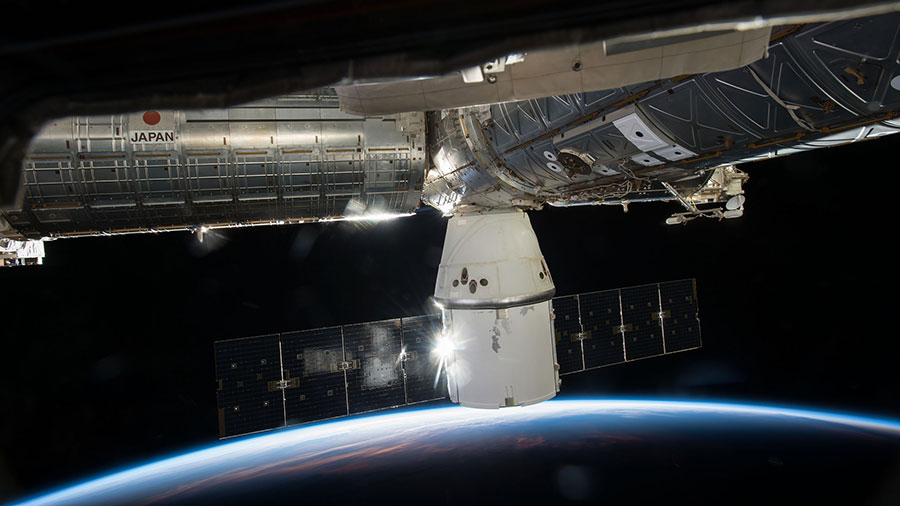 SpaceX CRS-7 lifted off from Space Launch Complex 40 at Cape Canaveral Air Force Station at 10:21 a.m. EDT. After liftoff, an anomaly occurred. SpaceX is evaluating the issue, and NASA Television will carry a news conference no earlier than 1 p.m.

Something went wrong with the launch. SpaceX is evaluating the status of the mission. NASA Television is continuing its broadcast at: https://www.nasa.gov/nasatv

Kelly will be inside the cupola and at the controls of the Canadarm2 when the Dragon space freighter arrives Tuesday morning at the International Space Station. Padalka will back up Kelly monitoring systems as Dragon approaches. NASA TV will cover the Sunday launch and Tuesday capture activities live.

There is a 90 percent chance of favorable conditions for Sunday morning’s SpaceX Dragon launch from Cape Canaveral Air Force Station in Florida. Dragon is delivering over 4,000 pounds of supplies, gear and research in its pressurized section. The largest payload being delivered is the first of two international docking adapters in Dragon’s unpressurized section.

The Expedition 44 trio aboard the International Space Station participated in a variety of medical science today. The crew is also preparing for the arrival of SpaceX CRS-7 scheduled for Tuesday morning.

Commander Gennady Padalka and NASA astronaut Scott Kelly got together in the morning for ultrasound scans of their eyes with assistance from specialists on the ground for the Ocular Health study. Kelly also partnered with his fellow One-Year crew member Mikhail Kornienko for the Fine Motor Skills experiment that observes how astronauts operate and repair interactive, touch-based and sensitive technologies in space.

SpaceX is counting down to its launch of the Falcon 9 rocket carrying the Dragon cargo craft Sunday at 10:21 a.m. EDT. Dragon will deliver all kinds of investigations enabling research into growing food in space, the chemical composition of meteors entering Earth’s atmosphere and the causes of cancer and impaired immune systems. Among the international investigations are also student investigations.

The largest payload being delivered on SpaceX CRS-7 is the first of two international docking adapters (IDA #1). The IDA #1 will be installed on the forward port of the Harmony module so future commercial crew vehicles can dock at the space station.

The International Space Station will see two new spacecraft over six days beginning June 30. Three orbiting residents are preparing for the new arrivals with training on a pair of different rendezvous and approach systems.

SpaceX CRS-7 will launch Sunday at 10:21 a.m. EDT. The SpaceX Dragon cargo craft will arrive Tuesday morning to be captured by the Canadarm2 at approximately 8 a.m. The next Russian resupply mission, ISS Progress 60, is due for launch early July 3rd and dock to the Pirs docking compartment two days later.

Commander Gennady Padalka and fellow cosmonaut Mikhail Kornienko refreshed their skills on the telerobotically-operated rendezvous system, also known as the TORU, located in the Zvezda service module. If necessary a crew member could use the TORU to manually dock an approaching Progress cargo craft in case of an emergency.

One-Year crew member and NASA astronaut Scott Kelly later partnered up with Padalka for more training on the robotics system that will be used to capture Dragon next week. Kelly will be at the controls of the Canadarm2 inside the cupola when Dragon arrives while Padalka monitors systems and backs him up.

A pair of Expedition 44 crew members are training for next week’s arrival of SpaceX CRS-7. Another crew member is practicing for the rendezvous of an upcoming Russian resupply mission. Meanwhile, science is ongoing aboard the International Space Station.

One-Year crew member Scott Kelly and station Commander Gennady Padalka partnered up for another session of robotics training. Kelly, with assistance from Padalka, will guide the 57.7 foot long Canadarm2 to capture the SpaceX Dragon about 7 a.m. EDT on June 30. Dragon’s launch atop a Falcon 9 rocket is planned for Sunday at 10:21 a.m.

Kelly’s fellow One-Year crew member Mikhail Kornienko practiced using the telerobotically-operated rendezvous system which would be used to manually dock an approaching Progress cargo craft in case of an emergency. The next Russian resupply mission, ISS Progress 60, is due for launch early July 3rd and dock to the Pirs docking compartment two days later.

The crew was right back at work again today on the Microbiome study researching microgravity’s effect on an astronaut’s immune system. For the Motocard experiment the crew explored astronaut motion in space to potentially improve physical training. The crew also researched acoustic methods to locate micrometeoroid impacts on the station for the Proboy study.

The orbiting Expedition 44 trio is counting down to next week’s arrival of the SpaceX CRS-7 mission. The station inhabitants also participated in an emergency drill and advanced microgravity science.

One-Year crew member Scott Kelly is training for the robotic capture of the Dragon supply ship set for about 9 a.m. EDT June 30. Commander Gennady Padalka will be his backup monitoring systems during the rendezvous and approach. Dragon will launch atop a Falcon 9 rocket from Cape Canaveral, Fla., Sunday at 10:21 a.m.

Padalka, Kelly and Flight Engineer Mikhail Kornienko practiced an emergency Soyuz evacuation drill on Monday. In the unlikely event the crew would need to escape from the space station during an emergency, they would use a Soyuz spacecraft as a lifeboat and return to Earth.

Science is always ongoing onboard the orbital laboratory with the crew and ground researchers exploring a variety of subjects. On the life science front, the crew members looked at how living in space affects an astronaut’s immune system for the Microbiome experiment.