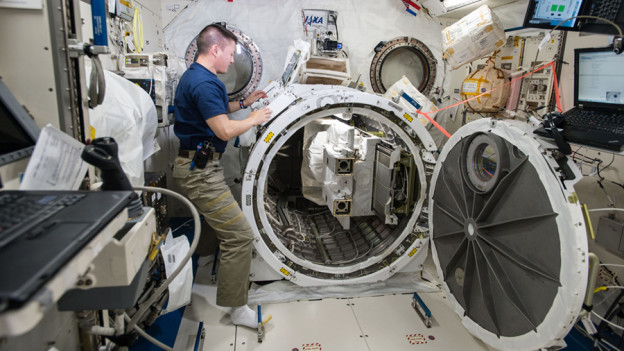 The hatches were opened today to the new space delivery from Russia’s Progress resupply craft. The Expedition 45 crew also worked on orbital lab maintenance and on science to improve life on Earth and in space.

The Progress 61 space freighter arrived at the International Space Station Thursday evening delivering more than three tons of food, fuel and supplies six hours after its launch from Kazakhstan. The vehicle is docked to the Zvezda service module and ready for two months of cargo transfer activities. Japan’s delivery space ship, the Kounotori HTV-5, finished its five-week stay at the space station Monday morning.

The six station residents were busy throughout the U.S. and Russian segments on a wide variety of activities. Commander Scott Kelly performed high-tech plumbing work as he replaced gear in the Water Processing Assembly. NASA astronaut Kjell Lindgren built a custom tool for lubricating the tip of the Canadarm2 robotic arm, which he and Kelly will do on a spacewalk at the end of October. Japanese astronaut Kimiya Yui installed a Cubesat deployer, and then worked on plant science. 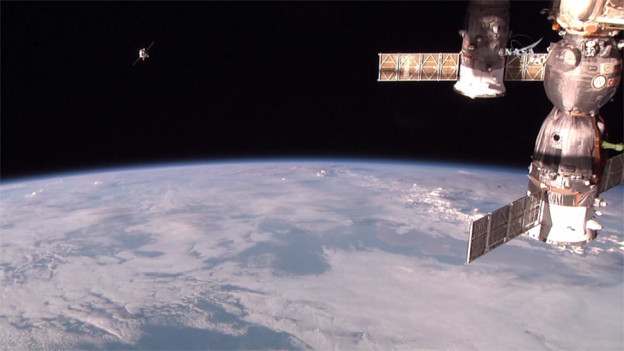 Beginning at 6:15 p.m. EDT today, NASA Television will provide live coverage of the docking of a Russian Progress spacecraft carrying more than three tons of food, fuel and supplies for the Expedition 45 crew aboard the International Space Station.

ISS Progress 61 is on track to complete a four-orbit rendezvous, and is scheduled to automatically link up to the rear port of the Zvezda service module at 6:54 p.m. The Expedition 45 crew will monitor key events during the spacecraft’s automated rendezvous and docking.

Watch the docking live on NASA TV or at https://www.nasa.gov/nasatv.

Launch of ISS Progress 61 from the Baikonur Cosmodrome in Kazakhstan occurred at 12:49 p.m. today (10:49 p.m. local time in Baikonur).

The spacecraft will remain docked to the station for two months.

At the time of launch, the space station was flying above Southeast Kazakhstan.

Less than nine minutes after launch, the resupply ship reached preliminary orbit and deployed its solar arrays and navigational antennas as planned. The Russian cargo space craft will make four orbits of Earth before docking to the rear port of the Zvezda Service Module at 6:54 p.m.

Watch live on NASA TV and online at https://www.nasa.gov/nasatv.

At 12:30 p.m. EDT, NASA Television will provide live coverage of the launch of a Russian Progress spacecraft carrying more than three tons of food, fuel and supplies for the Expedition 45 crew aboard the International Space Station.

Watch the launch live on NASA TV or at https://www.nasa.gov/nasatv.

Following a fast-track, four-orbit journey, Progress 61 is scheduled to automatically link up to the rear port of the Zvezda Service Module at 6:54 p.m. It will remain docked to the station for about two months.